You Made Me Promises, Promises

I make myself at least 18 promises a day. I never keep them.

Whatever. I never believe my promises anyway.

Instead of a real blog update (today's promise was to blog about the Spartan Race), I'll give you a cute picture of Mo sticking her tongue out at me. I guess she doesn't like tutus. 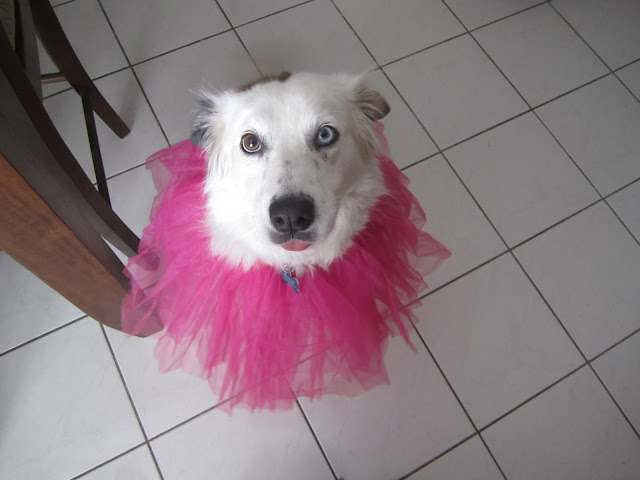 Posted by Diamond Girl at 9:01 PM No comments:

AZ Central ran an article about the Scavenger Dash. They interviewed me for it and quoted me like crazy!

Nice article, huh? Too bad I lied to the reporter. I told her that Christy and I finished first in the first Scavenger Dash and that we won that year's costume contest. It would have been a good idea to re-read my blog prior to the interview to remind myself that we actually placed second in the race and second in the costume contest. Oops. I guess my memory thinks very highly of me.

Let's do costumes first. Our team name this year was Assault With a Deadly Weapon. 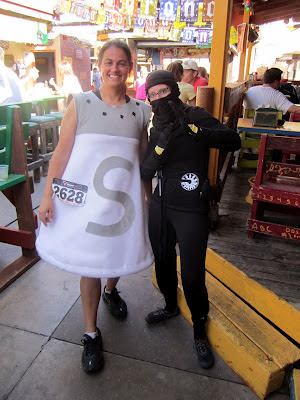 Get it? Christy is a salt and I am a ninja, and ninjas are known to be deadly weapons! I think that the audience applause-o-meter gave us a tie for first, but I'm probably biased. The prize went to Cowboy and Indian, which was a boy in a cow suit and a girl dressed as an indian. They were cute and clever so no bad feelings here.

The race this year was held in Scottsdale. I don't know Scottsdale all that well so I wasn't putting any high hopes into winning. I meant to spend a day walking around the area prior to the race and taking the buses and trolleys, but I never actually did. Lazy. I wasn't very happy with the maps I'd printed out because my printer ink was running out. I got to the race about 30 minutes early so I decided to walk to the visitor's center to get a real map. I followed the signs to the visitor center, but I never found it. Not a good sign!!

In the pre-race meeting, the race director told us that all of the checkpoints were within a 3 mile radius. Well, that eliminated the need for buses and trolleys. Whew! She then announced that our clue sheets were to be handed out at the Naked Chocolate stand at the Scottsdale Farmer's Market and everyone started running. We didn't know where that was so our strategy became to follow the crowd since they all looked like they knew where they were going. Luckily, they all did!

We got our clues and I emailed a picture of them to Kiri, our very super-awesome clue solver. She didn't get the email. We tried again. In the meantime we were also solving the easier ones and mapping all our checkpoints. Some clues involved no solving such as "find a license plate on a car from a state that starts with M" and "get a picture of both of you jumping in the air." By the time Kiri got our email, we only needed her to solve a few of the clues.

We took our jumping picture while still at the Farmer's Market. One clue done. I have mad ninja skillz: 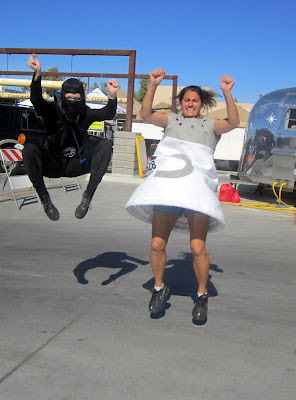 While Kiri was solving, we ran to the first challenge site, as it was only a block away. There we had to maneuver these furniture dollies through the cones with only a stick to steer and propel us. I went first, which I should never do on challenges. Christy is way better at figuring out the fastest way to do stuff and should always go first so she can give me pointers. I, not surprisingly, took forever to get my dolly there and back. When Christy started out she was weaving in to everyone else's weaving out. Here she is about to crash into the people weaving the other direction: 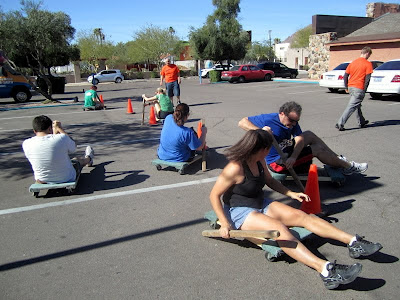 I told her she'd do much better if she started over and went with traffic so she didn't keep hitting people. So, she brought the cart back and started over. I mapped the rest of the clues that Kiri had solved while Christy quickly finished the challenge. On our way to our next stop she told me that she wouldn't have had to start over as she figured out how to maneuver faster than the other racers so they wouldn't have been in her way after all. I replied that if we lost "by, oh gee, about 13 seconds" then I would take the blame.

We found our car with an M license plate on our way to the next challenge: 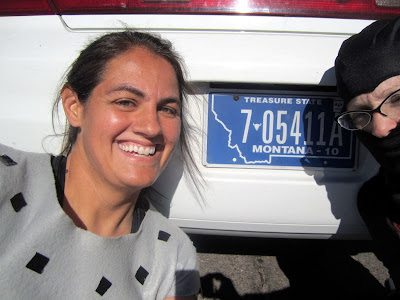 We still had one clue left to map, but we headed out to a checkpoint at Scottsdale Stadium, taking the risk that we wouldn't be missing any checkpoints in the area we passed to get there. When we completed our task at Scottsdale Stadium we mapped the last point and our risk paid off. The final spot was the furthest out and was easily added to our plan of attack.

The hardest challenge was next. We had to balance a ping pong ball on a ping pong paddle while walking a short course that included crossing a bridge, going down a hill, going up a hill and weaving though cones. The wind wasn't very strong but it doesn't take much to blow a ping pong ball off a paddle. Brian and Irene had the most trouble with this one. Christy did it in one try. I dropped the ball a few times before I was successful. These are our racing friends and rivals, Johnny and Kelly: 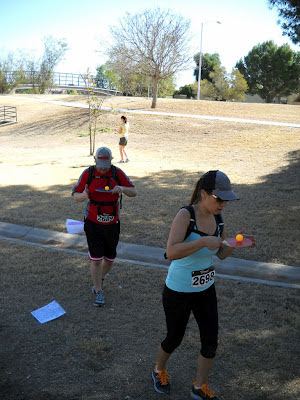 Off we ran to hit the rest of our checkpoints. We had to find two people in cowboy boots. We wasted some time taking pictures with single people in boots thinking that maybe we could turn in two separate pictures. We then found this pair and got the picture: 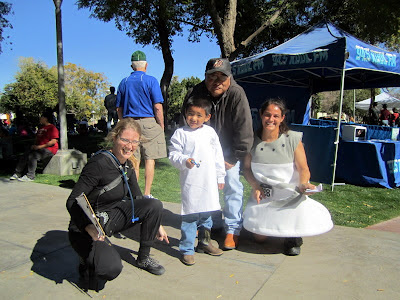 We ran some more. We did some more checkpoints and a challenge that involved sticking your noses in vaseline and transporting cotton balls without your hands. We tried a short-cut through a neighborhood but it was a bunch of dead ends up against a canal. Crap! We knew the "short-cut" was a risk, but neither of us felt like running the half mile back to where we deviated off the map. So we wove through the neighborhood looking for an outlet. We ended up crawling through fences: 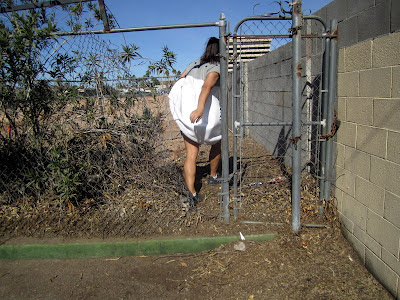 and jumping over a wall to get back on track. It's not every day you see a salt shaker jump a wall so I had to stop to take pictures: 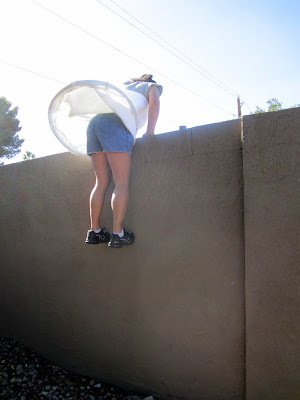 We finished our clues and ran back to the finish line. We felt we did well, but we weren't thinking that we were fast enough to win.

Johnny and Kelly's teams took 5th and 6th, and Brian and Irene got 11th (the ping pong ball challenge did them in). 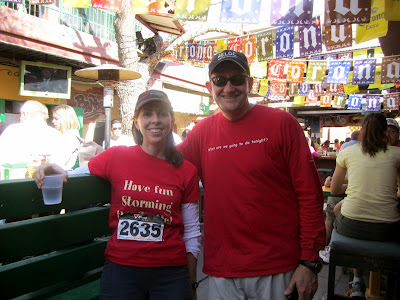 I say it every year, and I'll say it again: Scavenger Dash is super-fun! Great clues, with a nice mix of easy and difficult, the most fun challenges of all the races of this type and always a great atmosphere. If you haven't done one yet - do it! You can find their schedule for the rest of the year here: www.scavengerdash.com
Posted by Diamond Girl at 6:47 PM No comments: