I have a free night tonight. Well, not a whole free night, but a bunch of free hours in a row anyway. I got home from work at 4:30 and I don't have soccer until 9:00. I would really have liked to go to bed early since I've been up before 5:00 am two days in a row (flights to and from Albuquerque), but I don't want to miss soccer. I thought about a nap, but if I start that, there is no way I'll get up and go play.

So, with four consecutive hours of free time, I could have done so many things on my to-do list, such as: input all my receipts and payments into my Town Treks budget worksheet, read The Godfather for book club, read Home for the other book club, take the dogs for a much-needed walk or take myself for a much-needed run (CitySolve and Great Urban Race nationals are next weekend and the weekend after!) or even (gasp!) update my sadly neglected blog.

But no. None of that got accomplished. Why? Because I got on facebook and got stuck there ....for a really long time!! I did some cyberstalking of people, read lots of posts (my cousin is selling both Gopher football tickets and her house...anyone interested??), tried to interpret the vague ones (why exactly do suppose that Elizabeth's day did a 180?) and looked at pictures of my roommate's trip to the Grand Canyon and Elaine's baby.

And here's where the vanity part comes in. I checked out my own profile page, too. Cuz I'm vain. And cuz it's fun to read people's comments on my postings and my pictures. This is my current profile picture - taken last week while Travel Troupe was cruising the Caribbean: 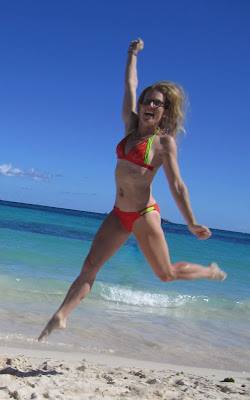 I am vainly proud of the comments that my facebook friends have posted. One comment: "You should take on a second career of doing fitness competitions. I think you could bring in some cash. Just don't tell them what you eat." Another: "Like a fitness model!" Awww...so nice. Keep 'em coming, people! I do love a good compliment. :) And with less than a year before I am no longer in my 30's (oh my god, how I hate getting old!!!), compliments on my looks are more pleasing than they were 10 years ago.

Someone also asked me if this picture was photoshopped. Come on! You don't believe that a 39 year old whose main (only?) food group is Tootsie Rolls and KitKats can take a decent photo? But I have to admit - that yes - I did edit it a bit...but only because that woman who is perfectly framed between my legs is a little off-putting. :) 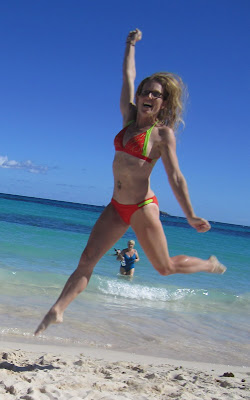 Ok then...vain girl checking out. I've got some sushi waiting for me and some Coyotes hockey to watch for an hour before I go play soccer.
Posted by Diamond Girl at 7:26 PM

I was laughing my ass off at the wonderful cheerful pic of your tan dogs but fortunately kept scrolling because now I am laughing even harder. You have an entire PERSON between your legs! I love it!!!! (oh, and by the way, you do look hot, per usual.)