We all went up to Pinetop over Labor Day weekend for an agility trial. 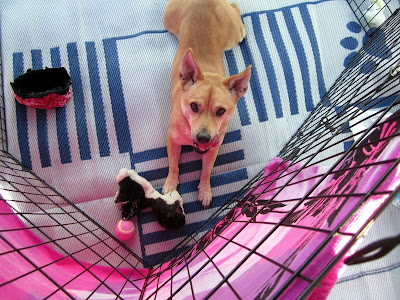 Georgie doesn't do agility. She got to hang out in the x-pen all day, whining and crying and being a pain in the ass. 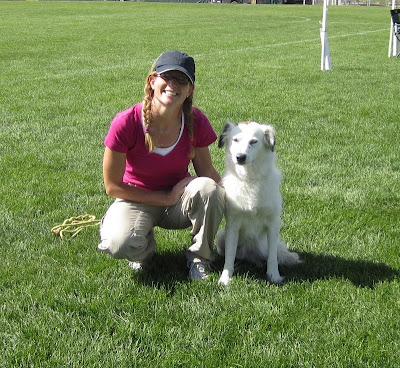 This trial was Mo's big debut! Our hopes were high! She'd been doing great at Jim's. Her confidence was up. We were doing full advanced courses, very slowly of course, but completing them! I thought she might be ready.

She didn't like it at all. She was nervous with all the people and all the activity. She acted as if she had NEVER seen a contact obstacle EVER before in her life. This is the furthest she went on any of the equipment: 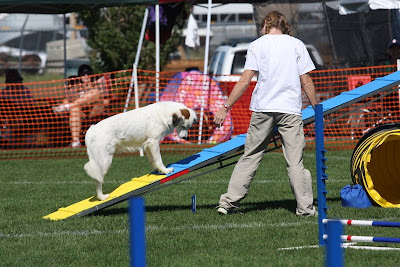 No amount of cheerleading, begging, pleading or fake-treating would get her to go another step. This picture actually shows her at her bravest. Most of the time she wouldn't even touch the obstacle. She did a whole lot of the standing still, staring into space and pretending she was invisible like she did when we very first started classes. She did do a few jumps and perhaps a tunnel in every run, but we didn't complete more than 6 obstacles in any run on the first day.

Nevertheless, she was a hit with the crowd. Everyone loved her! After her first run, when I finally gave up and took her over the end jump, the whole crowd cheered for her....which had the unintended effect of scaring the bejeezus out of her. She tucked her tail and tried to run. After that, everyone realized what a "special" dog Mo is. They were super nice and gave her lots of room, moved slowly when near her and took their time trying to befriend her. Though I did have the feeling that people were tsk-tsking me behind my back for starting her in trials before she was ready. I was tsk-tsking myself, too.

I was hopeful that the second day would be better for her. She'd be a little more accustomed to the surroundings and she'd realize that all I was asking her to do was the same things we've worked on over and over again at Jim's house. I knew she could do it, I just needed to convince her that she could do it.

Yeah...not so much. She still refused all contacts, she refused some jumps, even. I tried to keep a positive attitude - maybe she'd do well in jumpers, which was our last run of the day. No contacts or tunnels! Perfect.

Here is her final run:


She started out so great - I thought for sure she was going to get a Q. Then at jump 4 and 5, she realized there were people around! And they were moving! YIKES! How can she be expected to go over a jump when there are moving people around?!?! But, finally....she finished a course! About an hour over time, but she did the whole thing! It wasn't anywhere close to how she does in class, but she did it. 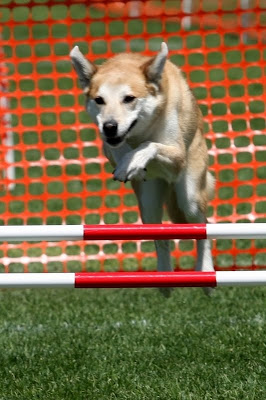 I also had high hopes for Frankie to do well at this trial. He, too, has been doing great at Jim's, doing perfectly in fact! He is now SIX years old and should be outgrowing his crack-baby ways. I thought for sure he would qualify in more than half of his runs.

Again, I was wrong.

We only got 1 Q out of 10 runs. It was very depressing. He got all cracked out on every run! People enjoyed his antics, but I didn't. I even tried having Pat run him once to see if that would get him to pay attention. It almost worked - he completed 3/4 of the obstacles - which was a record for the weekend, but he still lost it and went zooming around the ring for awhile.

Even when he's on crack, Frankie still excels at Jumpers. We always qualify. Except at this trial. Ergh. I must have been leading too far out because the jump I'm pointing at here: 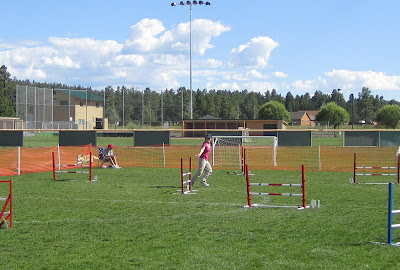 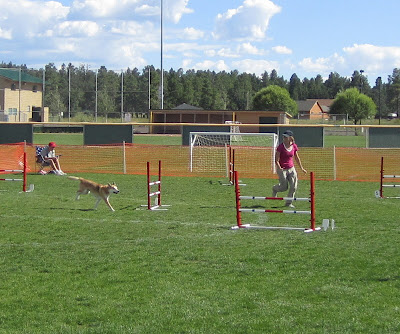 and he took the next jump instead: 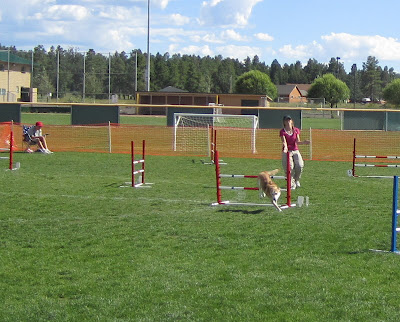 I have to admit that by the end of the trial, I was completely disheartened. I have put four years and thousands of dollars into Frankie - to no use. The dog definitely has a screw loose and I am a terrible handler.

Pat and I were supposed to stay Sunday night so we could hike and explore the area on Monday, but instead I insisted that we just load up and go home. I was too grumpy to stay. :(

Huh? We already went through My 3 Dogs. Who is Pablo??

My friend Vickie found a chihuahua puppy a few months back. No owner was located so she named him Pablo and let him stay. Pablo looks out of place with her pack of Aussies, 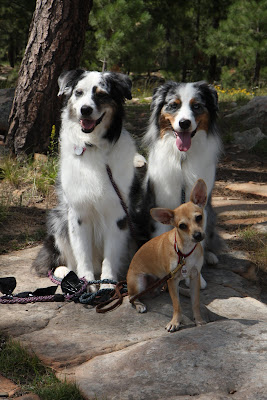 but he fits right in with my pack of tan dogs! They are like a little family of tan: 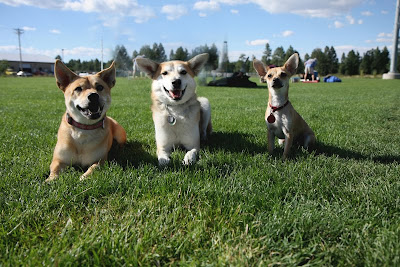 The first picture of Frankie going over the jump looks like the logo for the black jersey of your hometown Phoenix Coyotes.

I am soo proud of Mo for going out there and actually moving! She did great for her first time and her stage fright problems. Little frustrating about Frankie but hey crack is hard to break.