The first of the latest flurry of fosters was Precious. 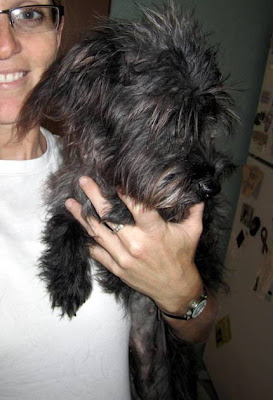 Her owners thought she was so precious that they bred her, kept (sold) the babies and turned her into the shelter because they didn't want her anymore. Yet, they named her "Precious". People suck.

She came to foster because she had mastitis and needed some meds. My NFBF was going out of town for a week so Christy told the girls that they could have a dog for the week. They took care of Precious for most of the time so I don't have many pictures. She was A LOT cuter than the pictures show. 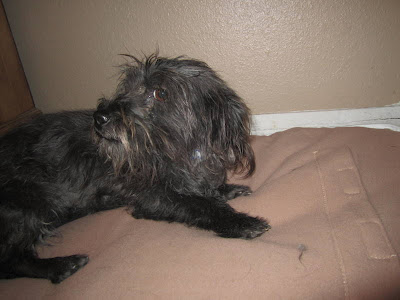 She looked like a tiny Scottie mix. See how little she was: 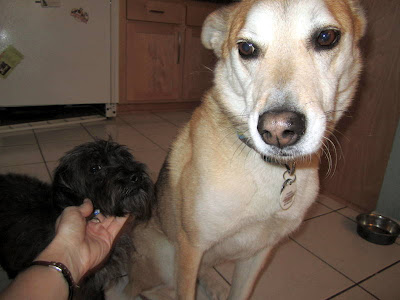 She got along great with my dogs. She was a bit nippy with the kids, especially if they tried to stop her from doing something she wanted to do, like eat the kittens' food. Despite this, she got adopted quickly. Yay!

The next of the furry fosters was the fuzzball we called Football. 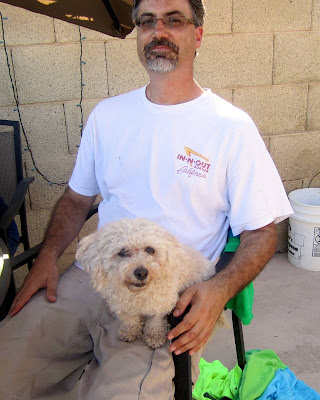 Her real name was Pelusa, but she was the shape and size of a football, so "Football" stuck. Whenever we called her that she'd wiggle all over. Cute! Football was an 8-year-old Maltese mix. She was pregnant with two pups. The first was stillborn and the second she couldn't get out. The Humane Society did surgery to get the other dead puppy out. Poor Football.

This trauma didn't affect her lovely personality at all though. She was awesome! Calm and affectionate, completely housebroken and not destructive, great with the other dogs, ignored the cat, LOVED the kids. 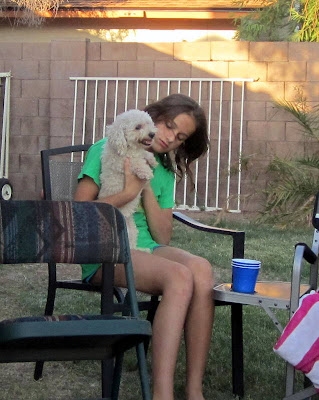 She was a matted mess when I got her, so she received lots of grooming here. She didn't complain about any of it, even though some of those snarls had to hurt pretty bad! She didn't even complain about having her nails trimmed. What a good girl she was!

After I turned her back in to the shelter, it took 4-5 days before she went up for adoption. They had to do a dental on her because her teeth were pretty rotten. I felt so bad that she had to be at the shelter for that long . :( She really is a family dog and a house dog who likes a comfortable bed and companionship.

I was worried about her getting adopted because she was so old. When she did go up for adoption, her info card said that it was required for her to meet any children before going home. Based on info I submitted on her, her card should have read "Friendly - men, women, children." I kind of freaked out. Requiring to meet kids implies that the dog is not good with kids. Pelusa loved the kids! She let all of them carry her around like a doll and she sat on their laps all day. I called the shelter and asked them to change it. They said that usually with small dogs they put the child intro requirement because they have a tendency to be nippy. This is fine and good for some dogs, like Precious, for example, but Pelusa needed as much help appealing to adopters as she could get. "Friendly-children" is definitely appealing!

I have to admit that I was kind of a bitch about it to the shelter girl. It seems like lately they have been ignoring the temperament assessments that we are required to turn in when we turn in the dog. Fosters are with the dog for weeks or months so they should know their temperament, but I feel like the info goes unread sometimes. So, I complained. And I felt bad about being a jerk. I was just so worried that Football might be overlooked because potential adopters thought she didn't like kids. Then, she got adopted that same day. Oops - now I really feel like a jerk!! :) I promise to be nicer in the future! 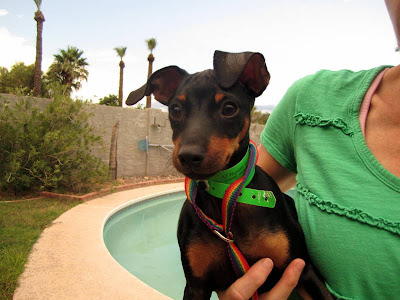 It's unfortunate that min pins are crazy gung-ho daredevils and yet have tiny, thin, little bones. So breakable! Here he is in his cute cast: 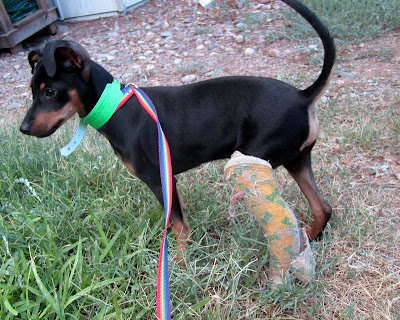 Ridley is only 15 weeks old. He does NOT like cage rest. He is the most hyper puppy I have ever fostered. He wants to run and play 24 hours a day. He's a ball of energy. Poor kid!

When I'm home, I keep him in an x-pen with lots of toys. He'll scurry from one toy to the next playing his heart out. Then he crawls under the bed. And over the bed. Then under the bed. 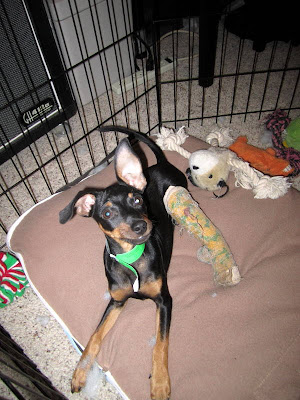 You'd think he'd wear himself out eventually, but he doesn't. He goes CRAZY when the dogs are around and they start playing or when I throw the ball for Frankie. He wants so badly to join in the fun. :(

I take him back to the shelter on Friday for a splint change and a x-ray. Unless he's a super-healer, he'll be on cage rest for 2 more weeks after that. Poor little guy.
Posted by Diamond Girl at 7:00 PM