Ridley, the min pin with the broken leg, went back to the shelter a while ago. He was a lot to deal with (so much energy!) so we gave ourselves a foster break for a few weeks. I thought Ridley would get adopted quickly since he was little, cute and young. But he didn't. He sat in the shelter for more than two weeks, breaking my heart every day when I checked the website and saw that he was still listed as available. Poor little playful guy. But, eventually, he got adopted and I'm sure he's driving someone else crazy right now. I hope they are enjoying his goofiness!

After our foster break and our trip to NYC, I called in to get another foster. This one is a chihuahua/boston terrier mix. He's one year old and...big surprise...just like all the fosters lately, he's got a broken leg. Broken legs must be contagious!

He started out with a blue cast. 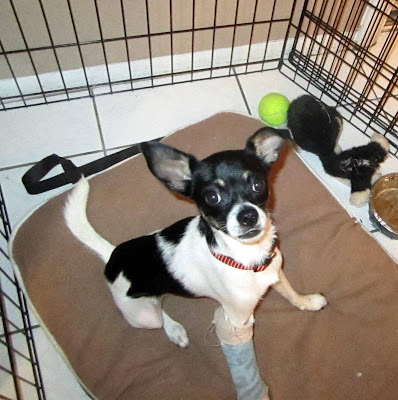 I named him Corky because he's got this really cute corkscrew tail: 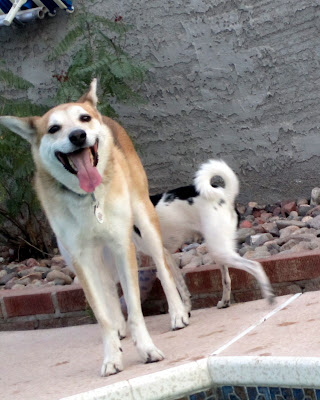 Really creative name, I know. I'm running out of foster names so I'm going with the first thing that comes to mind.

After two weeks, Corky went in for a splint change and an x-ray to see how the leg was doing. My past few broken-leg fosters didn't have to get a new splint after their first visit because their little bones healed quickly. No such luck for Corky. His little bone is healing slowly. He got a shiny new yellow cast and was sent back for another two weeks. 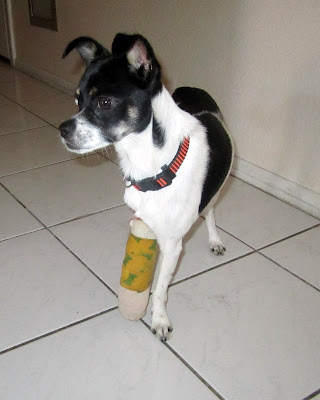 Corky loves the dogs. He wants to play with them all the time. He likes to jump on them. Once he successfully landed on Frankie's back. Frankie just stood there and Corky gave me a look of surprise before he fell off. It was pretty funny. I thought about changing his name to Jockey.

He loves to play with toys, too. He'd probably like to play tug-of-war but Georgie is not much for co-play. This little green frog toy is one of Corky's favorites. Georgie enjoys guarding her toys and letting Corky know who's boss. This makes Corky want the toy even more! 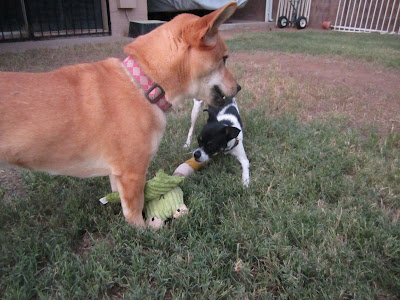 He's thinking that if he pretends he doesn't want it, then maybe he can sneak it away from her. 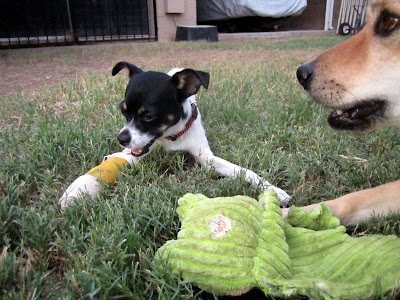 No such luck. Georgie never falls for that trick and wins the battle for the toy every time. 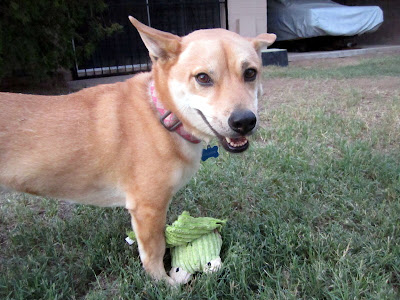 And then she goes and buries it.

Corky's yellow cast didn't fit as well as the blue cast and he started biting at it and licking his leg. He gave himself quite a hotspot. It started to get infected and smelly. Ew. I put a cone of shame on him and moved up his hospital appointment so they could treat the owie. The x-ray showed that the broken leg still wasn't healed so he was sent back in a purple (and bigger!) cast for another week. The cone of shame stayed on: 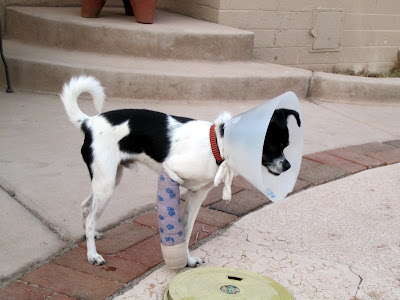 On Thursday, Corky went back to the AHS for another x-ray. And the leg still wassn't healed. He got another splint, white this time. I have not pictures of the white cast because Corky someone managed to get it to slide off his leg on Thursday night. He's back at the shelter now getting yet another splint. I wonder what color it will be?
Posted by Diamond Girl at 8:13 PM