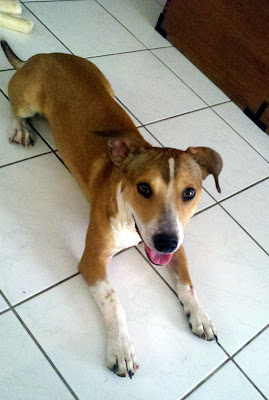 Jake is already up for adoption at the Humane Society! Here is his foster story.
After a short break from fostering (I needed some sleep; Quinn was a VERY early riser), I called the Humane Society to see what they had for available for foster, preferably something along the lines of mange or tick fever or infected uterus in size small, please. Anything that doesn't require cage rest. They didn't have anything small. Bummer. However, a few days later they called and asked if I could take a beagle mix with mange. Mange! Yay!

When I got there to pick up the dog, they inquired about my request for small dogs. I explained that Mo is a Nervous Nelly who doesn't particularly enjoy other dogs though she seems to do okay with smaller dogs. The foster lady looked a little nervous and told me that the mangy beagle mix was actually 40 pounds. 40 pounds is not small! But I was there and a mangy beagle mix needed some foster care so I said okay. Mo would just have to deal.  And so they brought out Jake...who is exactly the same size as Georgie! Georgie, who is 29 pounds!  No problem!

Seriously, Jake and Georgie are exactly the same size: 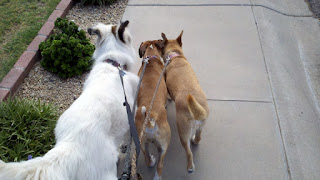 I think he is more basset mix which would account for his low-slung heavy stature.

Jake was originally fostered for two months by a different foster home while he recovered from a bad leg injury. His leg was torn open all the way to the bone. It was so bad they couldn't suture it closed so they let it scar over while wrapped up. The scar is about an inch wide down the whole length of his leg.  I don't have any pictures of it. He is also covered with scars all over his face. You can see a few of them in this picture, though there are a few more that you can't see. 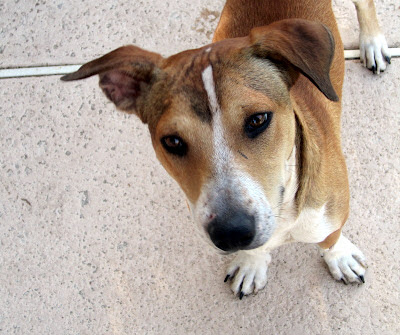 Who knows what happened to this boy in his prior days, but I can tell you that it hasn't at all affected his temperament. The day I brought him home, he allowed me to trim all his nails and clean his ears, and he lay still for about 45 minutes while I manipulated him in all sorts of configurations to thoroughly de-tick him. He was amazing! After his leg healed, the poor guy was diagnosed with mange. The original foster couldn't keep him any longer which is why I got the call.

He got along with Georgie, immediately asking her to play. As Frankie got used to him, they would wrestle and play chase frequently. For the most part Jake respected Mo's request for distance, though every once in a while he tried to be more friendly than she wanted.

Jake LOVED toys! He especially loved to run around the yard with a toy in his mouth. He would demolish stuffed animals in minutes. I went to Goodwill and bought a bunch of $1 stuffed animals to keep him happy. 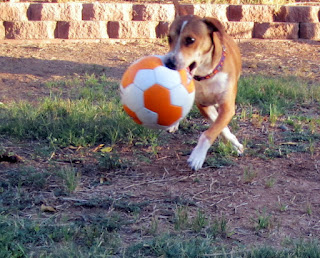 Isn't this cute? This is the picture they put on his kennel card and online: 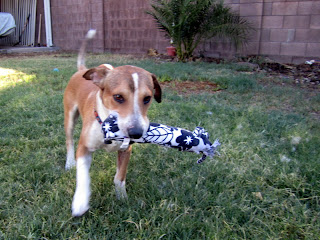 Although Jake came to me housetrained, he had never been taught to sit. Teaching him to sit was an arduous task. He really liked his food so I thought he would be easily trained. Wrong! The problem was that Jake was TOO easy-going. I would hand-feed him his entire meal piece by piece, breakfast and dinner - each time giving the command to sit, showing him the correct position and then giving him the kibble. You think eventually he would understand. But no...his thought process was more along the lines of "this crazy lady sure likes to maneuver me around. Okay, I don't mind. I'll let her do whatever she wants. I can wait til she decides to give me the next morsel."  It took him probably about 325 repetitions before he finally realized that he was supposed to be playing a part in this game. When he did eventually connect the dots, he had a solid sit. I never did get a chance to start on down. 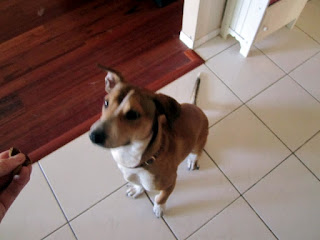 He really was an awesome dog. He walked perfectly on a leash. He was housetrained. He was super-duper cuddly. If you were watching a movie or taking a nap, he would happily snuggle up with you for the duration, happy as a clam! He was super-silly, always doing things that made us laugh. Once he tried to jump, with all 4 feet, into my lap while I was sitting on a high barstool. He failed. :) With all the wonderful things about him, there always has to be a catch, right?

The catch was that, like Quinn, Jake was an early riser. As all my fosters do, he slept in a crate in the dogs' room. He would wake up and start barking at 5:00-5:30 every day and loudly protest being in the crate until I came to get him. Ugh, I needed sleep!  They had told me at the shelter that he was a chewer, and though he tore through toys really quickly, he hadn't even attempted to chew anything he wasn't given for that purpose. So, to see if he'd sleep longer, I decided to test him sleeping loose in the room with Frankie and Georgie. It worked like a charm the first night. He slept on the couch and didn't wake up until I woke them up. Yay!

But the second night, he woke up early again. He barked once or twice but then was quiet so I went back to sleep. You should always be suspicious of quiet dogs! Jake was being quiet because he was happily chewing the stuffing out of the couch! The couch is a "dog couch" so this was no tragedy. 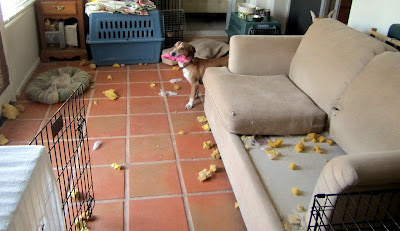 So, back to the crate for Jake. Back to really early rising for me. I hypothesize that if he was allowed to sleep in the bed with us, he would have slept as long as we wanted him to. Pat is out of town this week so I was going to test that hypothesis. However, when I took him to his vet appointment (Jake, not Pat) on Saturday, they surprised me with the news that his skin scrape was clear and he could be put up for adoption immediately. I was supposed to have him for 4 more weeks! I hadn't taught him down yet. I hadn't taken any video of him yet. I hadn't even filled out his adoption information paperwork!  My intention was to create an adoption video to try to help him get adopted. He's so ordinary looking that I'm afraid he'll get overlooked in the shelter. He's adorable, but he looks like 50 other of the 100+ dogs there.

It's a good thing that he got to go up for adoption sooner than planned so he can hopefully find a home sooner than planned, but I'm still worried about him. He has been up for adoption already for 5 days. It makes me sad to think of all these days that are going by that he doesn't get to snuggle with someone. :(   Please, someone out there, please go adopt my boy. You won't regret it!

Until he is adopted, this link to his adoption profile will be active: http://www.petharbor.com/pet.asp?uaid=AZHS.A395247

Oh, he's darling! So glad he was well fostered before adoption. :)