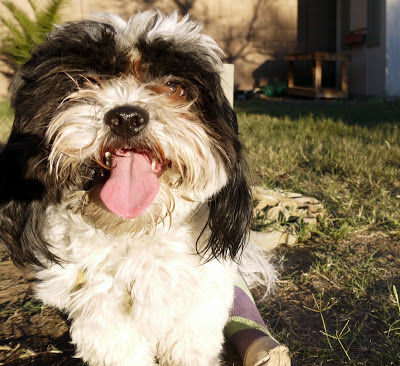 Meet Barney, my latest foster. Barney is a recovering from a broken leg via a splint and cage rest. He is a two year old Lhasa Apso. Or maybe a Shih Tzu. Who knows? The shelter says lhasa, I say shih tzu. I did a google search on the difference between a lhasa apso and a shih tzu and the best I can tell is that shih tzus wear there top hair in a pony tail and lhasas don't. Since this little dude came in as a stray, there was no one to be styling his hair so that differentiation is lost on him. No matter what his breed, he is a cute little sweetie.

His cast is so big. His leg sticks out in front of him when he sits. 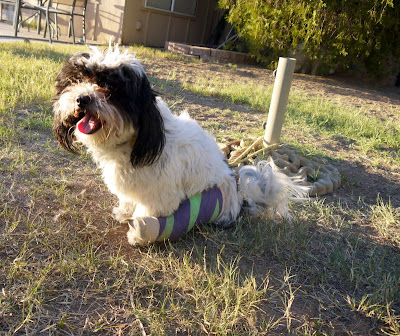 His leg sticks out to the side when he sleeps. That can't be comfortable, can it? 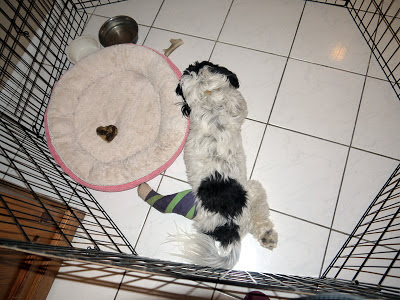 Barney has a few favorites things, such as my dogs, getting the zoomies and chewing bully sticks. I hope a big alarm sounded when you read "zoomies". He's supposed to be on cage rest, remember? Zoomies are strictly NOT allowed. Well, this morning I was in a huge hurry and it takes me forever to find the collar ring under all that hair so I didn't put a leash on him to go potty outside. I figured he would pee real quick and then I'd pick him and take him inside, just like every other morning for the past 3 weeks. I underestimated Barney's intelligence! He knew he wasn't on a leash and he knew that means I had no control of him. I put him down on the ground and SHAZAM! He was off. He was zipping around like a dog on fire, huge grin on his face. He wouldn't come near me at all. It was a huge game of keep away...the funnest game a dog has ever invented, according to the dog. Not so fun for the human! Especially when that human is in charge of CAGE REST! I take some solace in the fact that he did his zoomies all on 3 legs and didn't put any weight on the broken leg. Finally I gave up and went inside and he followed me so he wouldn't be left outside alone.

Barney does not like to be alone. He wants to be with you and be a part of the family. When he's in his x-pen in the dining room, he will go crazy with the barking if I leave the room, even to just grab something from my bedroom. At night, I put him in a crate in the dogs' room. He's not alone, right? He's got Frankie, Georgie and Mo with him. Yeah, try telling him that. He'll go to sleep for a little bit, but he will wake up in the middle of the night barking. And barking. And barking. I try to let him bark himself out, like a normal dog would do, but no. He doesn't give up. After an hour and 40 minutes (not exaggerating), I would give in. I couldn't take it longer than that. Finally, I gave in altogether and now he just sleeps in my room from the get-go....and not a peep all night. As long as he is with the people, he is a happy and QUIET little dog.

His ideal life would to be with us and with the dogs, too. He LOVES the dogs. He wants so badly to play with them. He tries to wrestle with Georgie and he play bows Frankie into a game of chase that he can't follow through on because I've got him on a leash. Poor little guy. I am looking forward to him being cleared for activity, because Frankie will be so happy to have someone to play with.  Georgie has turned into a lazy-butt recently and doesn't play with him as often and he is sad. Barney will be good for him, hopefully soon!  Though when he's cleared for activity, he will go back to the shelter shortly after that to go find himself a forever home. Hopefully that home has dogs!

And each week they’ll benefit from 9+ reload bonus offers nicely as|in addition to} hundreds of free MySlots rewards factors. Bovada has designed its website to be compatible with a number of|numerous|a variety of} mobile units. However, we have been disenchanted to learn that the app just isn't 블랙잭 out there in all US states.

As the gauge quantity increases, the material thickness decreases. Direct Metals Company, LLC is a leader within the industrial metallic and fiberglass merchandise trade. If you need quick, reliable transport of some of the the} most respected manufacturers of industrial metallic and fiberglass merchandise, you need Direct Metals. You Shower Slippers with Holes can select from broad selection|a extensive array|a big selection} of perforated metallic, wire mesh, bar grating, expanded metallic, security grating, fiberglass grating and architectural metallic merchandise. Plain metallic sheets of architectural high quality differ in thickness between .025″ (.60 mm) and .124″ .