An echo comes and goes pretty quickly. You shout out something....the echo is there...and then it's gone, just like that!

I shouted out "Hey, I need a new foster dog!" Thus, I got Echo, and then she was gone, just like that. This is (was) Echo. 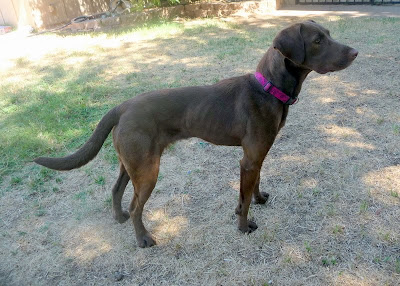 She is (was) a Chesapeake Bay Retriever. She was turned into the Humane Society because her owners were ill. She came in with a brother. Both of them were pretty skittish and scared of the shelter, but her brother got over his fear pretty quickly and was immediately adopted. Hurray, Brother!

Echo, however, did not get over her fear of the shelter. She was terrified, shaking, jumping at every little sound and every movement. 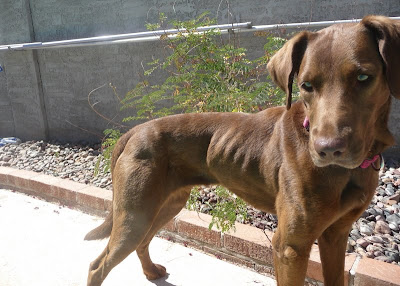 They were worried that she might not be adoptable, so I took her home to assess her real personality. It was obvious as soon as we got to my house that she was a good, sweet adoptable dog. She was immediately friendly with my dogs, she was timid but friendly with all the humans, she let me brush her and even at her first meal with us she maintained her trained behavior of waiting until released to eat her food. Yay! I didn't have to train this one! 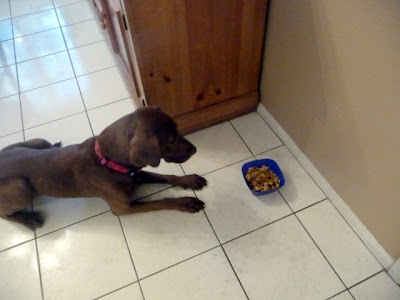 Despite her manners and her sweetness, she was still nervous and she paced non-stop for the first two days because she was so nervous. After those first two days she finally began to relax.

Except "relaxing" for Echo doesn't really mean relaxing. It means letting her true self shine. The true self that thinks that naps are stupid. Computer time is stupid. Reading is stupid. The only not stupid things are walking the dogs, playing with the dogs and most not-stupid of all, petting Echo.

If I tried to take a nap, I got this: 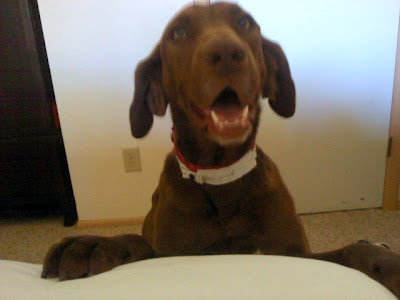 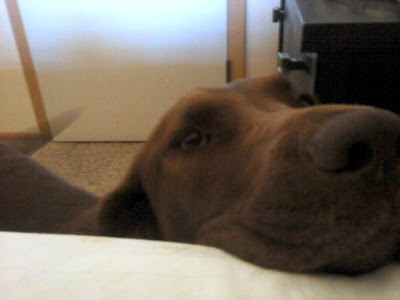 Well, maybe you could just pet me? C'mon!! Pet me!!!
It took a whole lot of ignoring her insistent nudges before we'd finally get this: 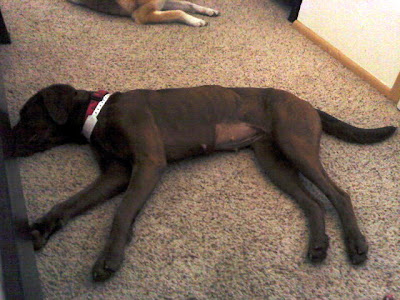 Echo has a lot of energy. She loved playing at the dog park. When I took her running, she never got tired. (I like how that makes it sound like I go running a lot. Hee.)

Echo went back to the shelter for her second set of shots 10 days after I got her. Though she was still terrified there, the foster folks agreed that she would be okay to go up for adoption and that I'd keep her at my house for the duration. I sent pictures and a description that day and they put her on the website. There were 2 interested calls right away, plus 2 interested people at my work.

She was adopted by the first people who met her. :) Gone quickly like a good little Echo. She will make her people very happy. 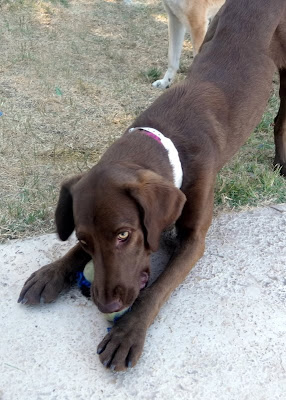 As for Frankie, Georgie, Mo and I, we are all happy that we get to nap in peace again!
Posted by Diamond Girl at 6:55 PM

Love this dog! Sad I didn't get to meet her :( Good she got a home fast! Honey is gone from the site I am assuming that means she is adopted out! YAY for fosters getting adopted!