December 18th was the second annual Reindeer Run 5K. Why do you suppose I entered a 5K? Well, I hope you know by now that it wasn't for the running! It was, of course, for the costume contest!

This year's costume was a concept that was both auditory and visual. 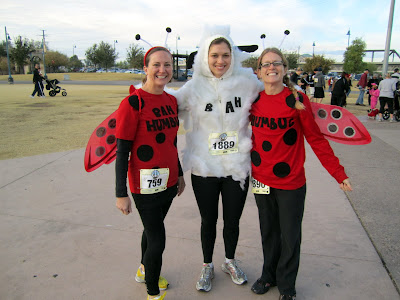 The sheep says "Baaaaah". The bugs say "Hummmmm". Together we are Bah Humbugs. 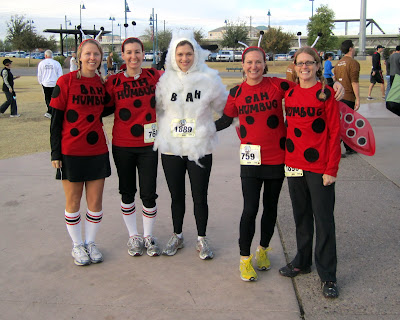 It took most people a while to understand what we were, but you knew when they got it because they would start chuckling. A lot of people thought Marin was a Christmas sheep. I don't recall the story of the Christmas sheep.

Bad news first. The race started out with the running. Ugh. Bugs and sheep running: 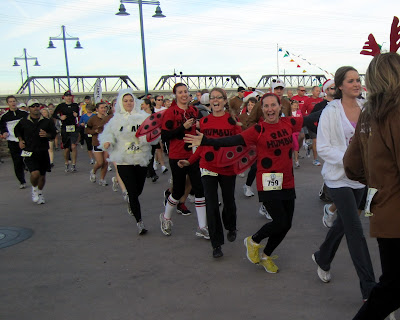 Marin, our awesome sheep friend, ignored the warning signs of heat distress and wore her costume for the whole run. What a dedicated costume-r!

Good news second. We won the costume contest (of course!). The emcee did not understand what our costume was at all. At the start, they had everyone competing write down their costume name. When it was our turn to parade across the stage, he introduced us as the Bah Humbugs, but he still didn't get it. I took the mic from him and Marin gave a wonderful "baaaah" which the rest of us followed with a melodic "hummmmm". As we walked across the stage area, he said "OH! I get it now!!" He gave us extra credit for the auditory portion. Despite the fierce competition from a fake-boobed, sexy Grinch in a tiny little green dress with two little Who-Children and a running stroller modified into an impressive sleigh, the Bah Humbugs took the prize...cuz we are awesome. 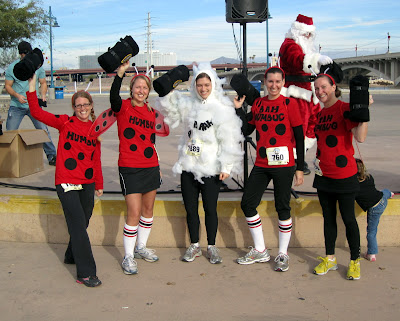 In case you haven't seen enough of the costumes yet, here we are with Santa (and Kristen's daughter, Ila): 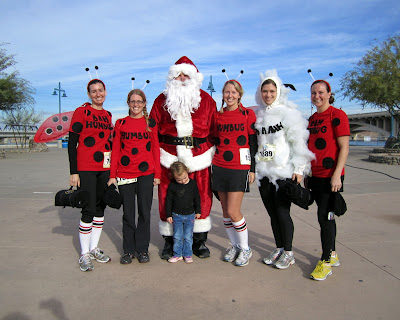