So, it’s once again time to scour the racks at your favorite used clothing retailer for the fugly holiday knitware that it sure to be hiding amongst the mismatched dishware and broken kids toys. In an exciting twist this year, we are also encouraging guests to take it one step further and add themes or costumes to your holiday attire. ‘80s Christmas? Done! Homemade Uncle Scrooge outfit? Yes, please! But whatever you do, you better look like a huge holiday goofball because non-dresser-uppers will be mercilessly ridiculed, tarred, and feathered! Also as in years past, a Grand Prize will be awarded to the winner (it’s more of a loser though, right?).

Marin and her husband were Santa and his elf. She is the cutest elf ever! 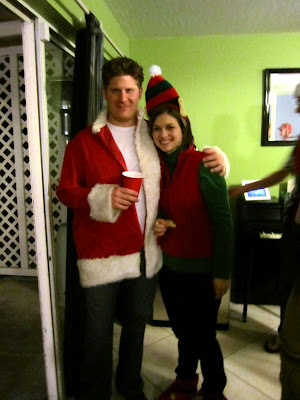 Pat wanted to beat his 2nd Place finish last year, so he spent even more time making his sweater this year. I think he forgot the "Ugly" and made his sweater too cute: 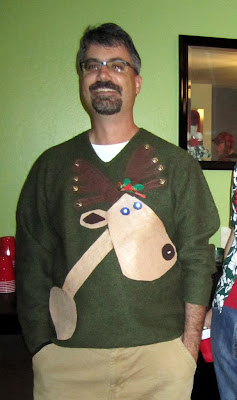 While it may look like a simple design made with felt and a glue gun, it actually took quite a bit of work to make it. That's because he spent hours soddering and wiring the eyes and nose of his reindeer. He even made a schematic with the boys at work to make sure it was done right. He's such an engineer. :) The eyes could be red, blue, green or purple and could flash in varying stages of colors. The nose flashed red. I took about 100 pictures but could not get one while the nose was glowing.

I chose to go with a holiday theme costume. My original idea was to go as a snowflake, but the creativity part of the making of the costume completely overwhelmed me, so I took the easy way out and became a snowman instead: 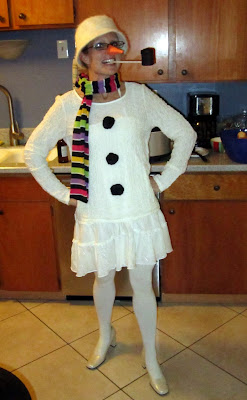 A hot glue gun is a pretty handy tool. I used it to put on the buttons, make the pipe and make my carrot nose. I actually glued the orange felt to an old pair of glasses. Worked perfect! 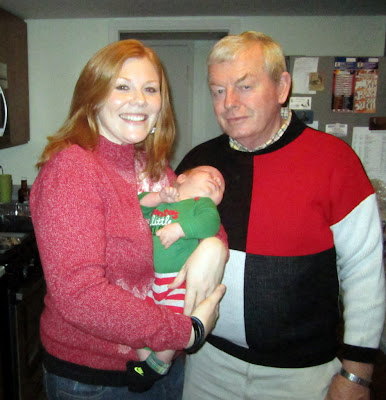 After coming in 3rd Place last year, Emily upped the ante went with an "ensemble": 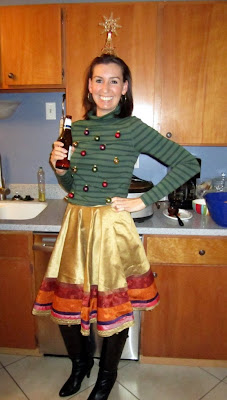 That is her actual tree skirt that she is wearing as a skirt. And those shiny balls are her actual Christmas tree decorations. Awesome.

Last year, a girl named Sarah won the contest. This year she was too scared of the competitiveness of Emily and Pat, and thus didn't even try to top her outfit last year. I think she just had on a red shirt and jeans. When the voting was tallied, the costumes and ensembles topped the Ugly Sweaters. Emily and I tied for 1st Place! Pat came in 2nd. 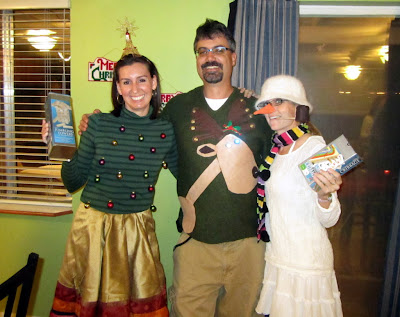 And Jamie, though wearing what really was the ugliest sweater at the party, didn't even get an honorable mention. You just can't compete with a Snowman, a Christmas Tree and a sweater with wires and battery packs! 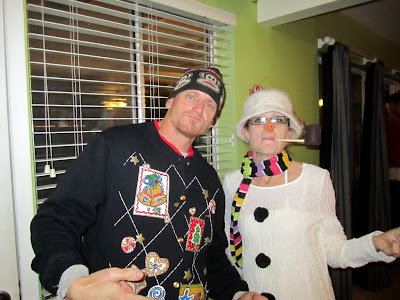 So festive and creative! I think I would actually wear Pat's sweater. Perhaps he should mass market?