On Saturday, I had an agility trial in Tempe with Frankie and Mo. We camp out with our friend Sheryl at trials. She has all the amenities you could ask for...tent, walls, heater. By the end of the day, even this fabulous set up wasn't enough to battle the wet and cold. 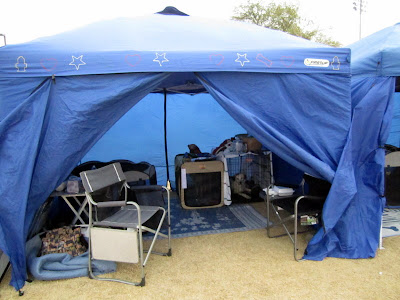 The day started out okay, there was an absolutely beautiful sunrise, and we thought perhaps we might get lucky and have the rain pass us by. 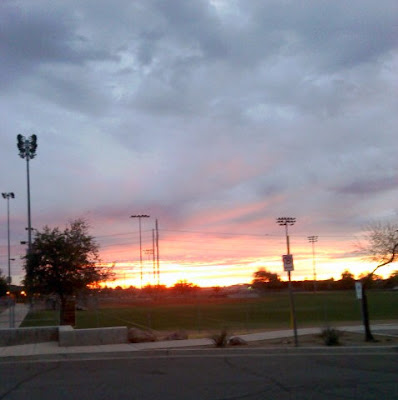 However, later that morning it started to get windy. Really windy. There was so much dust flying around you couldn't even see across the ring. 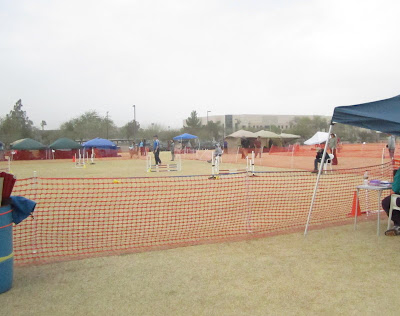 Mo did all her runs in the early morning, so she was done before the wind picked up. This is a good thing because she can't even make time under perfect conditions, if she had to deal with wind or rain, it would take her an hour to finish a course! I thought maybe we'd get a Q this time - she ran (okay...jogged. Oh, okay...walked quickly) through her whole jumpers run. Still, despite all the extra time she is allowed as a veteran and physically challenged dog, she was still over by 3.5 seconds. Slo-Mo, for sure! On her gamblers run, she did an A-frame for me. I was so happy!! This is the first time in a trial that she has even willingly touched a contact! To get a Q she needed 15 points in the first 30 seconds. The course could not have been set up any better for her. A jump (1), an A-frame (5!), the tunnel under the A-frame two times (3 x 2) and then a jump (1). BUZZ! Ergh! Only 13 points were accumulated. I don't think she'll ever get a Q!

Frankie did pretty well, for Frankie. He Q'd 3 out of 5 runs - gamblers and 2 jumpers. I thought he Q'd on one of his standard runs but he was over time. Yes, he spazzed out a bit and wasted time running around like a crack-dog, but I got him back before he went off course.

When we were waiting for our first standard run, a tarp from someone's set-up got stolen by the wind. Frankie and I were right in the path of the flying tarp. Like an idiot, I just stood there watching a full-size blue plastic tarp coming right at us. It was about 3 feet off the ground and as it passed over Frankie's head, he spooked (wouldn't you?!) and simultaneously cowered down and jumped to the left. When he took his next few steps, he was very limpy-limpy and when he was standing he wouldn't put much weight on his back right foot. I decided to let him run to see how it went. He felt no pain (crack-dog, remember) out on the course, so I guess he's ok. He hasn't been limping since but I'll keep an eye on him. I can't really afford another vet visit - we already spent over $300 on him this week!

Soon I will get to the point about getting wet and cold, like the post title alludes to, but I'm gonna digress to the vet visit first. Last week Frankie started being an over-urinator. Seriously, he would pee every hour and pee for a long time each time. On Thursday night I counted 41 seconds of continuous pee. That's insane! Especially when he had peed every hour for the last 5 hours! He went through the same thing last year around this time and the vet found nothing wrong with him then. Now the problem is back so I took him to a different vet. Yet another digression: Frankie hated everyone at the vet! The receptionist, the tech and the vet were all greeted with growls. We put a muzzle on him for the exam! Wtf? When did he become such an asshole? Anyway, they tested his pee and did a blood test. He has a slight urinary infection most likely caused by the over-peeing as opposed to being the cause of the over-peeing. The blood test came up with nothing. Ergh. $312 and no answers.

After all of Mo's runs and half of Frankie's runs, Saturday's weather turned crazy! Full wind and full rain. Tents were flying away. They had to stop entering scores in the computer because the scorekeeper's tent was one of the ones that blew away and broke. Some of the bigger dogs were getting blown off the dog walk. (Scary!) I moved Frankie and Mo into the car because the walls of Sheryl's set-up were no longer keeping the rain out. The floor was a huge puddle. And yet...people stayed! Why? Cuz dog people are crazy! I guess I'm a crazy dog person, too, cuz I stayed. Frankie ran both his jumpers courses in the pouring rain. He didn't care at all. He loves jumpers and no stinkin' wind or rain are going to stop him! Finally the trial organizers decided to cancel the final class and give vouchers for a free run at an upcoming trial to all of us crazy, wet, cold people who stayed. Me and my crazy friends, soaking wet and freezing cold: 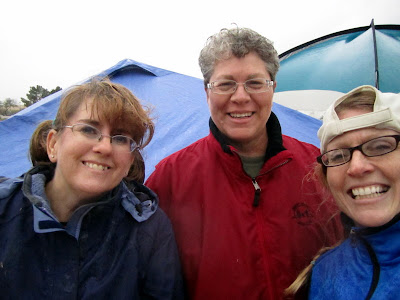 On Sunday was the PetSmart Charities PetWalk. It was a 5K walk and contests. I love contests! I dressed Frankie and Georgie for the costume contest. I didn't think we'd win because their costumes are cheesy ones bought at Target, but I love a contest. I was holding on to hopes for winning Best Trick (Frankie...are you a boy or a girl?) and the Fastest Pet/Pet Parent sprint with Georgie. I was very excited about her short legs beating everyone else! I brought Miranda with us so she could win Most Unique Participant with either Sammy, the ferret or Sophie, the rat. Well, we thought she was going to win until we saw a lady with two goats and another lady with a pig in a stroller! 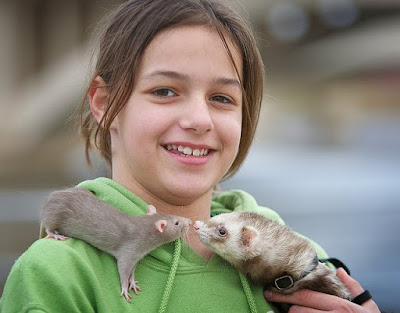 At 9:00 am, it was almost clear out. Not sunny, but not raining and it looked like maybe we'd finished with the rain the day before. The costume contest was before the walk. Frankie was a bumble bee and Georgie was a banana split. 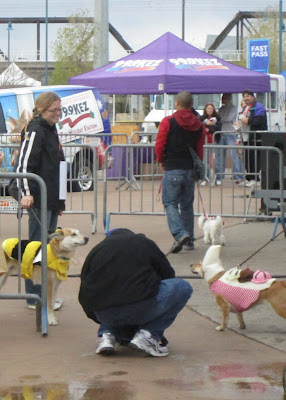 Not surprisingly, we did not win. No big deal. The real contests were at noon! The Walk had tons of vendors and activities and 150 shelter dogs up for adoption. It was supposed to go from 9am - 2:30 pm. We checked out a couple vendors before the walk, but saved the activities (agility course, a fetch area, paw-print painting) and most of the other vendors to keep us occupied between the walk and the contests.

We started the walk at 10:00 am. Still not raining, not too windy, just a little chilly. I kept the dogs' costumes on to keep them warm. 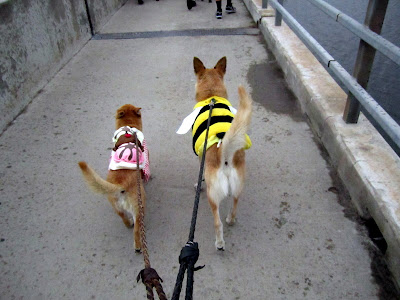 The first two miles were fine. Then, it started raining. Then, the wind picked up as we turned the corner for the last mile. Ugh! It was raining hard! And it was cold!! The wind and rain were blowing right into our faces. We were a mile away from the park and 1.5 miles from the car. We had no choice but to keep walking. It was miserable! Cold and wet and wet and cold. I was wondering if I could win a sprint contest with soaking wet jeans on. Miranda, a girl after my own heart, commented during the worst of the rain, "Maybe it's raining too hard for the pig and the goats and I'll win the contest." I was kind of sad though because I didn't want to win any contest by default!

As the last mile progressed (very slowly), my hands turned into icicles. And Pat turned into The Grinch. He hates being wet. He didn't stop when we got back to the park but kept walking right to the car. Miranda and I stopped to ask if the contests were still going to happen or if they were canceled. Nothing had been canceled, but there was no way Pat was going to stick around for 40 minutes, so we sadly left the event and went to the car. We were soaked all the way through, we were frozen solid. The poor ferret was shivering like crazy and Frankie and Georgie fell asleep immediately on the floor of the car, curled up together for warmth , so it was probably best that we left. But still....I wish I would have stayed. I wanted to do the contests!

I was so sad for the organizers of the event, all the vendors and the rescues with the adoptable dogs. They all lugged all their crap out there, they planned for months, they put up 150 temporary chainlink runs for the adoptathon...so much work and it was ruined by the rain and cold. The adoption event wasn't even scheduled to start until after the walk, so I don't know if they adopted out any dogs. Heart-breaking. I still can't think about the event without getting completely depressed about it. All that work and all their high hopes dashed. Ugh.

Wet and cold. Yuck! Phoenix, I love you for your heat and sun. Could you please stop being like the rest of the country and get back to what you are good at? HEAT AND SUN, PLEASE!!
Posted by Diamond Girl at 9:08 PM