As you may recall, a dumb Mama Cat had her babies behind my shed, causing extreme insanity in my dogs. I am not exaggerating the insanity. It really was extreme! Seriously, the dogs could think of nothing else other than kitties, kitties, kitties. This is how they spent ALL of their outside time: 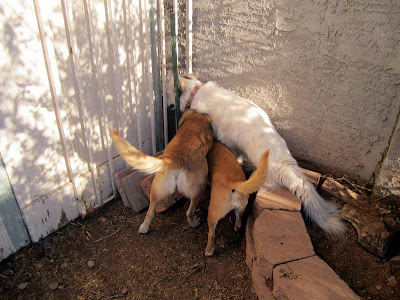 Mama Cat is quite feral. I think Daddy Cat used to be someone's, as he will let you come near him, but Mama runs as soon as she sees people. I don't want the kittens to be feral so every once in a while (when I had the energy to move all the barriers) I would take the kitties out to play with them and get them acclimated to people.

This was on May 1st: 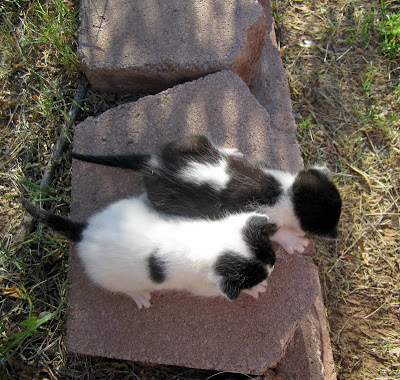 I haven't named them yet, other than Black Kitty and White Kitty. Black Kitty: 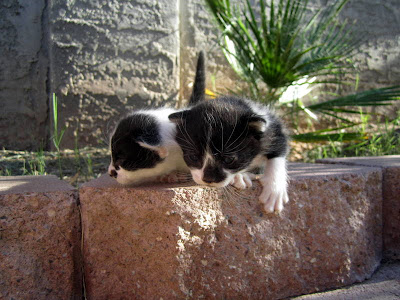 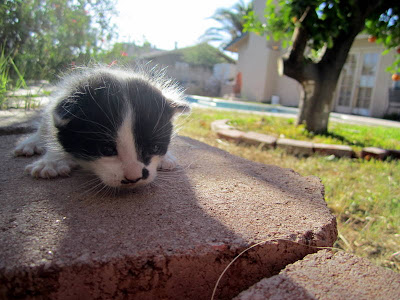 One day, Mama Cat got tired of us playing with her kittens and she moved them. The nerve! I looked all over for them...in our yard, the 2 neighbor yards and the Montessori school yard that shares our alley. I scaled the school fence and sat on the roof of the school where the cats like to hang out, and I watched for about 30 minutes. I saw Mama Cat, Daddy Cat (who are both black and white like the kittens) and Uncle Tabby going about their neighborhood business, but I couldn't find the kittens. In their absence, the dogs went back to normal...playing, going potty without being ordered to, wanting attention from me. It was nice.

A few days later, on May 6th, the dogs found the kittens. Mama Cat had moved them back into my yard! This time she wasn't quite as dumb. She put them in the pool pump house where they were completely safe from doggie teeth. 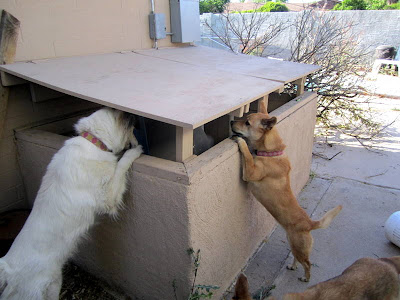 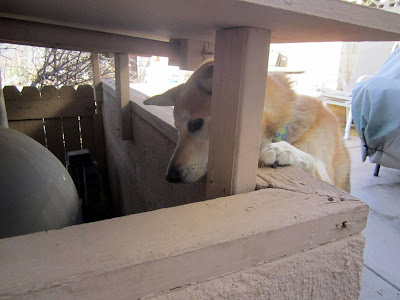 I didn't mind as much this time because I didn't have to do any extra work to keep the kitties safe and I had easy access to them. I could work on socializing them every day. Except that the next day, Mama Cat saw Pat playing with the kittens and the day after that, they were gone again. That Mama is quite protective of her two little babies. She moved them so fast that I didn't get any pictures of them that week.

I went on daily kitty hunts and a few days later, I found them in the school yard. They were hidden behind a tree in what I think is a wooden sandbox frame stored on it's side. They were probably about 4 weeks old then, and they were already hissing and spitting at me...on their way to being truly feral. Boo. I pet them and talked to them until they were happy again. And then I saw Mama under the tree, giving me the stink-eye. The next day the kittens were gone from that spot, too.

I looked a few times, but couldn't find them. I thought they were gone for good. I still saw Mama, Daddy and Uncle Tabby in the usual places but never any kittens.

But after about a week, they were found! Mama Cat put them in a fenced off area behind the school that is used for crap storage. This was the best place yet. No one from the school accesses this area and best of all, my dogs are 2 block fences and an alley away! I have to climb up on their 6 foot wall and then climb down onto the step stool to be able to get them. 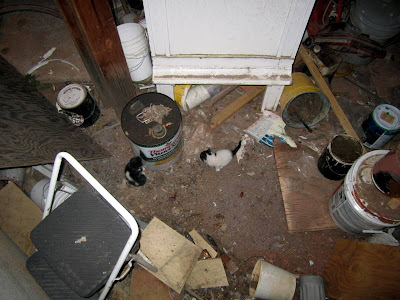 I took them out to play on Sunday night. The white one hissed at me. The black one just acted scared. After I had them out playing for a while, they warmed up and acted like normal curious kittens. This was May 15th: 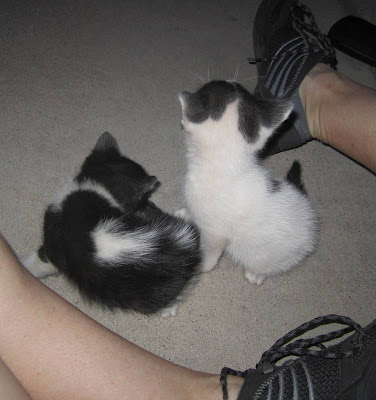 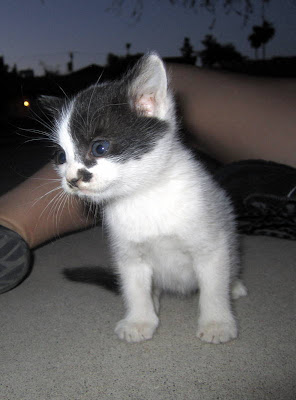 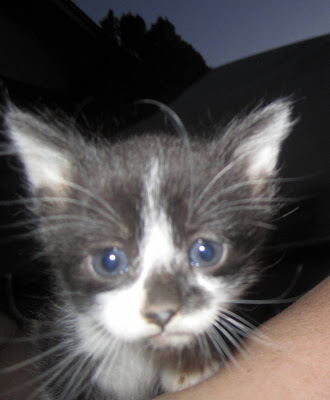 I am torn about when to take them away from Mama. I want to keep them with her for as long as possible so she can teach them all the cat things they need to learn and keep them healthy. They are still nursing right now and I'm not sure if they are ready for solid food. However, if I wait too long, Mama might move them again and I may miss my chance. I went to go get them tonight, but when I climbed up on the fence, Mama Cat was in there nursing them. I left them alone. Hopefully I didn't spook her away.

So, anyone want a kitten in a few weeks?
Posted by Diamond Girl at 10:12 PM