I've really got to stop this habit of really late recaps. Until I get that under control we're going to embrace the motto of "better late than never."

Way back on April 30th I did the Warrior Dash, a 5K mud run. Christy, Brian and Irene did it with me. About a million people (actually 16,000) other people did it too. For such a huge event, the folks at Red Frog did an amazing job of putting it on!

There are so many people that they do waves of 500 people every half hour from 9:00 am to 4:30 pm. We signed up for a morning wave because I was afraid it would be too hot if we ran later in the day. I needn't have worried. This spring has been the coldest spring ever! Brr.

The race started out with a mile run before the first obstacle. I had planned to stay with everyone and run as a group, but I really have a problem with pacing myself. I get all excited at the start of a race and ZOOM...off I go! Within a minute Christy and I had already left Brian and Irene, smarter folks who actually know how to pace themselves, in the dust. That's not just a metaphor. The race took place out in the desert and it really was dusty. And, despite what I said about it being a cold spring, for the first part of the race I was actually warm.

The obstacles were fun. They didn't allow spectators on the course and besides, we didn't bring any extra people to take pictures, so I don't have any photos of us racing. I've stolen some pictures from some friends to show you some of the obstacles. Cargo nets- this one was fun: 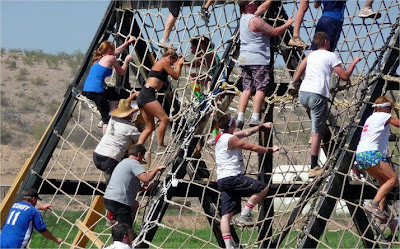 Hay bales - these were just about 2 inches too tall to be easy for my short self to climb. It was nice to have a challenge: 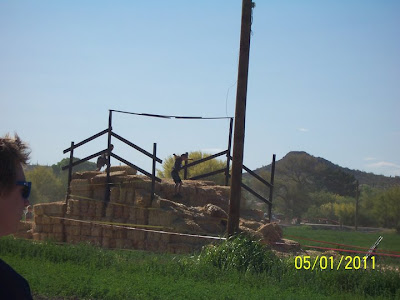 Other obstacles included half walls that you had to alternate between crawling under and hoisting yourself over, balance beams, a bunch of bungee cords to wiggle through, a bunch of tires and old cars to climb over, and a 10' wall to scale (though it had a rope so it wasn't difficult).

I loved the obstacles! The running, well, I didn't love that as much. I know I say it all the time, but I really don't enjoy running. After my fast sprint start, I got bored and we walked some. For the rest of the race we pretty much used running merely as a means to keep away from crowds of people at the obstacles. If we came up on slower people, we ran to pass them. Other than that, we walked. It's not that we couldn't have run, there just didn't seem to be much of a point. With 16,000 competitors, we weren't going to win and as long as we weren't last our time didn't really matter.

The end of the 5K brought the signature fire and mud obstacles. When we first heard about this event, it sounded pretty darn cool to have to/get to jump over fire. However, when we got there, the fire wasn't all that daunting. Here is my friend Johnny leaping the flames. 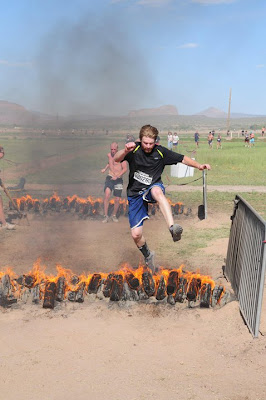 Right after the fire was the mud pit. This mud was pretty good as far as mud races go. The first section was really deep so you immediately sink waist deep when you step in. Then you are forced to get down and dirty because there is barbed wire stretched across the mud pit. Here is Wayne finishing his swim through the mud. 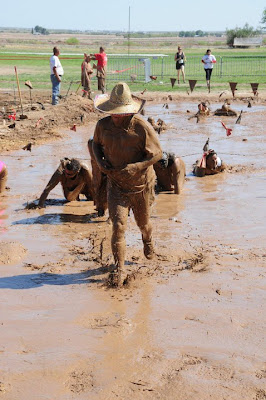 Once we got through the mud and were soaking wet, I was no longer warm. I was actually ridiculously cold. And I could not warm up! Even after we changed into dry clothes and though it was probably 78 degrees, I was still shivering like crazy. Just a side note - this crazy-cold thing that I have is one of the reasons I moved to Phoenix and is one of the reasons why I love it here. Hurray for summer!! 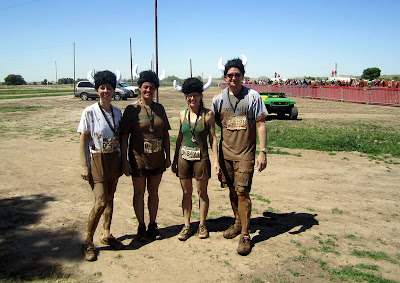