With one contest won, it was time to start concentrating on winning the race and $2,000! I started doing my homework, reading up on blogs from prior New York GUR's and finding out more about my competition. One winner was a young kid from Southern California who looked buff and fit in his video. He could definitely beat us in a foot race, but I was positive that our race experience would beat his speed. The other winner was a woman, also from Southern California, who has done quite a few clue-solving races. In fact, just that month she had finished 12th in two different CitySolve races! Presumably one was in her home town and one was not, so this shows that she's pretty smart and good at these races. She might be a match for us in the experience department so we were hoping we'd be able to beat them in a foot race. And, of course, we had secret weapons - Little Tom and Rick from Scavenger Dash as our crack-team of googlers!

We met our SOYJOY rep and the other teams on Saturday morning to walk over to the race venue together. We got to take a bunch of SOYJOY promo pictures. We are kind of famous. 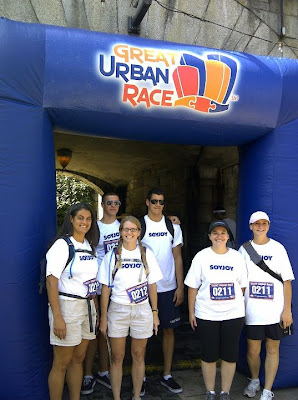 Maysoun also met us at the race start. She was in place as another secret weapon in case there was a visual clue that only a New Yorker would know. It was so great to see her! She is 5 months pregnant and cute as can be. She and Pat found a good table, ordered a little lunch and prepared to be our on-site race support. 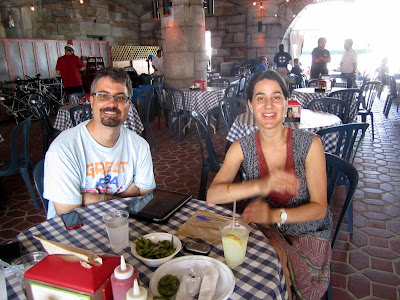 At noon we got our clues. We took pictures, sending the front page to Rick and the back page to Tom. 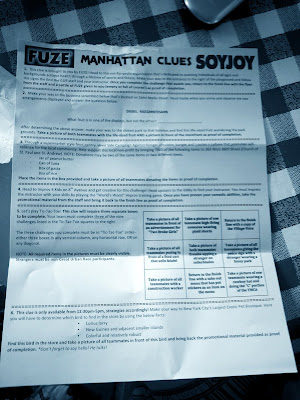 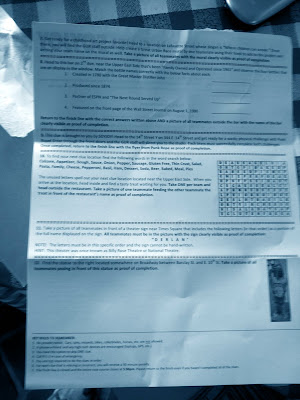 There was, in fact, a visual clue so we checked that with Maysoun. She sort-of knew the area but didn't know the exact statue, so we marked down the vicinity on my map and took off. As part of my race research, I had mapped the location of the charity partner, West Side Campaign Against Hunger. As expected one clue had us buy food to donate to them. They were located near the start line so we decided to do that clue first while Tom and Rick were solving the other clues. As I was buying food, Christy started solving the word search clue.

Here we are on our way to our first clue, just behind the boys: 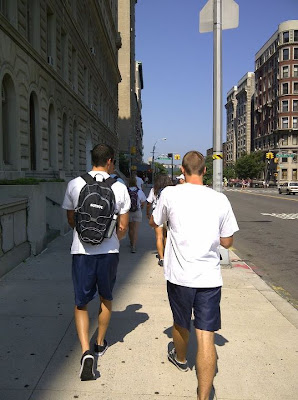 Donating our cans of food: 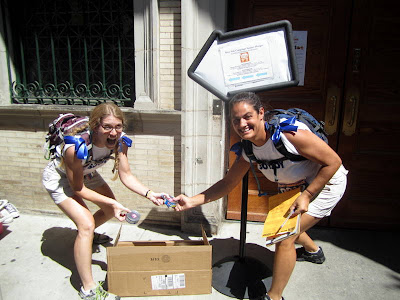 By this time, Rick had given us the answer to clue #6 and it was right near the food bank! A lot nearer than I thought actually, because we overshot it by a block and a half before I realized my mistake. Picture with the bird: 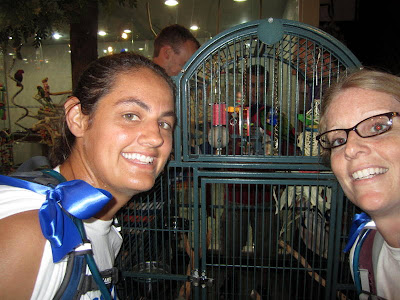 And guess who was at the pet store, too? Yep - the boys! Yikes times two!

There was a subway entrance across the street from the pet store. It was one of those sneaky ones that are hardly noticeable unless you already knew it was there. We hoped the boys didn't see it and hoped they didn't see us as we ran down the steps.

While waiting for the train we plotted a few more of the clues that Tom and Rick had sent. Not all the clues were solved yet, so deciding where to go was tricky. We decided to go to Times Square since there were two clues in the area that we knew of, then we'd continue south again if we needed to. The hardest part about this race was that our only downtime was in the subways, and phones don't work in the subways so we couldn't use that time to communicate with our internet support.

When we popped up at Times Square we headed to the Improv for Kids theater. We had to play the "World's Worst improv training game", which was to tell the guy there a joke and make him laugh. Of course, I told my favorite joke (Why'd the cowboy get a wiener dog? ...Because he wanted to get a long little doggie - drawling out the punchline). Because that joke is hilarious, the guy laughed and gave us a flyer as proof of completion. As we were leaving we overheard the next team start their joke, "Why did the chicken..." The guy didn't even let them finish. He said "NO chicken jokes!" Hee! We were gone before they came up with a different joke to tell.

Nearby, we found the Nederlander Theater: 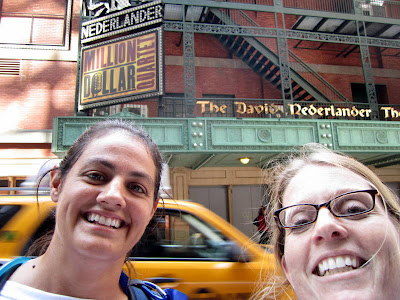 We had to take a break there to finish mapping our clues. Rick and Tom had given us all the info we needed and we had yet to finish plotting the map. The visual clue was still a guess and the area it was in was the furthest point south, so we chose to use that as our skip. We had one clue in Soho, two in the East Village and three in the Upper East Side. We sat on some steps while I mapped the locations and I very nearly lost my camera there. We were only a half block away when I did my usual phone-and-camera-and-map-and-pen check. Oops, no camera! Ran back and luckily it was still sitting on the steps. Whew!

On the way to the subway we got one of our tic tac toe pictures; one teammate in a cowboy hat doing the C in YMCA: 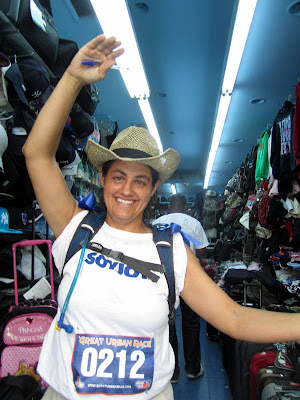 The tic tac toe challenge was truly a challenge for us. We ended up getting 6 of the 9 boxes before finally making a line. There just aren't enough rollerbladers in NYC!

We took a subway to Soho. We had to go to the Children's Museum of the Arts and add our hand print and team name to the mural. This would have been a good time to be named something shorter than Storming the Castle! 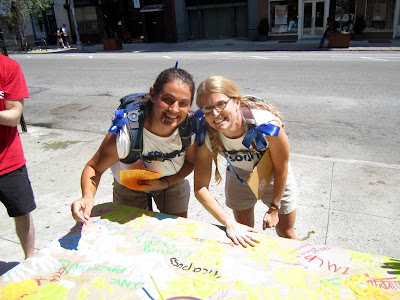 A local on the subway had told us that it would be faster to walk/run up to the East Village than to try to catch another train, so we hoofed it what seemed like a really, really, really, really long way. The guy also told us that we'd pass the Village Voice offices on our way, so we'd probably be able to find a newspaper there for our tic tac toe clue. He was right! And with that we finally made a line!

Our next stop was Edible Arrangements. There we had to look at two fruit arrangements and figure out which fruit was in one arrangement but not the other. It was strawberries. To keep going with the strawberry theme, we had to go to a park nearby to take a picture in a giant fruit costume: 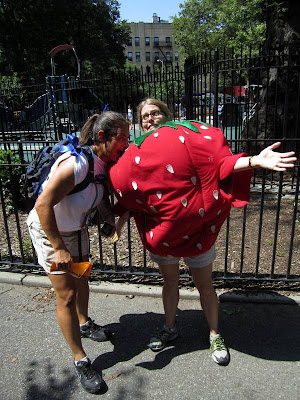 Our next stop was the 14th Street Y to the clue sponsored by SOYJOY. Our SOYJOY rep was there taking pictures. First we had to throw rubber chickens across the room into a laundry basket. That was pretty dang fun, and I actually got lucky sooner than I thought I would! Yay! Then we had to tandem jump rope. We weren't exactly together, but we still managed to keep the rope going long enough for it to count: 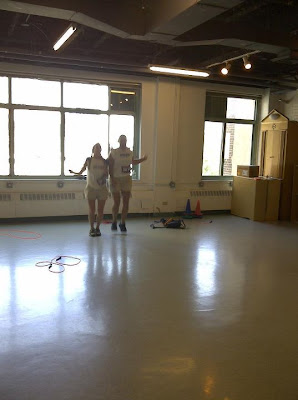 After that, it was back to the subway to go to the Upper East Side. We'd been out on the course for well over two hours, we still had three checkpoints to hit and we were tired. The Phoenix race took us 1 hour and 45 minutes total. This Manhattan race was LONG! I started to panic a little bit that perhaps we were sucking as bad as we did in Vegas. A quick text to Pat and Maysoun let us know that no one had finished yet so that perked us up a bit.

In the subway we talked to some more locals about the benefit of taking the 4 or 5 train versus the 6, which is the express. The lady was going to our same stop and she was going to take whichever came first. The 4 came first and we decided to get on, instead of waiting for a 6 that might get us there faster. We found out later that no express trains were running that day, so we made a good decision!

I studied my bus map while we were on the train. If we could catch a bus right away, we'd be able to go to our farthest destination first and work our way back. If there were no buses, we'd do the opposite. Lucky, lucky us...as we emerged from the subway, a bus was pulling up right in front of us! Woo hoo! It took us all the way to Asphalt Green, the answer for clue #1. A lot of teams had problems with this one, but not us (because Little Tom is a genius!) We had to go up 7 flights of stairs. It was brutal! When we reached the roof, we had to do a team yoga pose. We headed back down the stairs. We'd gone down two flights when I did my phone-and-camera-and-map-and-pen check. Frick. No map! No pen! Back up two flights. Lucky again, my clipboard was still there!

Back down the seven flights of stairs and off to Luigi's. We had to get a picture of one teammate feeding the other teammate a slice of pizza. The pizza was good but so much running had left me feeling yucky, so I sadly threw the slice away. :( 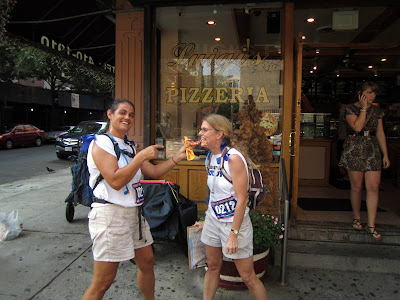 One more clue to go! Somewhere along the way, Pat texted me that someone had already won. He confirmed it was not a SOYJOY team, so that was good. We hustled (as much as we could) to Brady's bar for the last clue. 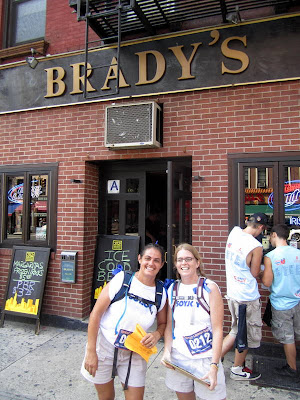 The finish line was 2 miles away so we waited for a bus. We did not have 2 miles left in us! There was another team at the bus stop waiting. We let them know that some teams had already finished. We confirmed with Pat again that no SOYJOY teams were back yet. Pat also said that there weren't that many teams back, we could still finish in the top 25. While it would be super-cool to finish in the top 25, we already qualified for Nationals so we didn't worry too much about that. We just needed to beat the other SOYJOY teams! I was getting super nervous!

The bus came. Another team joined us. The bus slowly...slowly...slowly crept across town. I was getting sick to my stomach worrying about the other SOYJOY teams. The bus let us off about a block from the finish line bar. We raced the other two teams. One team beat us by A LOT and we beat the other team.

As we crossed the finish line, Pat told us that the other two SOYJOY teams had not finished yet. REALLY?! I kept looking around to make sure. Then we saw our SOYJOY rep and she confirmed that we were the first team back!! WOO HOO!! 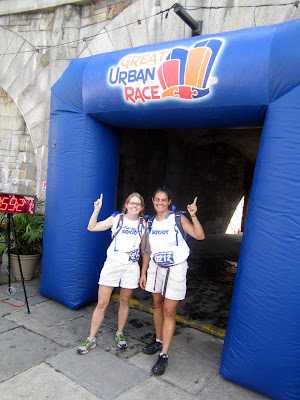 The boys were the next team back, but they actually didn't finish the race. They did 5 clues and then took a taxi back. They did it all on foot until the taxi. Poor boys were even more tired than we were. The girls made it back around 5:00, also not quite finishing the race. One of the Great Urban Race girls told me that last year the Manhattan feedback was that the race was too short and too easy so they made it longer this year. It definitely was a lot longer than the Phoenix race!! But it was really, really fun!

Thanks to Great Urban Race and BIG THANKS TO SOYJOY! Also big thanks to Rick and Tom - you boys ROCK! I had such a great weekend that I hardly even minded when our Sunday afternoon flight was delayed 3+ hours and then we spent an additional 2+ hours on the runway before taking off. :)
Posted by Diamond Girl at 9:23 PM

I have declared a rematch on Manhattan. We couldn't believe how badly it kicked our behinds!