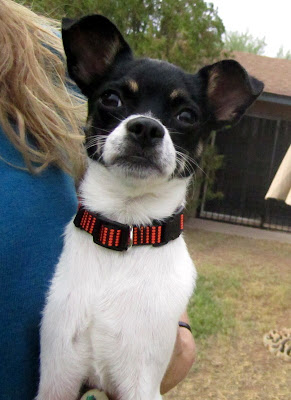 After about a zillion weeks in various casts, Corky got to stay with us for three more weeks, first with low exercise and then increasing his freedom until we got to the point where we are now. And what point is that? It's the point where Corky tears around the house like a madman, jumping on and over everything in sight. He gets on the furniture, and I don't just mean the couch. He climbs over the couch and hangs out on the side table. He jumps from the couch onto the coffee table. In Corky's mind, nothing is off-limits. He is an agile daredevil!

He loves the other dogs and he assumes they love him, too. He will go right up to Frankie and try to take the toy right out of his mouth. He will jump on Georgie and bite her ears. Occasionally they oblige him with a game of tug-of-war or wrestling.

Corky really loves to chew on bones, especially if he can do it as a group activity. He'll grab a bone and crawl right onto a canine-occupied bed. My dogs are surprisingly tolerant of this. Well, Frankie is anyway: 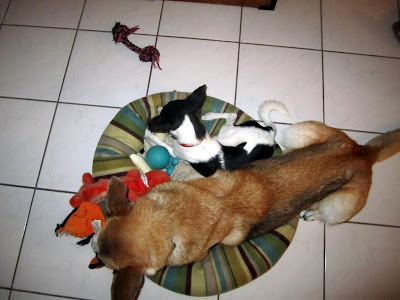 Mo, on the other hand, does NOT like it when Corky tries to share her bed. Perhaps it is because he uses her as a bed: 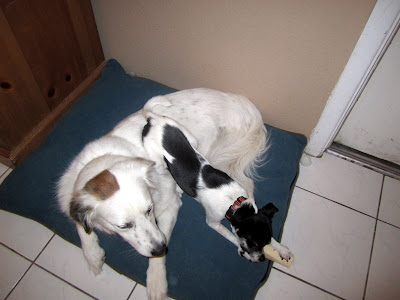 She growls at him but he is oblivious. He just keeps chewing his bone as if he can't hear her. 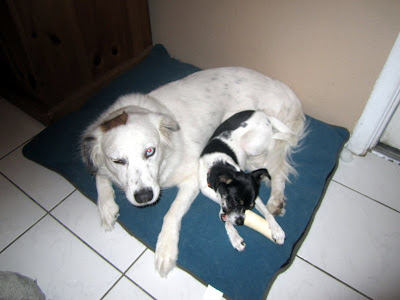 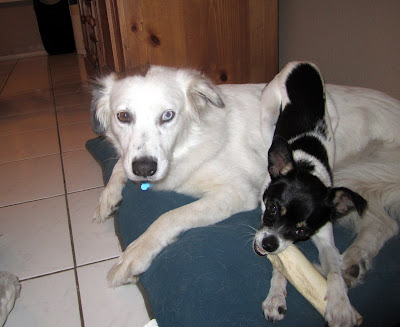 I will be returning Corky to the Humane Society this week. I sure hope he finds a home with other doggies to play with!
Posted by Diamond Girl at 10:31 PM

Poor Mo, so patient! Young dogs and human toddlers have a lot in common, it's ALL about them. But you gotta love their zest for life.

He's a happy little dude - enjoys life! We should be so carefree. :)