Today we competed in the Hybrid Adventure Games, a newcomer on the obstacle/adventure race scene. H.A.G. is different that most obstacle races in that 1) the run is just a run (or as I like to call it, "a hike") and 2) all the fun stuff happens after the run is completed and 3) each of the events is scored separately. Genius idea! I suck at running, but I rock at obstacles... I felt that with the H.A.G. I would finally get credit for my awesome balance beam skills!

The first event is the run, followed by four additional events you could do in any order: 100 yard tire flip, keg toss, obstacle course and archery. They score each event based on the place you finish overall. First place gets 1000 points, second place 995, third 900 etc. Then they add up your totals for all 5 events to determine the winners. 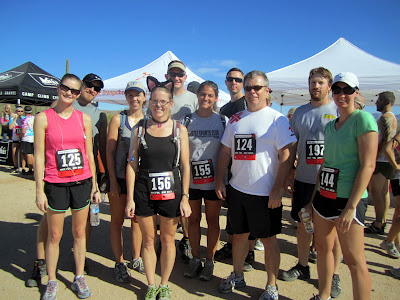 I did not name the team! I couldn't get anyone to dress as donkeys (i.e. asses) so a team costume and the resulting "spirit points" did not happen. But despite my no-fun teammates, I was not going to miss a costume opportunity. I dressed as a cat, which has absolutely no correlation to our team name. A cat was chosen because it is the coolest costume (i.e. cool as in temperature) I own. "Cool" was quite important as it was 100' today. The run and the venue were shade-less and the sun was brutal! 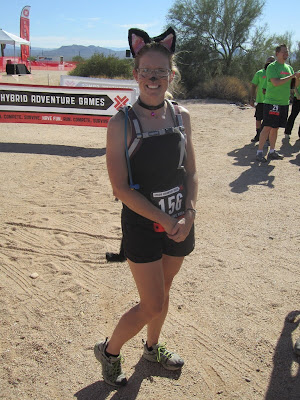 We had one fan - Johnny's wife, Kelly. 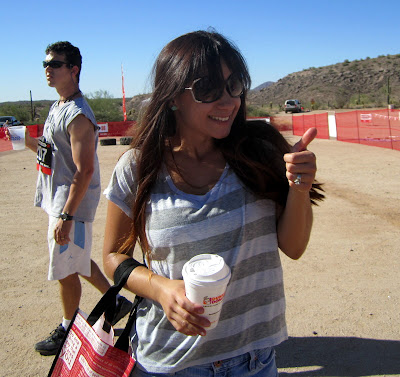 The first event was a 5.4 mile trail run, which I prefer to call "a hike". I hate running. I like hiking. Since it was "a hike", Christy and I mostly walked it. We did give a little credence to the fact that it was a race, thus we ran the downhills. :) I'm very glad I wore the camelbak for the "hike". I would have died out there. There were water stations on the course, but I require a lot more hydration that water stations can provide me!

Christy and I finished 7th and 8th out of our team of 10 and probably at about half or in the bottom half of the field. Our time was 1:17. I figured it would take 1:30, so we were quite pleased with our time! 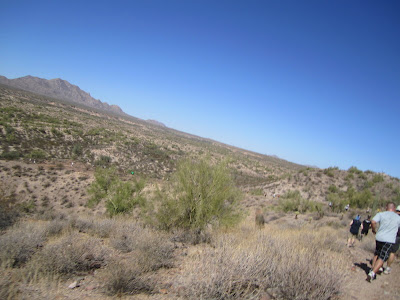 I took that picture during the first mile. If you click the picture to make it big, you can see that already there are A LOT of people A LOT ahead of us. :) I guess no one told them that this event was "a hike"!

After the run ("hike") we did archery next. Based on my one other previous encounter with a bow and arrow (I kept letting go of my left hand, thus dropping the bow instead of shooting the arrow), I had very low expectations for this event. 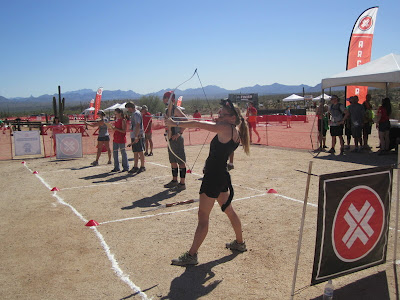 Perhaps if I stood a little closer to the line, I might have done a little better? However, I did hit the target on one of the three tries and hit the 7 point ring. Woo hoo!! I'm sure I still finished in the bottom half overall, probably even the bottom quarter. Irene rocked the archery - she got the 9 point ring twice and a 2 point ring! Some of the boys on our team did pretty well in this event too. It was definitely fun to do!

Next we went to the keg toss. The most effective way seemed to be to hold the keg in one hand and spin like a discus thrower. Yeah, that would be a horrible idea for me as my coordination issues would make it such that the keg would inevitably go towards the crowd. I saw one girl stand backwards and throw it 2-handed over her head. Doing it this way seemed like the safest option for all involved. 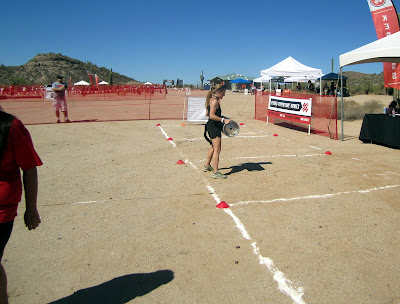 The keg went about 5 feet. :( I'm sure I placed in the bottom quarter in this one! Most of team did pretty well. Irene and Christy rocked it for the girls division. Check out how far Irene's keg is flying: 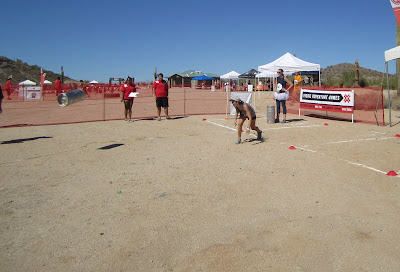 Next we went to the obstacle race. I wanted to do this before the tire flip so that my arms wouldn't be too tired to lift myself over the wall. And I was anxious to show off my balance beam skills that I was so proud of in the Warrior Dash! My heat included Wayne, Christy and me. Here is the video of my run. Olivia was filming and she was running to get it all, so it's a little shaky:


As you probably noticed, I really SUCKED at the balance beam. Oops, I guess that isn't my strong suit after all. I was off balance from the very first step! Wayne, however, had no problems! 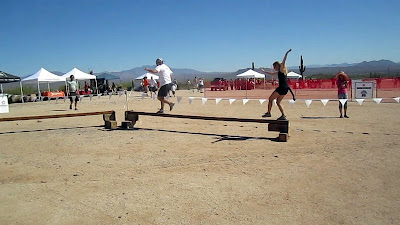 I was also surprised that I couldn't do the overs in one jump. I had to put my feet on the bar and jump down. Wow, perhaps obstacle courses in general aren't my thing! However, I rocked the barbed wire and I was able to get over the wall in one try. I'm guessing I finished top half in this event. No matter how I finished, I love obstacle courses!

Brian, Irene, Daren, Emily and Johnny ran in the next heat. Out of 5, we lost 2 of our racers in this event. The first aid folks had their hands full today! This video shows Brian spraining his ankle on the first over.


Poor Brian! After checking to make sure Brian wasn't dead, Emily continued her obstacle course, only to be done in by the ramp. The ramp: 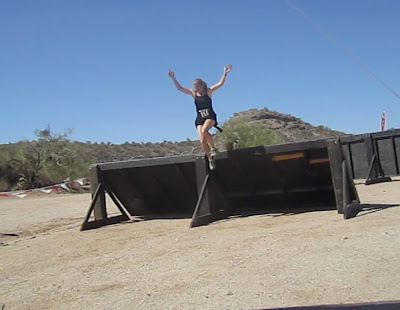 As you run up it, you can't see that there is no other side to it. Emily expected it to be an a-frame and kept running down the down-ramp that wasn't there. I think it looked like this: 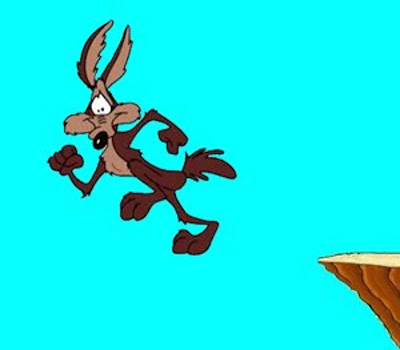 Happily, she did not make an Emily-shaped crater on the landing, but she did end up with a badly scraped knee, scraped-up hands and a badly twisted ankle. Poor Emily! 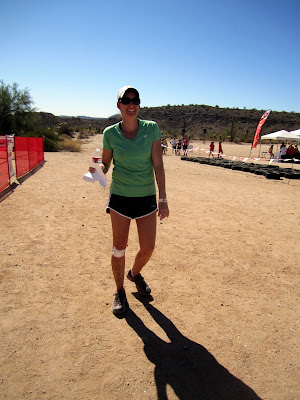 And that was the end of Brian and Emily's adventure. Sadly, the event that Emily and Brian most wanted to do at the games was the tire flip. :(

After making sure all our friends were going to survive and were appropriately iced down, those of us who were still ambulatory made our way to our last event, the tire flip. The race was 100 feet and you had to flip a tractor tire there and back. Daren had the best form (he's the guy on the far side): 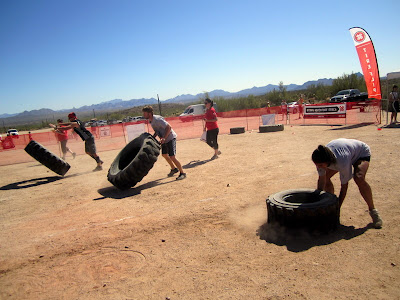 Girls got to use smaller tires if they wanted. The tires were a little bit lighter, but they were also harder to control. They had a tendency to flip sideways on the bounce down so you spent more time corralling them before the next flip. It was definitely a workout! 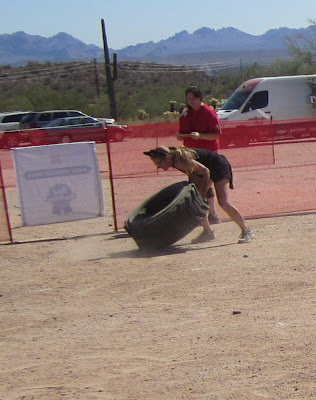 In our heat, Irene and I were neck-and-neck. 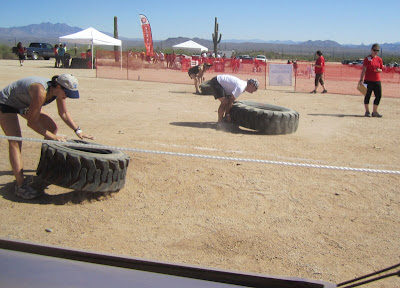 I beat her by a teeny tiny margin. My scorer told me that my time was 39 seconds and that was one of the best times she'd seen for a girl so far. Yay, an event that I would place in the top half!

After we finished all the events, we found a very small piece of shade in the beer tent. It was soooo very hot!! A lot of people left instead of sticking around for the award ceremony. Wusses. But, seriously, it was hot! But we stayed because we are troupers. I like to see winners and I was pretty sure that Irene was going to win the women's division in archery. I didn't want to miss that!

I was starting to get impatient because the Coyotes home opener started at 4:00 and the arena was over an hour away. I didn't want to miss puck drop! Just as I was about to give in and go, it was announced that the scores were tallied and awards started. Yay! They asked us to leave the beer tent to come over to the podium area. Really? Too sunny. Too hot. We wanted to stay in the shade of the tent. So, we decided to take the tent with us. :) We carried it over to the podium area, then a couple others followed suit with another shade tent. Voila!

They announced the run (aka "hike") winners first. Yeah, no one from our team. I had thought Irene and Christy did well in the keg toss, but Irene's toss of 19 feet was shattered by a girl with 39 feet! WOW! So, no winners on our team. The obstacle course was not won by anyone in our group either. But... Irene DID win the women's archery competition: 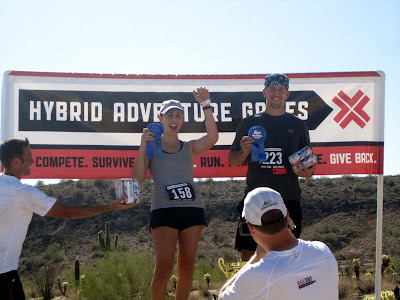 A Pabst blue ribbon and a 4-pack of Pabst Blue Ribbon!

And...guess who won the tire flip? Um... I DID!! I was so shocked and so happy! I couldn't stop smiling for about an hour! 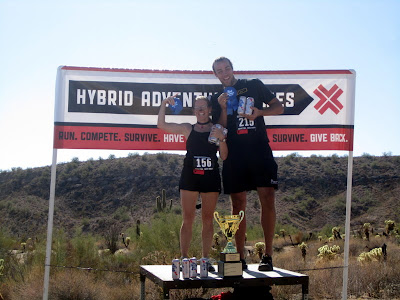 Look at how tall the men's winner is!! He definitely had leverage going for him! His time was 24 seconds. Mine was 39!! Dang!

So excited!!!! Irene and I with our Pabst blue ribbons: Despite our awesome showing, our team did not win the team division. I can't wait to see the results of all of the events to see how we all placed. I think we did pretty well as a team, but we could have used a few more people to bring up our point totals! Next year!!

This event was really awesome! I can't wait to do it again! And you should do it with me! Join my team for the next H.A.G.!!

Then, with no time to take a shower to clean off all the sweat and dust and dirt and sweat, I changed into winter clothes on the drive to Glendale. Ew. At the game I got even more prizes, a free t-shirt and a free taco coupon from the Taco Bell blimp! Woo hoo! Ok, so the t-shirt wasn't really a prize - all fans got one. But I did have to fight for it since my entrance was out of shirts when I got there and then I had to find someone to trade their medium for my extra-large, so I felt like it was a victory nonetheless. AND, the Coyotes won 4-1! Hurray!

What a great day!
Posted by Diamond Girl at 8:36 PM

Awesome write-up Jill, and congrats on the tire flipping win! Did you notice in your video I am nowhere to be found after the balance beam but near the end you almost caught me at the wall. I slipped (from the water on the barbed wire plastic) and got stuck with my chest on the wall for like 8 seconds!

Good lord, you're hardcore! You did the race, went to the coyotes game and then wrote a blog post? I did nothing the rest of the day and plan to do very little even today! Congrats on your tire flip win!

Oh my gosh!! That sounds like so much fun!!! Congrats on your tire flip win! You are my idol!

Tiny but might! Congrats on the tire flip win. You rock!!