This is not a happy post about the typical usage of the phrase "foster failure". This is a sad story about how I failed my latest foster. 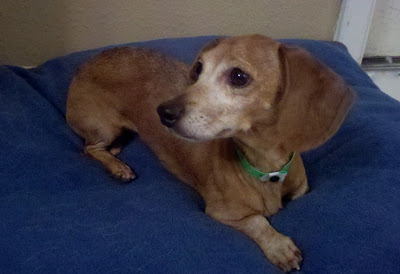 Lola was a 6 year old dachshund who needed a foster home to fatten her up. She was just skin and bones, all ribs and sticky-out spine. She weighed 8.3 pounds. Her healthy weight would have been around 10 pounds. She also had bad dental issues. She had to have a lot of her teeth pulled. She recovered from that surgery in a different foster home but they could not keep her.

Lola was very scared when I picked her up from the Humane Society. She was shaking like crazy. She calmed down a little bit when I got her home, but she was still nervous. She was very submissive to my dogs and my cat so they accepted her immediately. She seemed happy when sitting in my lap, so we spent the night on the couch watching a movie.

I don't have a very good picture that shows how emaciated she was. This is as good a photo as I have, but trust me that she looked worse in real life: 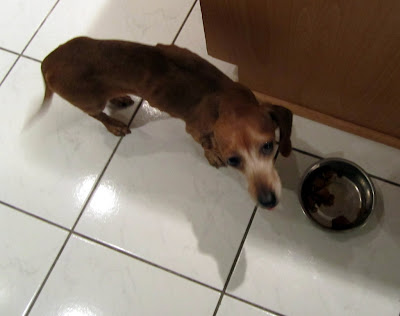 During the next week Lola got more and more comfortable at my house. At first, her only voluntary interaction with me was if I would sit on the floor, she would very slowly and very deliberately crawl into my lap, as if she was hoping I wouldn't notice and shoo her away. After a few days, she'd just plop down in my lap as if she owned it. Eventually she felt comfortable enough to play. She liked to smell the cat and then run circles around him. She loved squeaky toys. She couldn't get enough of playing fetch, though I always kept the sessions short because she was supposed to be gaining weight not burning it all off.

It was also hard for her to gain weight because she had lots of nervous energy. If she wasn't playing or cuddling with us, she was running from room to room to room. I was never sure if she was looking for the cat or just checking her perimeters for safety, but I finally took to putting her in an x-pen to keep her from running so much. I think she felt calmer being confined like that, because she would then lay down on the doggie bed and play with her toys. Squeaky-squeaky-squeaky...

She enjoyed snuggling up on the dog beds with the other dogs. She correctly interpreted Mo's warning growls as being false alarms. :) Mo pretending that Lola isn't there: 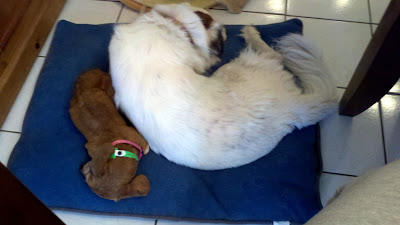 Look at that face! What a sweetie! 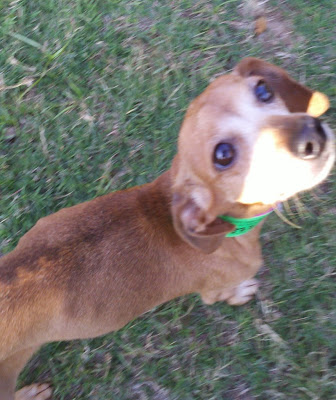 As I mentioned before, Lola loved squeaky toys. Frankie loves squeaky toys too. Lola did not think that Frankie should be allowed to have the squeaky toys, because they were her toys. Sometimes they ended up playing tug-of-war with a toy, sometimes she would just bite him and take the toy away. 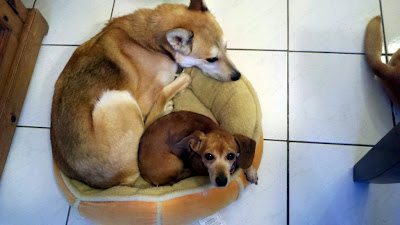 Last night, Lola decided a squeaky toy belonged to her and tried to steal it from Frankie. He tugged back, and being 25 pounds bigger than her, he had the leverage and the advantage. She was a little spitfire and didn't give up...and then I heard her scream in pain. I jumped up and saw blood everywhere. Frankie was already riled up from her picking on him, and her cries and screams riled up Georgie and Mo too. It took a few seconds for me to wade through the crowd of dogs to get to her.

Blood was pouring out of her mouth. I thought at first that Frankie must have bit her face. I put her in the sink to wash away the blood and find the wound. Eventually I washed away enough blood to realize it was her gums that were bleeding. I was able to use a towel to put pressure on the area to try to stop the bleeding and determine that a tooth had been partially yanked out. Yikes. I called the Emergency Animal Clinic and I even paged the Humane Society number that is for life-threatening emergencies only. Both techs I talked to said to keep her calm overnight and bring her to the Humane Society first thing in the morning (they don't staff veterinarians overnight). They told me that as long as the bleeding wasn't heavy, she would be okay.

I could tell the pain was pretty bad for her. I felt so terrible.

I put her crate right next to my bed for the night. She didn't cry at all. She didn't move around much, so I think she might have slept some. In the morning, the bed was a bit bloody in places and when I checked, the gums were still bleeding. Poor little Lola. She was scared and in pain. She reverted back to the scared little dog she was when I got her. She would barely crawl into my lap. She was scared of every movement. It was awful. She had been progressing and now she was back at square one, except it was worse because now she was injured too.

I took her to the Humane Society as soon as they opened. She was absolutely terrified, shaking even more than before. I was worried because they would have to anesthetize her to fix her tooth, and with 0% body fat that is a dangerous undertaking. I had weighed her before we left...8.3 pounds, exactly what she was when I got her. I suck. I didn't help her gain weight at all.

And this is where my terrible story of foster failure gets even more terrible. The Humane Society staff called me with an update: In addition to the tooth being pulled out, Frankie had broken her jaw. Her jaw bones were very weak and deteriorated, which was part of her dental problem to begin with. Because her bones were so deteriorated, they did not have the means or the resources to fix the fracture. They decided the best option would be to euthanize her while she was still under the anesthesia. Sadly, I don't have the means or the resources either so I had to agree.

Good night, sweet Lola. I failed you and I am so, so sorry. I miss the pitter-patter of your little paws as you run up and down the hall. I miss your little tail wagging at warp speed. I miss you curled up in a tiny ball on my lap. I miss your super soft fur on your long ears.

I was supposed to provide you with a safe place to get healthy for your second chance at the happy life you deserved. I failed you.
Posted by Diamond Girl at 9:22 PM

How sad, but you did not fail Lola. She had a happy dog life with you. Lola's health was really bad when she came to you, that was the cause of her demise. The goal was to get her healthy but that may not have been possible. Her stay with you was more of a hospice situation, only you didn't know that at the time. Remember Lola at her best, having fun and cuddling with you and your dogs.

very sad story indeed, but you did something 98% of the population would not do and that is trying to help. you should be very proud of that.

It should go without saying that you are an uber successful and caring foster parent. But I will say it and remind you :) Very few people, including myself, could do what you do on a regular basis. You couldn't have changed her previous life and circumstances, but at least she got to play and cuddle and feel loved. That is what you are responsible for.