After the AZ Urban Race, I went back home for a few minutes, then it was off to the Rugged Maniac. Jamie agreed to go with me and take race photos if I bought him ChickFilA. That was a pretty good deal.

The Rugged Maniac is an obstacle/mud run, a lot like the Warrior Dash. It was awesome!

Here is the race, in pictures:

Waiting for the start with my very few fellow racers. 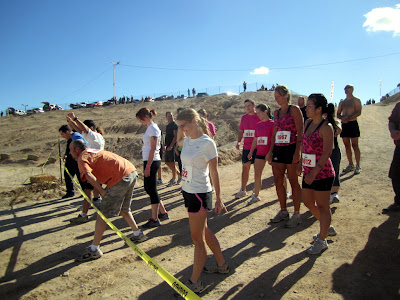 That guy in the orange tripped over the caution tape when the gun sounded. He didn't even lift his feet to try to get over. He just started running. It was pretty funny.

The first part of the race was mostly running. 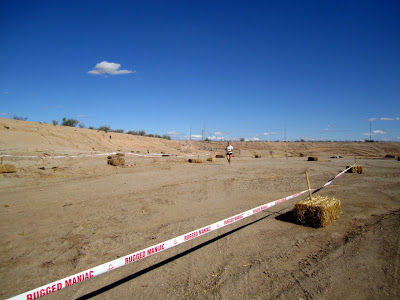 There were some hills and some rope climbs, too, but mostly running.

The start of the fun stuff with a series of small walls: 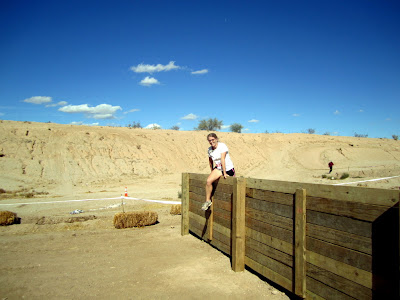 Then we had a series of posts to jump and balance on. In the course map online, this was supposed to be surrounded by water so you'd get wet if you fell off. Arizona is too dry for this, I guess. This one was really fun! 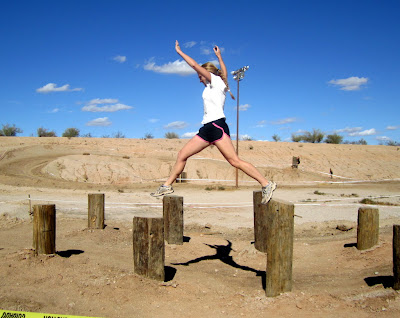 A jungle of tires: 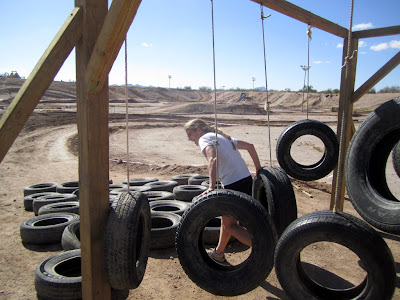 The first of the mud pits: 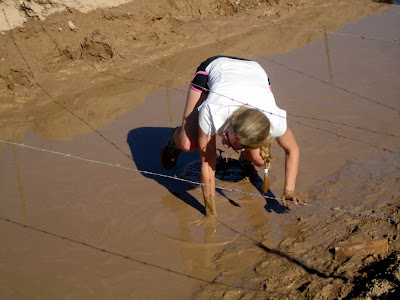 I didn't get very muddy on this one. This was a really cold day and I was putting off getting wet as long as possible. Pretty wussy attitude for a mud run, huh?

Then came the best obstacle of all, the big slide. No avoiding getting wet on this one! 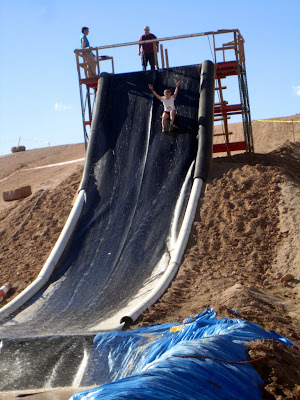 That lip on the end of the slide sent me flying in the air. It was awesome! It was enough to make me go completely under water when I landed.

The slide pool finished with this obstacle: 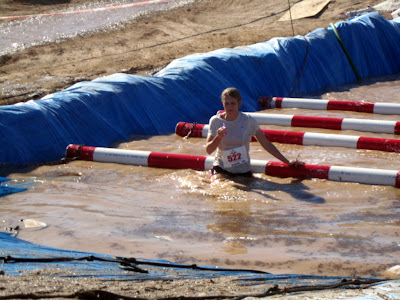 As a bonus, I found someone's vampire teeth floating in the mud.

Up a really big hill: 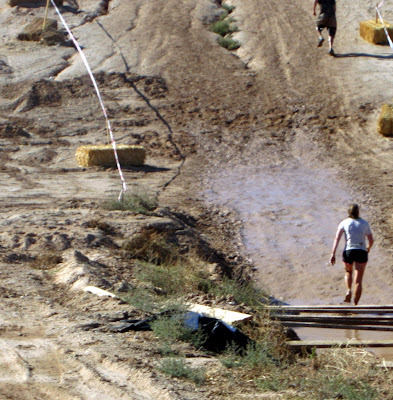 Down a really big hill: 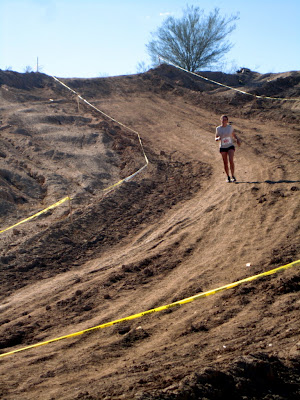 Up another really big hill that required ropes to get up: 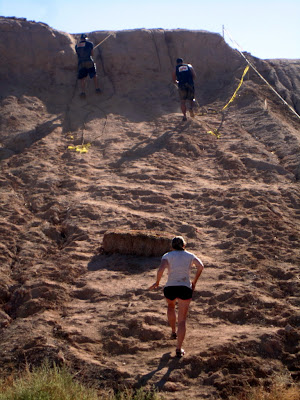 Over a cargo net: 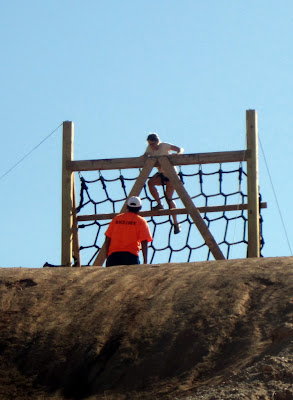 From the top of the structure, you had to jump off and land on a high jump mat. The guy standing there catches you if you bounce off, like I did. There was another structure next to this one. There was a girl on the top of it who was scared to jump off. She must have been there a long time because she was in a heat ahead of mine. The guy at the bottom was saying "Ok, ready, 1...2...3!" and she'd say "4". It was pretty funny. I wonder if she ever jumped or if she just climbed back down the way she came up. 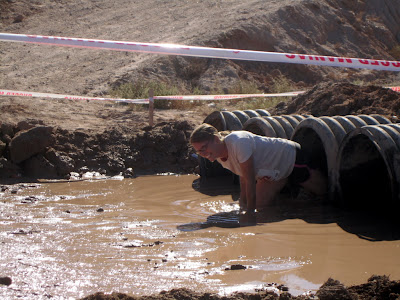 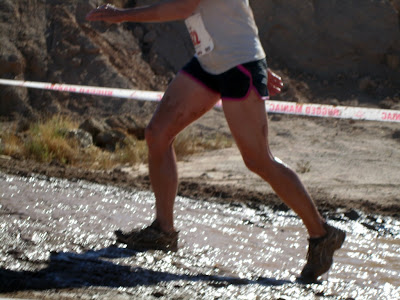 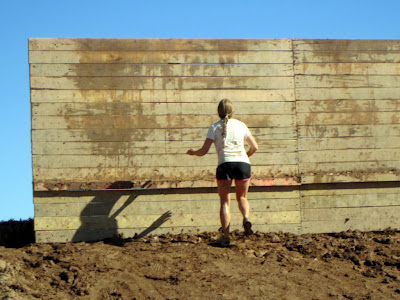 I used the edge to climb up: 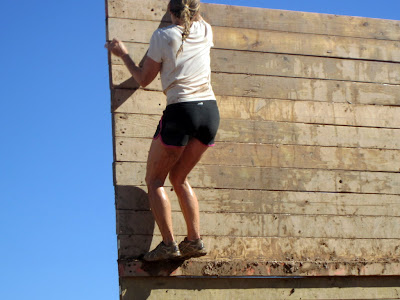 This was right after the water tunnels so my hands were muddy and wet. On my first attempt to pull myself up, my hands slipped right off the wood. Ouch.

Better prepared the second time, I got up and over: 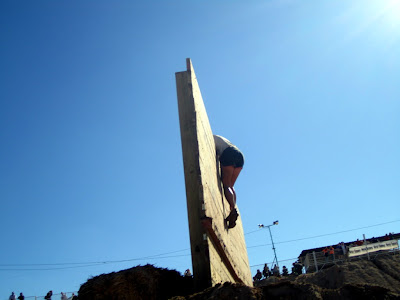 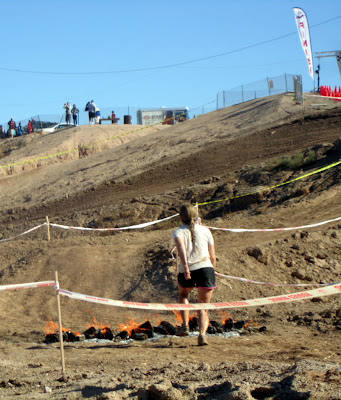 Actually, the final obstacle was the really steep hill up to that finish flag!

Woo hoo! I am a Rugged Maniac! 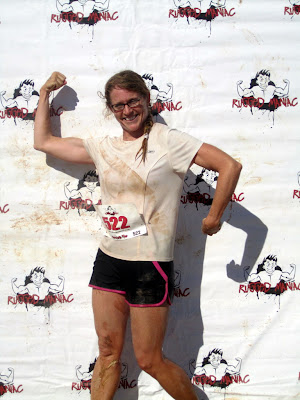 Thank you, Jamie, for taking these awesome pictures! Maybe I would have liked the Warrior Dash more if I had pictures of it.
Posted by Diamond Girl at 10:28 PM