Christy and I went to New Orleans for the Great Urban Race National Championships. 119 of the top teams in the nation came to New Orleans to compete and...CHRISTY AND I WON!! 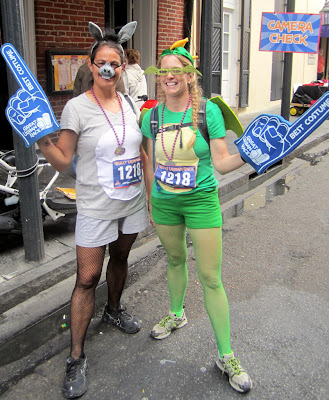 Okay, so we won the costume contest and not the actual race. But we got those super awesome foam fingers!! So, yeah, pretty much we rock!

In the actual race we placed 38th out of 119, which is much better than last year's 65th place finish (which I didn't blog about because it was so crappy) and much worse than 2009's 14th place finish. It was also much better than we thought we did, so we are guessing a lot of teams received penalties. The clues required that teams bring a lot of stuff back to the finish line so maybe people lost stuff along the way.

If you want a full race recap with clue sheets and all, you can go read the winner's blog here. I've just got a couple stories to share with you.

It was a really fun race! There were challenges or activities at every checkpoint - which is AWESOME! We were doing fairly well until we got to this challenge: 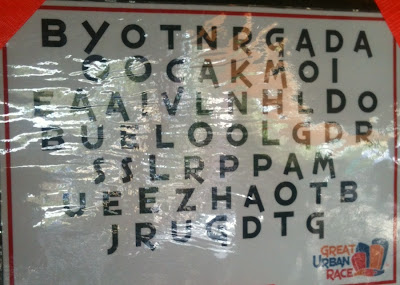 You had to unscramble these letters to form the names of 8 local beers. They gave us the first letters of each so we thought it wouldn't be too bad. We were wrong. We looked online and we looked at beers in the fridge behind the bar. We wrote stuff down, crossed out letters, guessed, were told we were wrong, again and again. We debated whether or not to give up but figured we had already spent time so we'd better finish. Dumb. Our big mistake was not leaving right away. We finally gave up and stopped to use the restroom on the way out. While Christy was waiting for me, she overheard a couple teams discussing the correct answers on their way out. I'm not ashamed to admit that we used the answers we heard and then reworked the puzzle to make the other answers fit. After about 45 minutes, we got it right! Seriously. 45 minutes on one clue. Dumb.

At this point we knew we weren't going to even come close to the top 8, so we just had fun the rest of the race. And it was fun!

One of the tic tac toe clues was to take a picture of 10 strangers lined up by height. We saw a big crowd at a cable car stop and asked them to do this with us. As I started directing them to get in the right order, they told me that they had already done this for one other team and that I was a lot bossier than that team. Me? Bossy? :) 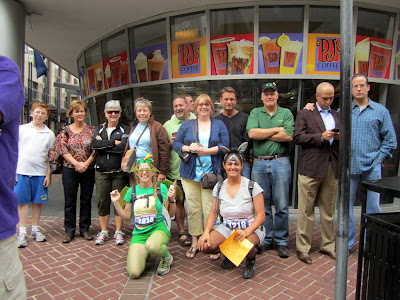 At the end of the race, we had about 15 minutes left to finish by the cut-off, and we still needed one more tic tac toe clue - a picture of us on a mechanical bull. We had seen a bar with a mechanical bull the night before, but we couldn't remember where. We asked people as we ran and they suggested Bourbon Cowboy. This bar was about 2 minutes from the finish line so we were pretty confident we would finish in time. Until we got there...and it was closed! We did not have time to find another bar. Feeling defeated, I started knocking on the door. And the cleaning lady actually answered my knock. At about this time, another team came up also needing the picture with the bull. I explained to the cleaning lady what we were doing and what we wanted. She agreed to let us in! I couldn't believe it! Woo hoo! Then the other team rudely told the lady that they were coming in too. Ok, whatever. I would have done the same thing (but hopefully less rudely). And it was fine because we agreed that if they took our picture we would take their picture. All good. But then, as I was giving the girl her camera back she elbowed me out of the way to get out of the bull pit first. Literally, with her elbow in my chest! Wtf? Rude! She should have been thanking me for getting us into the bar in the first place, not trying to beat me up. They tried to beat us in a foot race to the finish. You know I wasn't having any of that! I hoped that Christy was prepared to keep up, cuz I was gonna kill myself sprinting if I had to just to beat that bitchy girl. Christy was prepared, we ran like hell and we beat them. Ha. 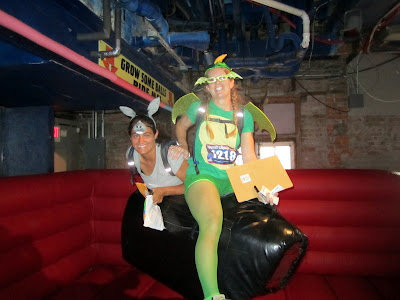 We finished an hour and a half after the winning team. Ugh. But we did beat the first place team from the Manhattan race, so that was good for our egos. All in all, it was a really fun day and a good trip to New Orleans. Our friends AJ and Olivia from Phoenix were there and it was fun to hang out with them. We got to see our race acquaintances from other cities and that was fun, too. Thanks, GUR, for another fun time!

Oh, and we are taking suggestions for a clever pun-ish costume for 2012! Send me your ideas! Draggin' Ass is going to be hard to beat.
Posted by Diamond Girl at 7:43 PM