First of all, have you voted for Frankie yet today? Please do! http://www.petsmartcharities.org/video-contest/gallery-vote-now.html Click on the Jill Diamond video, wait for it to load and then click Vote. The number should go up if your vote registers. We fell to second place today but for the moment are back in first. It's a fight to the finish for sure!

Anyway...on to the topic of this post....
For Elaine's 40th birthday, she threw herself a flash mob. If you've got a bucket list item (such as to be in a flash mob) you just gotta make it happen. So she did.

She made up a routine, she videotaped herself teaching the routine and posted the links on facebook. She invited everyone she knew and asked them to invite everyone they knew and so on. She is awesome, who could say no? Let's face it, even if I didn't like Elaine, I wouldn't have said no! Flash mobs are fun!  But since I adore Elaine, this was fun x 2! 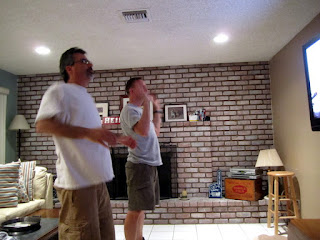 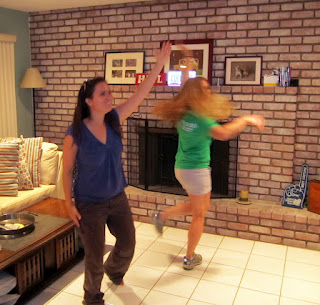 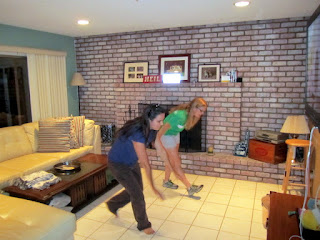 On our last practice day Christy brought Miranda over. Miranda is 12. I didn't think she'd do it because she's shy sometimes. But no, she said she would and she did. She's never taken dance but she learned the dance in one night. We 3 swing dancers took 3 full nights of practice to learn it, which just goes to show that just because I learned to swing dance, by no means am I a dancer!

Christy doesn't dance (even though I bet she would have learned it in one night too) so she videotaped it for us. The dancing started before she was ready so you don't get to see the people milling around and then all start joining in. There is a video of that but it's on a private facebook page and I can't figure out how to share it.

Elaine is the girl in hot pink off to the left. I am the spazzy one (of course) in the front (of course) in the purple-ish t-shirt. Brian is behind me also in a purple-ish shirt. Miranda is the tall thin girl in the yellow shorts. You can see Kiri for the first 10 seconds off to the right in the black tank top and pants. Then Christy realized Elaine wasn't in the video so she panned over to include the guest of honor. Sorry, Kiri. :)  Pat and his mom are way in the back so you can't see them at all.

You can see Miranda and Brian in this picture and I'm peeking out from the vines. 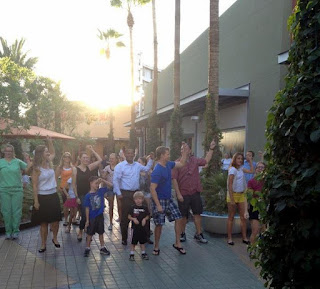 When we were hanging out waiting for the music to start I was kind of worried about the turn out. It seemed like very few people were there. But then the music started and tons of people started joining in. Where did they come from? It was awesome! It was more people than even Elaine thought would be there. We were terrible at the "walk away like nothing happened" when it was over. Everyone was so excited that we were cheering and congratulating each other and Elaine. It was really fun to be in a group of such happy and excited people. I'm so glad it was a successful flash mob for Elaine!

Here are a bunch of the dancers: 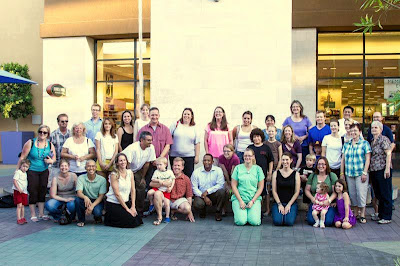 Happy birthday Elaine! GREAT JOB!!  Do we get to do it again next year? I vote for an annual tradition!
Posted by Diamond Girl at 10:25 PM