We had a crazy, record-breaking cold January. Temperatures below freezing for multiple nights in a row, which is quite unusual in Phoenix! On one of these ridiculously cold days, I saw a loose dog near the park by my house while I was driving home from work. It was a pit bull mix and I could tell she was wearing a collar.

After about 15 minutes freezing my ass off and going through almost a full bag of treats, I was able to grab her collar and slip the leash on her. As soon as the leash was on, she was immediately trusting of me like we had been friends forever. We walked around the neighborhood going door-to-door asking the neighbors if they knew her. No one knew her but I was told that she had been loose in the area for two days. This means that she was out overnight with the temperatures below freezing!! Poor little girl! No wonder she was so willing to let me catch her!

I took her to the park and asked the families there if they knew her. No luck. I took her to the EAC to have them scan for a chip. No luck. So I took her home. It took quite a bit of maneuvering to get my dogs in and out and fed, and her in and out and fed without them meeting. She seemed friendly but Frankie is sometimes sketchy and Mo doesn't always like big dogs so I didn't want to introduce them without Pat being there to hold one of the leashes. Also, it was dark out now and she was a black dog so I wouldn't really be able to see her body language when she was being introduced. So, I tied her up to the boat for a bit and I left her in the car for a bit while I moved everyone around. She was completely patient though it all. Every time I came back to her, she wagged and wiggled like crazy!

Finally I brought her into the house and to the guest room. She plopped right up onto the bed and stretched out. She almost immediately fell asleep. She must have been completely worn out from being out in the cold for all that time! 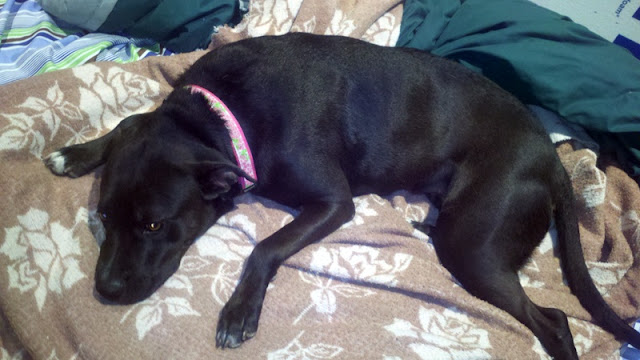 I did everything I could to find her owners. She was so well-behaved and she had on a brand new sparkly pink collar so she had to belong to someone! I searched all the websites for lost dog posts. I posted on Craigslist and PetHarbor. I posted her on my facebook wall and on a bunch of other facebook pages. I posted signs all over the neighborhood on my way to work the next day. It was 28 degrees out! My fingers were about to fall off! I emailed my neighbors. So many people pitched in to help spread the word. One of my neighbor friends emailed our Neighborhood Watch Captain and he sent her picture out to the whole area. People forwarded that email and people forwarded that. I knew it was working when I was a recipient of one of the emails! The facebook picture was shared 657 times! I posted more signs at the shelters. I posted new ads on Craigslist. And after a week...still nothing! :(

Over that week, my stray pit bull mix proved to be one of the most well-behaved, most friendly dogs ever! She liked my dogs. She ignored the cat. We had the Chocolate Chihuahua at the same time and she completely ignored the Little Shit's aggressive demeanor. She was a bit afraid of Pat at first, and other men who visited, but never showed any signs of fear-aggression and she warmed up quickly. She loved to cuddle and loved hugs. She never chewed on anything other than the bones we gave her. She was house trained. We called her Sweetie, which didn't seem like a "real" name so I changed it to Sweden. A dog named Sweden should have blond hair and blue eyes, right? Ha, not this one!  Tail wagging: 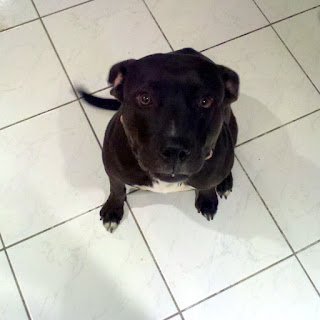 She didn't know any commands when I found her, but she learned sit in a matter of 10 minutes. She quickly learned she had to sit/stay before I would dole out her dinner. She was a smart cookie!

She was the exact same size as Mo, but weighed 10 pounds more. Yet, she still thought she fit in this dog bed: 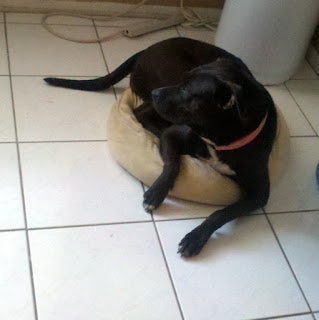 With all the emails and all the facebook photo shares going around, I had five people contact me to say they were interested in her! So awesome! I did three family visits. One family didn't work out because they were looking for a dog to wrestle and play with their black lab. Sweden and the lab got along just fine but Sweden wasn't interested in playing. She is much more interested in hanging out with her people than playing with dogs. Another guy didn't work out because his rescue pit/border collie mix (who looked a lot like Sweden!) did not like her at all. She was scared of him and hid behind me. In the end, Sweden went to a family in Glendale who used to have a Rottie (he died of old age) and felt they were ready for another dog. They have no other pets and the mom fell in love with Sweden at first sight!

Sweden's name is now Lilly. She was a wonderful house guest and I hope she has a long and happy life with her new family!!
Posted by Diamond Girl at 7:00 AM