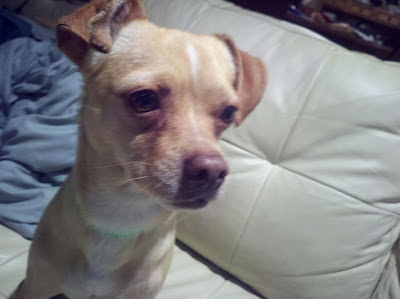 Winston is a 3 year old Chihuahua mix who just had FHO surgery. He will be recuperating at our house for the next four weeks. I am currently reading 1984 for book club so I named him after the main character. Big Brother is watching you, Winston!

We've only had him for 3 days, but he is already making himself quite at home! 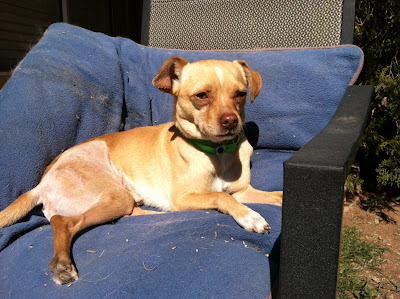 I love an easy foster, and Winston is certainly that. He is housetrained, he gets along with the dogs and he doesn't bark much. He does do this hilarious "talking" thing when you are eating and not giving him any of your food. I've never seen begging quite like it. He doesn't bark at you but he is very vocal. I'll have to try to get it on video. 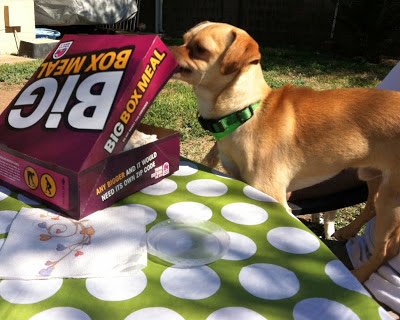 After we finished eating our super-healthy Taco Bell lunch with Winston chirping at us the whole time, Pat let Winston up on his lap. Winston immediately put his front paws on the table and pulled the Taco Bell box all the way to the edge of the table so he could scavenge for crumbs. It was so cute. He doesn't know Pat very well yet, or he would have known there would be no crumbs left over!

Updated a few days later:  I took Winston over to meet the Bacon Bits. He loved all the kids but he gravitated towards the youngest one. We were all sitting in a circle on the floor and he was scared of their cat. When the cat would come around, he'd run over to Maggie, who is 9, and hide in her lap. It was very cute.

Winston is also scared of my cat. For the first few days, he accepted Al but was nervous about it. As he was around Al more, he got more scared of him and started trying to run him off. Twice when I was watching hockey sitting on the couch with Winston in my lap and Al next to me, Winston tried to attack Al. The first time it happened, Al spooked and ran away. The second time it happened, Al wasn't phased at all (I love this cat - he is so awesome!) and just stayed put. You could almost hear him thinking "Oh, please, little chihuahua. I am so above fighting, but if it came down to it, I would kick your ass. So just simmer down now."  Poor Winston was now scared and mad so he upped the attack. Kitty still did nothing so I removed Winston to chill in his crate for awhile.

So, I guess we'll say good with children and bad with cats. :)

Updated March 18:  Winston passed his vet exam two weeks early (he's a good healer!) and went up for adoption. Sadly, TWO weekends have passed and Winston is still at the shelter. He is such a people-oriented little guy, I bet that he's just wilting there. I'm afraid that people aren't getting to see his true happy nature. If you know of anyone in the market for a little dog to live in a cat-free home, send them to the Arizona Humane Society Campus for Compassion. Poor little Winston.