I needed an easy foster after 3 months with Georgia and her pelvic fracture and resulting cage rest, so I took a 2 week kennel cough case. Paco is a chihuahua mix, mixed with something much bigger than a chihuahua. He weighed 18 pounds and only some of that was being overweight (which he was). 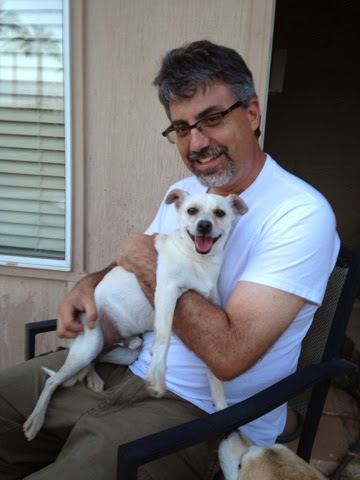 Paco was a shy dog and was slow to warm up. He was more comfortable with Pat than me, but he really wasn't interested in either of us. He liked the dogs right away, but he didn't settle in quickly. Despite his unsure state and aloofness, he was very polite and well-behaved. He spent his first few hours watching the dogs and not looking at us. He learned to drink from the pool after watching Frankie and Georgie do it. 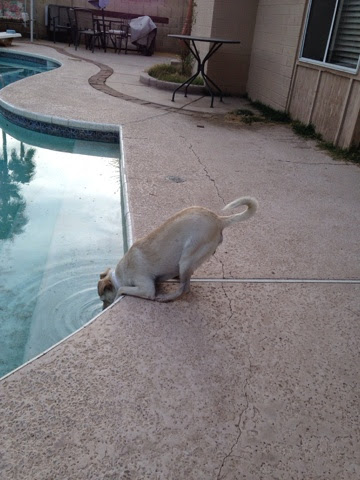 I read in his material that prior to needing a foster for kennel cough, he was on a behavior hold. He was hiding and growling in his kennel. They worked with him quite a bit but he remained aloof. They found that he did much better when other dogs were around.

After a day or two of ignoring us, Paco warmed right up and became a master cuddler. Once he felt secure, he liked us a lot. Taking a nap: 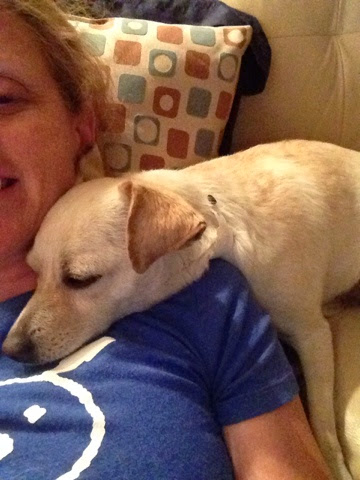 Paco got over his kennel cough in the 2 weeks and was taken back to be put up for adoption. 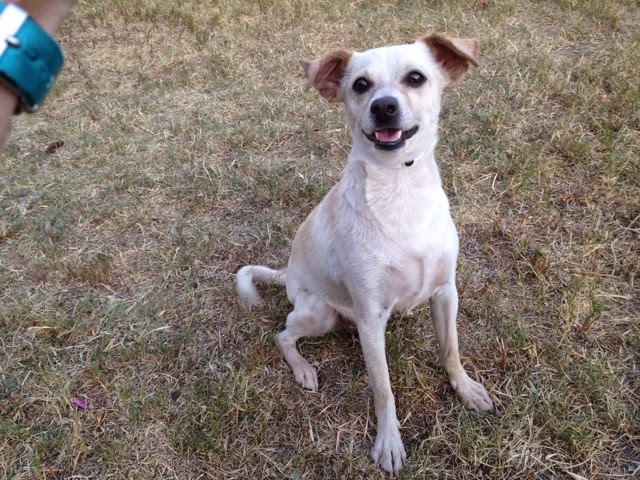 And there, he waited. And waited and waited. I knew he would be a hard adoption since he doesn't really like people until he has a chance to warm up. 15 minutes in a the get-to-know-you-area is not enough time for him to warm up. I networked him like crazy - posting him on my work classifieds, posting numerous times to my facebook page and having everyone share the post. I had a guy from our IT department say he saw the picture of Paco sleeping on my shoulder in his facebook news feed, posted by someone I don't even know! The word was out on what an awesome dog Paco was, but yet, no one was adopting him. :(  My heart was breaking every day that I checked the shelter website and saw poor little Paco's picture still there.

One of the attorneys at my firm shared the ad that I posted with his wife. He told me that his wife, a city attorney, was doing everything she could to find Paco a home. She emailed me a few times to ask his status. Finally, after 3 weeks of no adopters and poor Paco being sad and terrified at the shelter, I decided that if no one took him over Memorial Day weekend, I would just have to adopt him. He isn't the dog I want, but he is sweet, cuddly, and very very easy. On Friday I got an email from the attorney's wife saying that a friend was going to adopt him on Saturday ! Yet, on Saturday night, his picture was still on the website showing that he was available. They didn't take him. Very sad.  :(  But on Sunday I got an email from the attorney's wife's friend saying that they had gone and picked up Paco. He was currently staying with her but he was going to have a home with the family of one of her friends. He would have a mom and dad and 2 kids to play with. And, she said if for some reason it didn't work out, Paco would come back to live with her and so I did not have to have anymore sleepless nights worried about poor little Paco. Networking works! And now a co-worker's wife's friend's friend is the happy owner of poor little Paco! YAY!

I love this about you. Karissa

I am glad, things work as promised, and reaction times are excellent and consistent with the specifications of this high-quality organization Georgia Rehab