Mostly I want to tell you about Urban Dare, the race I didn't win but that I should get a medal for anyway since I did not kill my legally-bound spouse. However, I don't feel right telling you about this weekend's race when I have yet to do a recap of the race I ran...omg...it was a MONTH ago. Yikes.

Here goes. Let's see if I can remember it.

Christy and I wore the St. Pauli Girl outfits again because they really are the best race costumes ever. There weren't a whole lot of teams in costume, but apparently the German thing is popular these days. 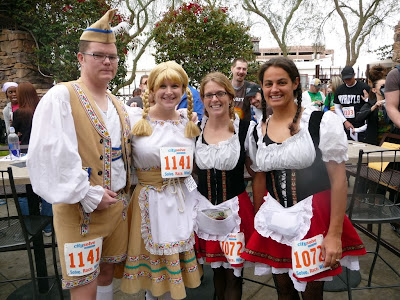 I know you can't drag your eyes away from Hansel's rockin' hat and his leiderhosen knee socks...but guess what this girl's name is? Did you guess Gretel? That's just her stage name, silly! Her real name is Necessity. Seriously. Hansel and Gretel, or Necessity and her really whipped boyfriend, won the costume contest. Even though our german girl outfits made their costumes less original...the boy was wearing knee socks! And a feathered cap! A well-deserved win, I'd say.

They gave us some clues. We solved them. We won. Ta da!!

What's that? You'd like me to elaborate because you so found this post doing a google search for "urban adventure race clues" and you want to learn from my experiences so you can win the CitySolve race in your city? Ok, fine.

There were 10 clues and 2 bonuses. You could skip 1 clue and the bonuses were optional. In my opinion, bonuses are not optional. If there is something to be gained, I'm doing it. This one was a 10 MINUTE BONUS for getting a pyramid with 10 people with any of the Phoenix mountains in the background. It was the first thing we did. It took maybe 5 minutes, so we had a net gain of 5. South Mountain is that low smudge between the head of Little Girl 1 (the one on my back) and Medium Girl 2's elbow. 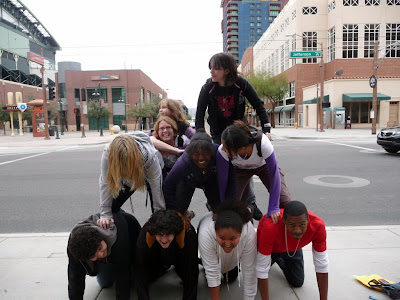 Luckily the clue didn't say it had to be a symmetrical pyramid! I did my best to get up there, but with Little Girl 1 on my back, I thought the safest option was just to stand on that poor boy's back. The picture got snapped on my way back down.

Then we were off to the races (hee, a pun!). Our first stop was the Matador. I think the clue read, "This is the restaurant that A Little Diamond's boss takes the department to whenever they are celebrating a birthday". Actually, it didn't say that, but the Matador is that restaurant for me. Since it was the start of the race, we were still talking to our internet support. 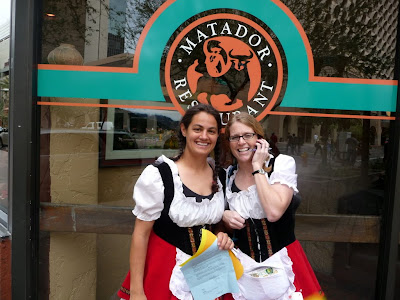 Internet support? YES! This is the key to the game, folks. So let me give a shout-out to Steven and my intern, Little Tom, for being great supporters. Especially Little Tom. Without Little Tom none of this would be possible. He is to google-searching and clue-solving what Tiger Woods is to golf and porn-stars. Ok...hopefully that and the lunch I bought him met his demands and he'll no longer think he should get some of the prize money.

While we were at Matador, we did the Detour clue. We had to choose between a picture of someone eating a burrito or take some pictures of burros (real or statues, horses count). This girl was a really good sport! 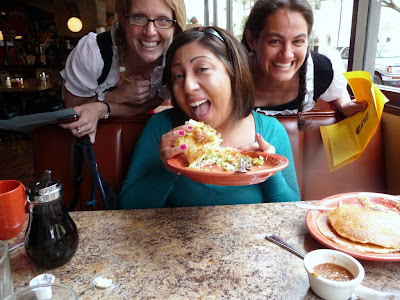 We then jumped on the light rail and headed north. Most of the clues were on the light rail. This is where I made our almost-fatal mistake. We got off the light rail after a few blocks to grab this picture (Flo was the Kiss My Grits gal and we needed a picture with her name at this landmark). 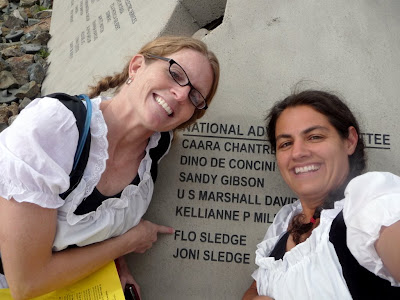 Getting off the train after a few blocks caused us to run a few MILES. Ergh. We should have taken the light rail all the way to our furthest point. I hate running!

Fusilli's .... a restaurant that shares a name with DNA-shaped pasta. I had no idea this place even existed. I wonder if it's good. Anyone been? 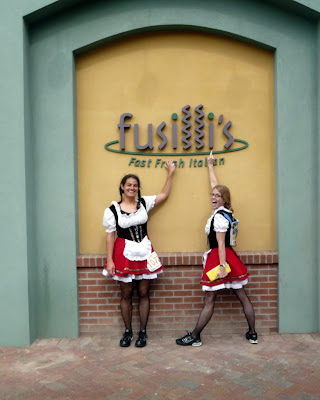 Then we stopped at One Yoga where we had to do a yoga routine. HOT yoga routine. We were already sweaty from the miles of running. Oy, it was hot. Doing yoga in St. Pauli Girl outfits was weird. Even the cutie-patootie instructor had a hard time keeping a straight face during it. 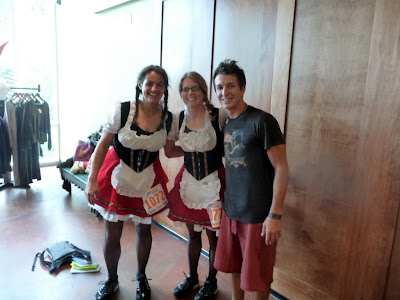 As we were leaving, we saw our arch-rivals, Wayne and Brent, getting off the light rail and heading toward the yoga studio. Frick! I knew that meant that they were gonna beat us. They had already done all the north stops and were on their way back. I was so down and beating myself up for getting off the stupid light rail where we did. Dumb, dumb, dumb!! And I was kind of down, because we still had more than a mile to run. I don't like running.

We thought we'd never get to Hula (what do these words have in common? Hoop. Dance. Dashboard Figurine). 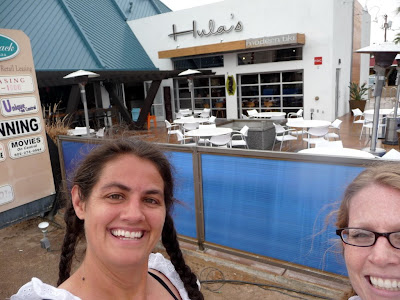 And we still had more than a mile to run! Running! In a race? Ergh!!

We had to cross the street and the light rail track (I always get into a NYC state of mind and think that I'm gonna get shocked if I touch the track) for our picture of Fez. The clue was "This restaurant shares a name with a That 70's Show character." I am so removed from pop culture, that even though I am quite familiar with Fez, I had to get the answer from Little Tom. 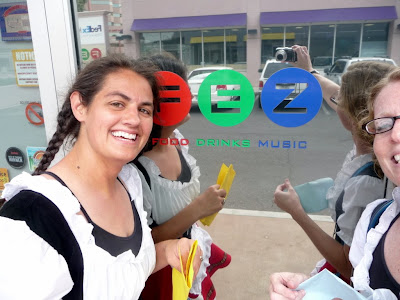 We still had to run even further north. We decided if a south-bound train came, we'd skip that northern-most clue. No train, so we ran all the way to Camelback Road for this picture. The clue was to unscramble SCAN REF. I get all wacky and confrazzled when solving the clues, so though I usually am a rockstar at word unscrambling and I am also familiar with Frances, I had to have Little Tom help with this one too. Thank you, Little Tom. 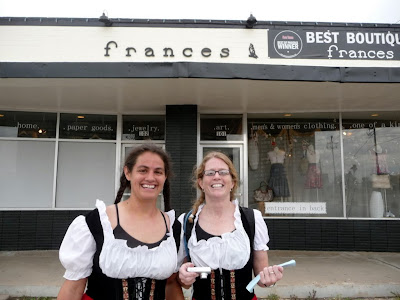 We were done with our furthest points. We had one more stop to make near the finish line and we'd be done. There was no way I was running back downtown, so we waited for the light rail. While we were waiting, we tried to put together another pyramid in case they didn't believe us that the smudge behind our original group really was South Mountain. This attempt was a huge failure. I don't think the lady with the camera in her hand understands that Row 2 needs to be shorter than Rows 3 and 4. That is Squaw Peak right above my head. 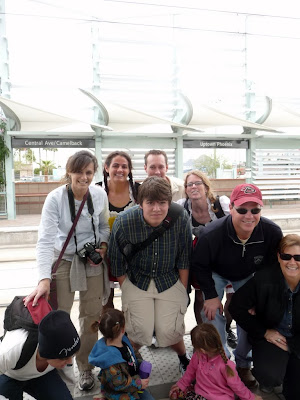 The train finally came. We rode it back the four miles we had run. We were on the lookout for people in local teams' sports jerseys. The second bonus was to take your picture with that person with the number showing. You got points off your time based on the number. 0-9 was 0 minutes off. 10-19 was 2 minutes off. 20-29 was 4 minutes off, etc. Because we do the bonuses first, we already had a man with a 22 for a 4 minute bonus, but we were on the lookout for anything higher. We didn't see anyone else.

We got off near the finish line and took our final picture at Carmine's Little Italy. This one involved solving a crossword puzzle. Again, the pop culture stumped me and Little Tom was brought in to solve "CSI NYC actor's first name, plural". This is pretty dumb of me because I already had Little and Italy and the clue said it was within a half mile of the start line. When Nicole was still working (before she switched teams and became...egads!...a parent!), we ate at this place once a week. You'd think I'd know the answer right away. I think the problem is that we call the restaurant simply "Pizza" or "The Pizza Place Below Paradise Bakery". 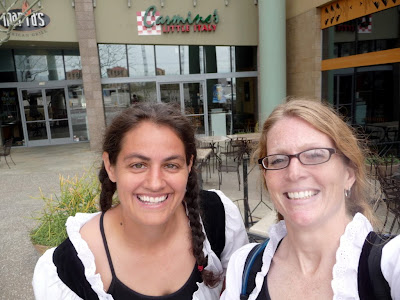 We were done...next stop the finish line. But wait! We were right across the street from the Suns Team Shop. Would it be worth the time to up our jersey number? There were no other teams around, but would they catch up to us if we took the extra time? We took the risk and earned 2 more minutes with the number 33. 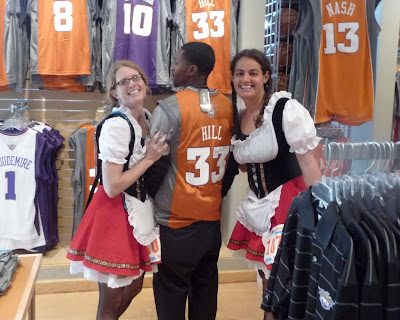 We beat the other team to the finish. But who did we NOT beat? You got it...arch-rivals, Wayne and Brent. Ergh. I KNEW I had messed us up with getting off the light rail for the Flo clue. ERGH! The boys were all atwitter wanting to know if we got the bonuses. Huh? Of course we got the bonuses. That's what you do first!! Or maybe you don't, because Wayne and Brent didn't get EITHER bonus. What?!

And that's how a bill becomes a law. Or that's how Storming the Castle came in second by 10 minutes but ended up winning the race.

That's a $300 check I'm holding, folks! Woo hoo - that covers all our entry fees for our races so far this year! 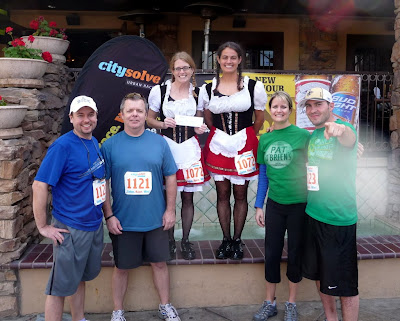 You are a race star. What happened to your regular phone support team?
It sounds like Little Tom out did them.