Oliver: The Next Top Model 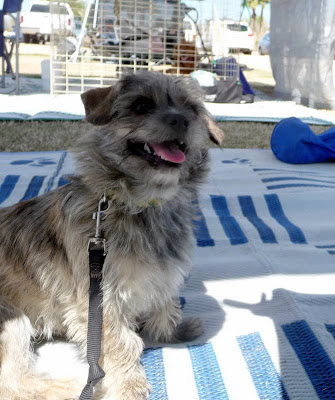 The Arizona Humane Society's Compassion with Fashion fundraiser is this weekend. Oliver is going to be a model and then be raffled off to a new family. I took him back to the shelter today. He was happy, happy, happy like he always is, until he realized that he was supposed to go one way (toward the kennels) and I was going the other way (back out the door). Then he planted his little feet and refused to walk any further and he gave me the sad, sad, sad face. :(

My volunteer duty at the fashion show is to be Oliver's handler. Yay! I get to see him again on Saturday.

He really is a cutie! And super-smart, too. One day I decided that I probably should get off my lazy bum and teach him to walk nicely on a leash. Jen, the wonderful dog walker, has been walking him with the other dogs, but he had never been walked alone. I put him on the leash, took him outside and made him sit. Treat. Walked 10 feet, did the same. Etc. By the time we had gone 4 or 5 houses away, the dog was walking in heel position and giving me automatic sits. WTF? Amazing! It wasn't a one-time occurrence either. He still heels like a pro on all our walks. What a super star!

Oliver loves stuffed toys. He likes to carry one around all the time. Then he likes to kill it. He used to "bury" it in the covers (meaning on top of the covers) but then he realized it was much more fun to tear the stuffing out instead! This was his very-favorite toy before he learned the joy of stuffing extraction: 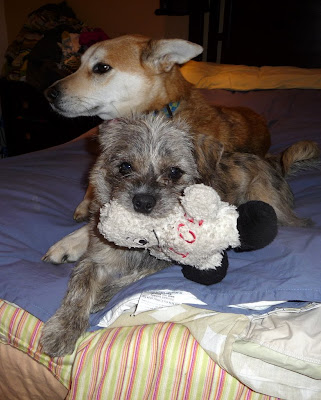 I took him to the agility trial a few weekends ago. He was starting to be skittish around guests at my house. This was bad and thus more socialization was in order. In true Oliver fashion, he was a super star at the show. He was hesitant for a few minutes, but by the end of the day was loving every stranger he met. 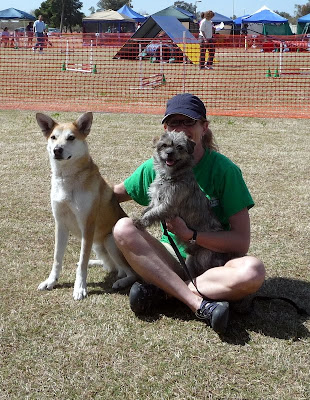 At the agility trial, I cleaned up in the Corgi Rescue raffle. I didn't win a corgi, but I did win 2 bags, a gift certificate for a facial, and the MOST coveted prize of all....A GIANT STUFFED HEDGEHOG! Woo Hoo!!!! 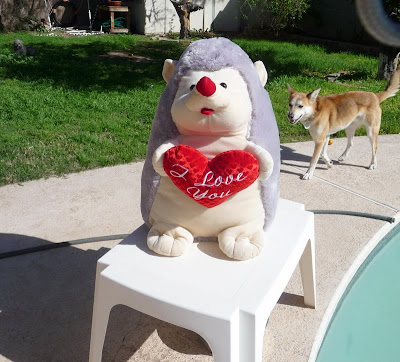 Oliver loved the hedgehog. Never mind that it was 4 times his size! He tugged and tugged til he got it where he wanted it. 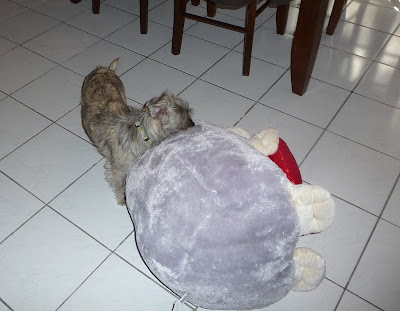 He tried to get it up on the bed, but since it weighs more than him, he was not successful. But he did keep trying and keep trying! Very persistent little guy! 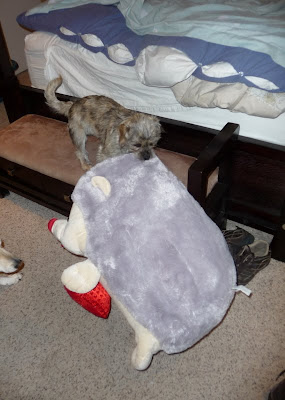 If there is not a stuffed toy around, Oliver will gladly substitute for slippers. I'll have to warn his new family of this tendency. I took this picture this morning, right before I abandoned him at the shelter. :( 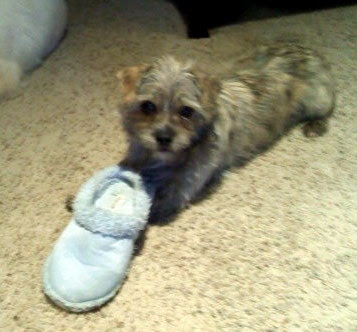 And in other news...I found a new type of food that Al seemed to really like. Then he threw up all over the bed. That was annoying. Also, Pat and I got into a teeny-tiny pre-cursor of a fight yesterday and he immediately threw out the "I don't get to have kids because of you" card. And it wasn't even a real fight! That was also annoying.
Posted by Diamond Girl at 11:02 PM