When Christy and I first talked about doing an urban adventure race gig, it was a given that we'd bring the race to St. Louis. My sister, Amy, lives in St. Louis. For a few years I've been telling her that we should do one of the races together. She was interested...but none of the races go to St. Louis! Wtf? So, MY race definitely would! And...it did!

From the very start of Twilight Town Treks, St. Louis was hoppin'. The minute I put our website up, we were getting hits from St. Louis. The only marketing we did was to post the race on various race calendars in our markets. Immediately, St. Louis made up 1/2 of our total webhits every day. We had teams register there before any teams registered here in Phoenix! And we KNOW people in Phoenix!! It was crazy.

I expected St. Louis would be great, and I was not at all surprised that the race was SO SUPER FUN!!

We had 38 teams register and 7 teams sign up at the event - a perfect amount of teams! The weather was really, really hot and really, really humid. There was a thunderstorm threatening at 5:30 when registration started. Luckily, it blew over and the weather behaved for the duration of the race. I was worried about my volunteers being out there in the rain all night. Rain is fun for racers, but not so much for people who have to stand out in it for 4 hours!

Let's talk about the race volunteers. Do these people look familiar to you? 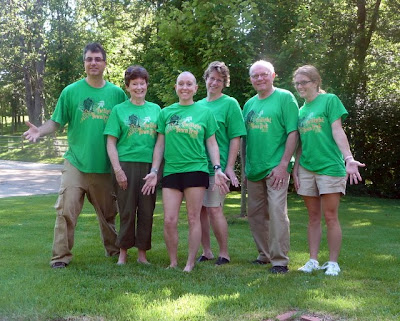 Yep, pretty much my whole family came to St. Louis to help! Pat flew in the day after we got there. Anne and my parents drove down from Springfield and Amy, of course, lives there. It was like a slumber party at her house that night! How cute does Amy look with her newly bald head? What a trooper she is...she had chemo on Thursday and on Saturday night she's staffing a checkpoint on my race for me. My family rocks!

And some more sisters: 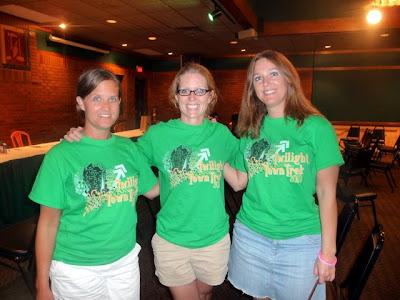 Yes, I was in a sorority and these are my sorority sisters. The girl on the left is my college roommate, Jill. The girl on the right is Kristen, a friend of Jill's and a DG who came around after I slacked out of the sorority. Luckily Jill forgave me for being a DG flake and we've remained friends for 15 years! These girls are awesome! 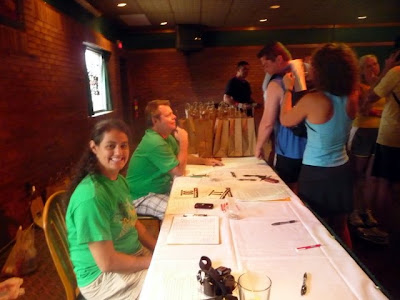 There is Christy...and who's that in the background? It's our friend, Wayne, who flew in from Phoenix to take a mini-vacation and help us with the race. So nice!

I am so lucky to have such great friends and family. Without them I know that the St. Louis race would not have been the HUGE success it was. And, a HUGE success it was!! All the racers were enthusiastic about being there. They all had a ton of fun on the race, despite the 95 degree, 95 percent humidity that night. It was so hot and sweaty that at the puzzle challenge, we actually had to pull one of the puzzles out of use because the pieces were so soggy from people's sweat that they were losing their shape. Ew. :) 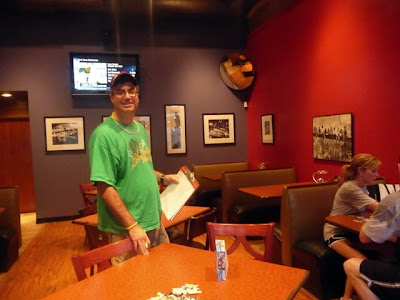 The Animal Protective Association was our charity recipient for the race and working with them was just as awesome as everything else in St. Louis. 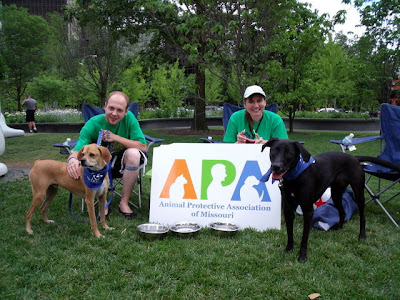 They were so eager to be a part of everything. They scoped out their location, they brought out their tent (but were asked to take it down by the park people), they even tried to bring their RV out for a better visual, but the parking was too difficult. I love them! The dogs they brought were Cooper and Lula. Lula is the black one. They were both sweet but Lula stole my heart. She did eventually get adopted, but sadly not by one of my racers. Last I checked Cooper was still waiting for a home (breaks my heart!!).

After the race, most of the racers stuck around the bar all night, talking about the race and making friends. It was incredible how good the mood was! Almost all of the teams told us how much fun they had and promised they'd be back next year. The facebook postings from the racers that night and the next day were all positive. One of my favorites: "This ranks up there as the funnest thing we have done as a couple." Some teams were even talking about road-tripping to Las Vegas to do our race there. I would love that! These people were so much fun! I can't wait to go back there again next year.
Posted by Diamond Girl at 10:25 PM