If you were a mama cat and you were looking for a safe place to have your kitties, would you choose my backyard? No, you WOULD NOT because you are smart and sane and you would probably remember this incident where you or your baby-daddy was almost killed by 3 mean dogs.

The mama cat who did choose to have her babies in my backyard is dumb, insane and has no memory.

One day last week, I noticed my dogs acting really weird near the shed. Weirder than usual, that is. My dogs love the shed because all the geckos hang out back there and taunt them. Every trip to the backyard involves at least 3 gecko-chasing trips to the back of the shed. But this day was different. The gecko-chasing involved a lot of frantic whining. That was new.

Being messy hoarders, we store a lot of crap behind the shed, such as green fencing, a piece of wood I'm going to use to eventually make a teeter and another piece of wood that used to be on the boat. This crap makes it so the dogs don't actually fit behind the shed on either side. This crap also made it difficult for me to see what the dogs were freaking out about. I had to climb the wall to see. 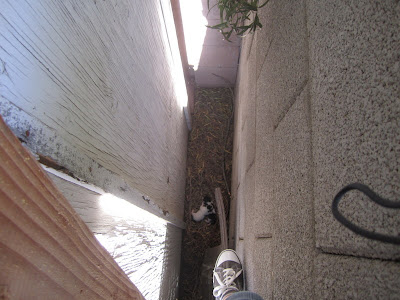 And this crap is what saved these little kittens from becoming a tasty doggie-snack. 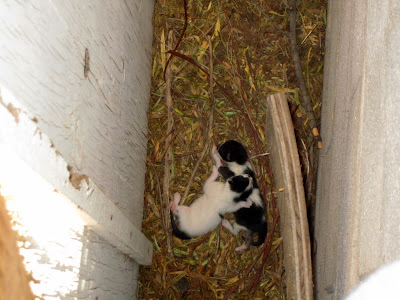 Cursing the stupid mama cat, Pat and I reinforced the entrances to the behind-the-shed-kitty-lair with some more crap we have lying around like pool gates and tree stumps. Everyday, ALL DAY, the dogs whine to be let out. Once let out, they run frantically from one side of the shed to the other, then back to the first side, then back to the other side, repeat ad nauseum, whining and crying the entire time. 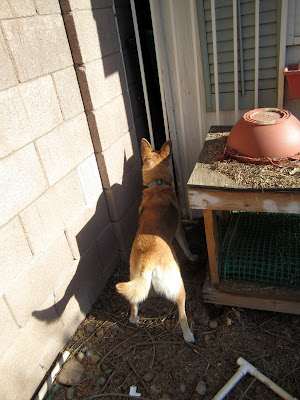 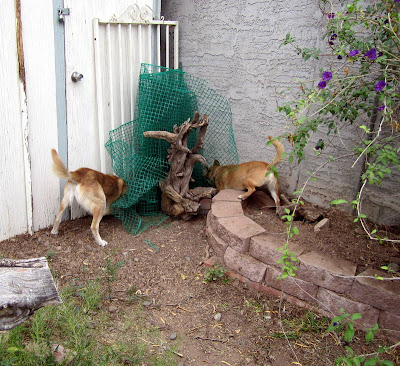 They are so crazed about these kittens that I have to lead them away by the collar to get them to remember to pee while they're outside. That is not an exaggeration! A few times I actually had to leash them up and take them for a walk to get them to pee! When the dogs are inside the house, every breath is a whine. They whine non-stop to get to go outside. They won't sit still to be brushed, they have stopped bugging me to feed them, they've stopped angling for treats, they've stopped asking for walks. They are 100% obsessed with these kittens. It is very, very annoying.

Please can we eat the kitties? 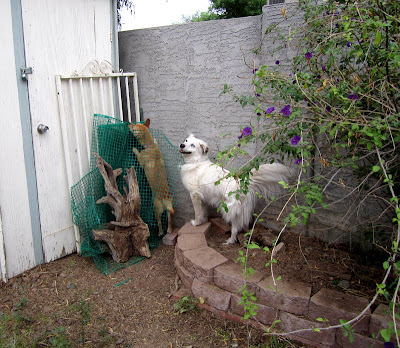 Yesterday, after a week of kitty madness, the dogs managed to move the pool gate just enough to squeeze by. When I noticed what was going on, Mo was past the gate and stuck in the green fencing. She couldn't go foward any further because of the wood. She couldn't go backward because the gate was in the way. She was completely stuck. I was very worried that she was going to panic and break another leg. I shooed Georgie out of the way to try to rescue Mo. I didn't know where Frankie was. I was freaking out. I moved the heavy stump, moved the heavy bricks, moved the heavy pool gate and then worked to extricate her from the green fencing....only to find that Frankie was stuck in the very same spot but underneath Mo! Oy! Finally I got both dogs safely out of their mess. And I decided the kittens had to go.

I got a box and filled it with soft shirts. I found a nice spot in the alley on the other side of the wall. Shady and hidden and just 3 feet from their original location. Isn't this a nice, lovely, SAFE spot? 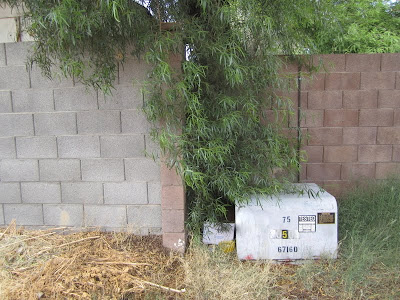 I thought skinny thoughts and squeezed between the shed and the wall and handed the kitties out to Pat. Here they are, little and tiny and fuzzy and cute: 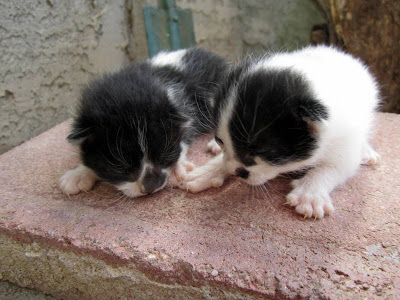 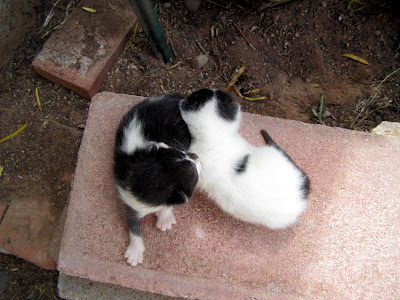 Happy and snuggly in their new home: 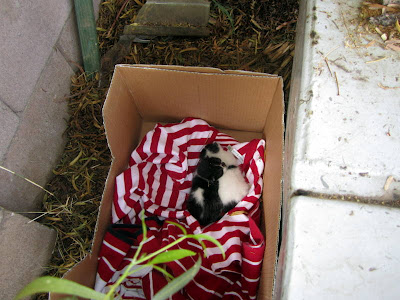 And I was happy that with the kittens gone, soon my dogs would go back to normal.

Until....a few hours later I went into the alley to check on the kittens in their box and....there was only ONE kitten in the box! I went into the backyard and looked behind the shed. Yep, mama cat and the black kitty were there. Frick. I gave up. I went and fetched the little white kitty and gave it back to mama behind the shed.

And Pat and I built the barriers back up. And the dogs remain insane. Ergh.
Posted by Diamond Girl at 2:26 PM

yeah, the mom will just keep on moving them back :) can christy foster them??? we just picked up a mom today or i would say we could try to take them...