Pick a pack of pickled PEPPERs

It is so overwhelming to think of the huge numbers of animals at the shelters. Right now, the Arizona Humane Society has about 300 cats and kittens up for adoption! 300! 75 of them aren't even on the adoption floor because there isn't enough space. And every day more and more kitties are turned in. And that's just the cats. The number of dogs is overwhelming too! I'm on a facebook group of the "5am Dogs", which is a daily photo list of the dogs that the county shelter put on their E-list for the next day. The point is to network these dogs to get rescues or adopters to pull them before their deadline (sadly, pun intended). Sometimes a dog gets rescued (check out Phillip Bruno) and we can all smile for a second, but mostly the dogs get put down at 5:00 am and a new list is issued. There are just too many animals and not enough adopters. It's heartbreaking.

While we are talking about shelter dogs, let's talk about breeds. The prevalent breeds of shelter dogs trend with current breed popularity. When I worked at the Humane Society 14 years ago, the majority of the dogs we saw were Chow mixes. Very rarely would we get any small dogs at all. For the past few years, the majority of the dogs have been pit bulls/pit mixes. While there are still tons of pits, lately the new prevalent breed at the shelter is Chihuahuas (and chihuahua mixes.) 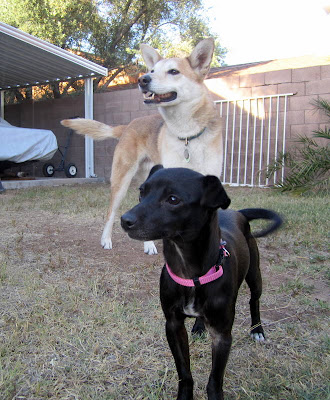 She is such a sweetie! Look at that tail, going 100 miles an hour like it always does. She is the waggiest little dog ever!

Her broken leg healed quickly and based on her x-rays, she was cleared for PUFA (shelter speak for Put Up For Adoption). However, she didn't recover from her bout of kennel cough very quickly at all so no PUFA for her. Many of my fosters get over kennel cough with no medication, but Pepper's persistent goose-impersonations would not go away so I had to get her some meds. The upside to no PUFA for Pepper was that we got to enjoy her for 10 extra days!

After her leg healed, Pepper became quite playful. She loves playing with the other dogs. Or trying to get them to play with her anyway! Her method of initiating play is to pick a big dog and jump up into his or her face. This method is rarely successful. 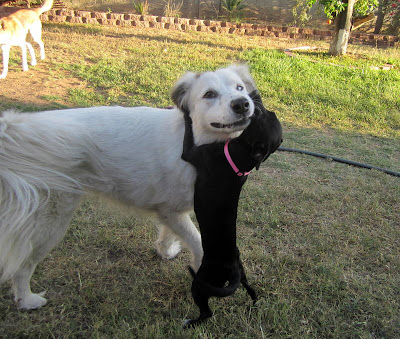 If Pepper's invitation to Mo fails, she'll try it on Frankie. 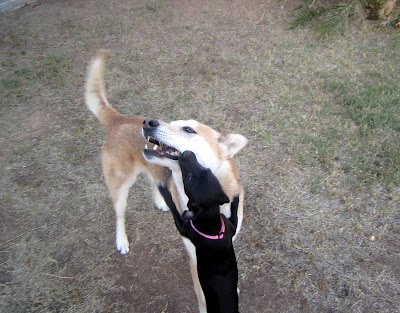 Every once in a while she gets lucky and Frankie will play with her. When he gives in and plays, she is so happy!

I think Pepper views Georgie as the alpha dog. She never jumps into Georgie's face! She does something even weirder. Georgie loves to wriggle around on her back in the grass like this: 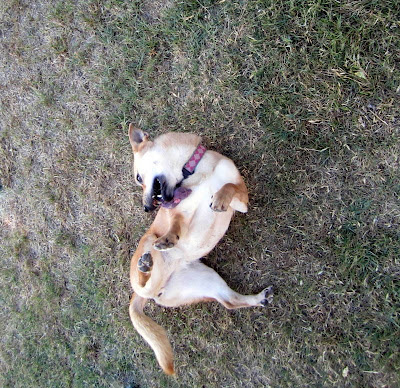 Whenever Georgie does this, Pepper goes running over to her and lays down and rolls onto her back too and shows Georgie her belly. She does this every time. It's pretty stinking cute. 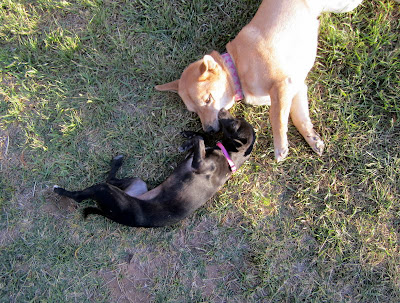 After her 10 days of medication, the kennel cough was gone and so I had to take poor Pepper back to the shelter. She was none too happy when I dropped her off there. And I was nervous because there are so many little dogs to choose from at the shelter right now and it breaks my heart when one of my pups has to spend nights all alone in a run. But such is the nature of fostering...you have to return them to the shelter so they can be adopted.

When I checked at 4:00 that afternoon, Pepper was listed up for adoption and her adoption info had some crazy remark that said "REQUIREMENT! Must meet other dogs and kids prior to going home." Huh? Pepper is absolutely lovely around other dogs, all dogs! And she was good with the Bacon Bits. On her info sheet I marked her as friendly with dogs, cats, men, women, kids. On her remarks about favorite toys I put "stuffed animals, bones and other dogs." Why would they make her sound non-dog friendly? I called the shelter staff immediately and they responded immediately and changed her adoption info. I love my shelter staff! And then, when I checked the website late, late that night...guess what?! Pepper was gone! Another foster adopted in ONE DAY! WOO HOO! YIPPEE!! Some very lucky family picked a pack of pickled Pepper and I'm sure they will enjoy her petite, pretty, playful Pepperness.
Posted by Diamond Girl at 10:33 PM

Jill, I'd like to read your thoughts on solving the root cause(s) of the homeless pet problem. Could you devote a post to that?