After doing two 5K obstacle runs and driving 125 miles, I took a quick shower and joined my team for the Arizona Treasure Hunt. The Treasure Hunt is for teams of up to 6 people to race around the desert (in a vehicle, as this is about brains not athleticism), at night, solving complex clues. Actually, the whole thing is pretty complex. They publish a rookie guide for first timers that is TWELVE pages long! Basically, there are 26 clues to 26 spots and you need to find as many as possible in 5 hours.

The clue locations are hidden out in desert areas so there was a bit of running around searching blindly. When you get to the clue location, you find something there to solve. It may be a visual clue, like this one: 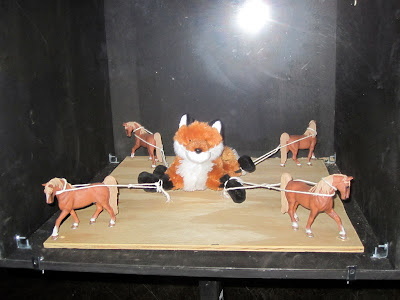 The bowling ball clue was solved with no problem. However, many of the others were a bit too vague for us. The one above? From looking at that you were supposed to get that the fox represented Guy Fawkes, which we got (from a hint about Remember, Remember the 5th of November, which has to do with the Gunpowder Plot in the 1600s in England). But from there you were supposed to figure out that the answer was "1606" which was the year he was killed. That's kind of a big of a leap don't you think?

We got through about 7 clues in the five hour time frame, which was good for 71st out of 78 teams. We didn't get last place!!

Team Everything is Better With Bacon: 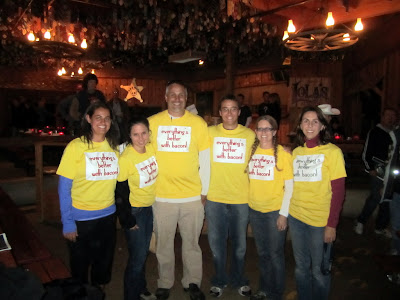 Ian and Kiri were our top solvers, followed closely by NFBF and Irene. Irene was our best clue location finder, just as she is in our adventure races. Christy was the driver, so she was a very valuable team player. And me? Um...I held the opened clue envelopes. And I brought snacks.

Despite our very poor finish, we are ready to try again next year! We are trying to crack the top 60!

A Busy Day, continued
And then....after two 5K obstacle courses, one 5-hour treasure hunt, a steak dinner at midnight, 180 miles driven and getting home at 1:30 a.m., I got up at 5:30 a.m. on Sunday to host/work a work event. The work event was our firm participating in a 5K, this one without obstacles. I ran it, took 3rd for my age group and got a new PR! Being well-rested to do your best is a myth. :)

Just a note on that age group thing...this 5K was a fundraising race to support pancreatic cancer research. It takes place on the same day as the New Times 10K and the Women's Half Marathon, so all the real runners were participating in real events that day.
Posted by Diamond Girl at 6:01 PM

Girl friend, wish I could bottle your energy!

Who's the guy third from the left in the photo?