Hello there, reader. Allow me to introduce you to Peanut who is the current star of my foster rotation. This is Peanut: 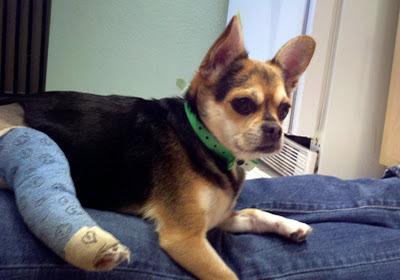 Peanut is a 5 year old pug/chihuahua mix, which I'm sure you could have guessed by looking at him. I don't know how he manages to be squishy-faced like a pug and pointy-faced like a chihuahua all at once, but he does!

Peanut was found as a stray. He had a collar and tag on, but the tag information was a dead end. Boo.

When he was found, he was not putting any weight on his back leg. It turns out that he was suffering from a luxating patella, which is a fancy way of saying "dislocated kneecap". And I bet you assumed from the cast that he was just another dime-a-dozen broken legged foster. Oh, no! Peanut is much too fancy for the ordinary broken leg.

When Peanut arrived at Casa de Pequeno Diamante, he was muy gordo. A little fattie, if you will. I don't allow fat dogs, so his 10 pounds was brought down to a much better 8.7 pounds. 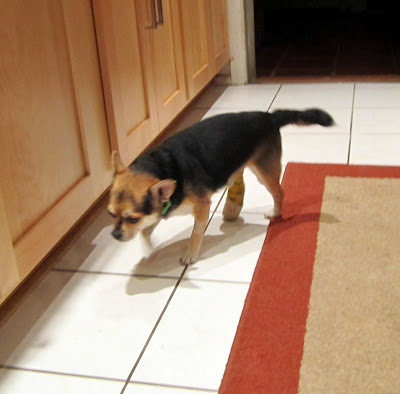 He was on cage rest for the first four weeks, which means that if he wasn't in his crate or x-pen, he was in my lap. When in his ex-pen, he is a huge complainer! Bark, bark, bark! When in my lap, he is content as can be. 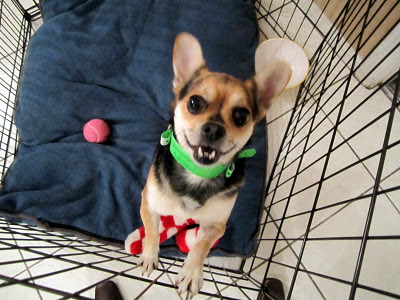 Now that he has been cleared for freedom to roam the house and walk around like a regular dog, I understand why he was so fat. He is a PIG. He wants to eat constantly. He starts demanding his dinner two hours before it's time to eat. He'll scratch at the door that leads to the dog food until I physically have to remove him. When we are in the bedroom, he tries to get my attention and have me follow him out to the kitchen. He wakes up at 6:00 am every day, barking like a fiend. I figured it was because he really had to pee, but I know now that he was saying "GET UP AND FEED ME NOW!" Apparently his original owners allowed themselves to be bossed around by a little peanut. Not me! He will remain svelte for the duration of his stay and his records for his new owner will recommend watching his weight to help keep his knees healthy.

He will occasionally play with toys. 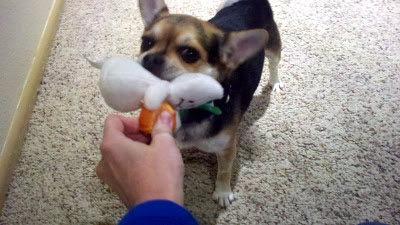 But mostly he wants to cuddle or eat.

During his cage-rest period, I would put him on my lap while I worked on the computer. He always tried to get in the way, just like a cat. Finally, I gave up fighting with him and I let him crawl up onto the desk. And he promptly plopped down like the table was the comfiest dog bed ever. This is his favorite spot now. 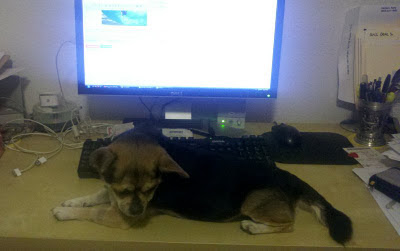 As a matter of fact, he is right there, right now. His head is on my wrist and his butt is tucked up against my other wrist and he is snoring as loudly as a true pug. What a silly little doggie!

He also likes to burrow in the covers. He's kind of lazy about it, so you have to lift the blanket up for him and then he'll crawl in. I make him a fort out of the extra pillows when I take a nap. He'll crawl right in and take his nap. One day he was burrowing in the pillows and he managed to crawl into the pillowcase and he wouldn't come out. I had to turn the pillow upside down and dump him out. He was not very happy by that turn of events!

He will go up for adoption this week. He has lots of good traits (housetrained, crate-trained, wonderful with cats, tolerates dogs, extremely affectionate [i.e. needy], a great cuddler, he doesn't shed, which is odd but true) so hopefully he will go quick. His one bad trait (barking like crazy when he is crated and you are present) may not do him any favors though, as he will be in a kennel with adopters on the other side who may not appreciate him yelling at them. One of my co-workers has a potential home for him, so that would be ideal. The less time in the shelter, the better. This dog likes his companionship!!
Posted by Diamond Girl at 7:27 PM