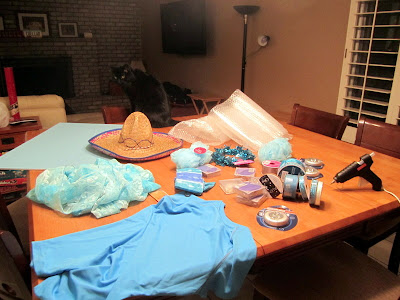 Start out with the above items. From the back: Cat, foam board, sombrero, bubble wrap, ugly shirt from Ross in size 20, shower poufs, sparkly wire decor stuff, blue tie-dye tights from the kids' department at Target, lots of ribbon, 3 battery powered tap lights from Home Depot, 6 sets of LED battery operated light strands bought from Amazon and express-shipped, a blue running shirt and a hot glue gun. Nothing can be done without a hot glue gun! Then, go to Walmart for more bubble wrap, more shower poufs and a boat-load of AA batteries. $80 later, you are set with the necessary supplies.  Ok, the cat isn't really a necessary supply but nothing gets created in this household without his "assistance". 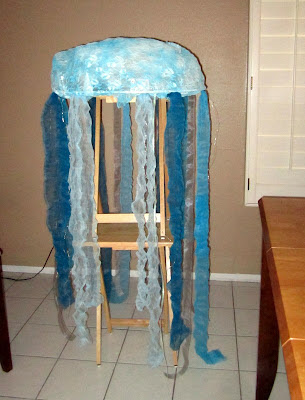 Step Three:
Decide it's not obnoxious enough and add more ribbon and more sparkly wire decor things. Put on the tie-dyed tights and the blue shirt. Realize you are going to be really cold because it's 50 degrees out and getting colder. Add a blue sweatshirt. Put the 5 pound monstrosity on your head. Keep your head tilted slightly to make up for the off-center hole in the base.

Ta Da! You are a jellyfish! 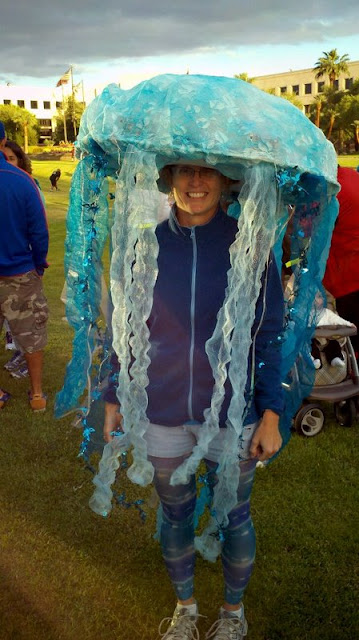 Step Four:
Show up at the 2012 Firefly Run with your awesome and supportive friends. Tap the three lights on the top and flip the 6 switches on the base for the LED strings so that you glow. It would be good if you remember to keep your head tilted so your costume doesn't tilt. 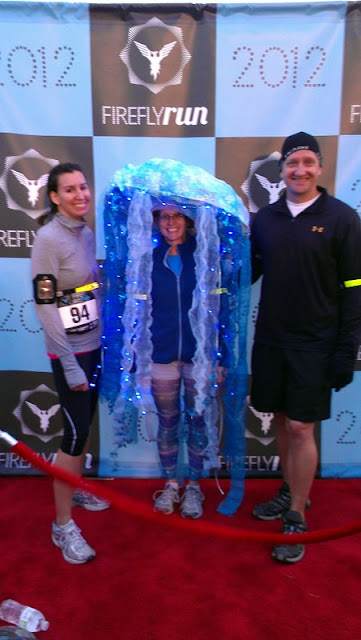 Wander around the area so that everyone can see you. At this point you will also get the opportunity to pose for about a thousand pictures with strangers because they all think your costume is so awesome!

Step Five:
Walk around the finish line/party area some more. Take more photos. Then supply your awesome and supportive friends with cowbells. 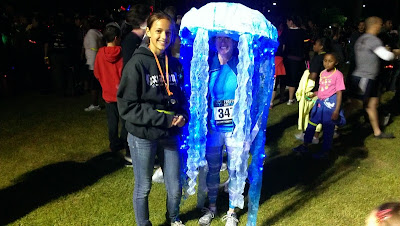 Step Six:
Enter the Costume Contest. Make your friends cheer loudly and shake the cowbells rowdily during the audience voting portion. (Side note - the rules on the Firefly Run website specifically state that you do NOT have to run in your costume. Otherwise, I would have sucked it up and tilted my head while precariously balancing that jellyfish for the full 3.1.) 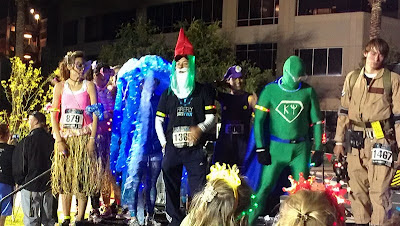 Step Seven:
After a tense moment when it comes down to you and the guy with the awesome, but a little too realistic Ghostbusters costume, win the costume contest! Claim the prize - a new generation iPad! Woo hoo! 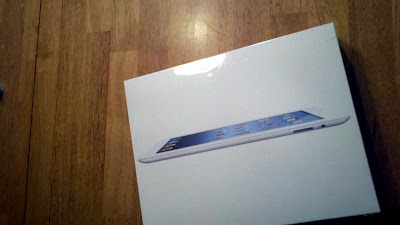 Step Eight:
Play with the iPad all day on Sunday and then realize that it really isn't what you want, because you'd really rather have a laptop with a keyboard. Decide to sell it. Box it back up. Advertise the iPad on your work classifieds for $450, $49 plus tax less that what they are selling for at Target and Best Buy. Collect your cash.

And for reading this far, I'll give you a bonus story of a very sore loser. This lady was dressed as a fish bowl. I went up to her before the race and made a joke about how we belong together. She just looked at me. I explained that I was just joking because I was a fish and she was a fish bowl...get it? She turned and walked away. Okay...  After the costume contest (in which she didn't even make the audience-selected Top 4), she came up to me. I thought she was going to congratulate me, cuz, you know, I'm really awesome and all! Brian had us pose for this picture before she started the conversation. Note the forced half-ass smile. 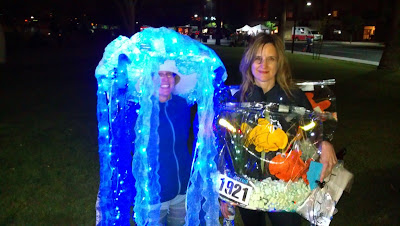 She said, "Can I ask you how you came up with your costume idea?"  I answered, "I thought of things that glow or light up and I thought a jellyfish would be cute. Then I looked online for jellyfish costumes, thinking I was really clever. Turns out there are a bunch of jellyfish costume pictures online! Who knew?! One site even had directions." Smile. She didn't return the smile. She said in a quite accusatory tone, "It's just that last year's winner was a jellyfish." Me, confused: "There was a Firefly Run last year?" Sore Loser: "It was in a different city." This was said over her shoulder as she was walking away.  Wow. She must really have wanted the iPad.
Posted by Diamond Girl at 10:04 PM

Such a small world; the half-ass smiler is my friend Cheryl. But you're right :)

ooooo, ahhhhh, pretty, pretty lights.... you are so darn clever and quite the financial wizard.