Two Crappy Races and A Flight to Australia

I noticed that CitySolve started at 12:00 and Challenge Nation started at 1:00, with start locations just a few blocks apart. Christy and I were already registered to do CitySolve but I thought it might be a fun challenge to try to do two races simultaneously! We've never tried that before. Has anyone? So, we signed up for both!

Our focus was going to be on CitySolve since we were trying to redeem our second place loss last year and reclaim our first place spot from 2 years ago. If we happened to be in the area at the start time of Challenge Nation, we'd pick up that clue sheet and work it too. If nothing else, we'd get to do two costume contests with our awesome new costumes! The kicker to all this is that we'd have to be done with both races by 4:00 because we had to be at the airport for a 5:30 flight to LAX, en route to Australia! Two races and a flight to Australia all in a 5.5 hour time period. :)

I don't want to hear that we are crazy. I already know this. You're thinking that we're crazy just on the premise of this post. Wait until you read the end of this story where I'm standing on a bench screaming in anger trying to incite a riot. (Not an exaggeration.) Then we can talk about crazy!

All packed for Australia, we headed downtown and checked in for CitySolve. The costume contest was first. We had fierce competition from the Wizard of Oz gang (the Dorothy even had on red sequined shoes that she was going to wear for the race! Love it!) but in the end our funny pun won! Woo hoo! Not even noon and we were one for one! 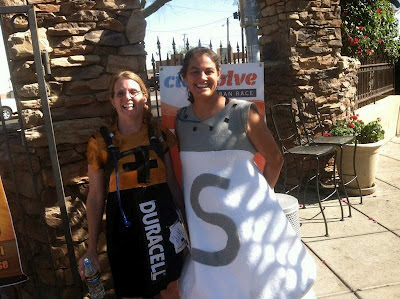 (We are standing on the wrong side of each other. Oops.
Battery and Assault doesn't make as much sense.)

CitySolve starts their races with a trivia question. They hold up a huge sign with the question and answers that direct you to various street corners in the area. The correct answer gets you to the corner where the clues are handed out. Our question was something like "Which state shares the longest border with Arizona?"   I read the question quickly, decided the answer was C, 1st Street and Jefferson. We took off running and a few of our friends were headed the same way, which was encouraging. When we arrived at the street corner, ahead of most of the teams, there was no clue-hander-outer there. We crossed the street to see if she was hiding in the doorway of a restaurant. Nope, no clue-hander-outer. A group of us conferred and we all felt the answer we chose was correct, but no one took a picture of the question so perhaps we read it wrong? It appeared we were all wrong, so we'd better try something else. We headed to one of the other corners listed . No one there. We went to all four corners listed on the trivia sign and no clue-hander-outers at any of the corners. WTF?!  After more than 15 minutes running all over downtown, we headed back to our original street corner...and there was the clue-hander-outer! She had been told to go to the wrong street corner! UGH!

They fixed the mistake and got her in the right place in time for the later arriving teams to get their clues, but us faster teams were already gone by the time she got there. This meant that many teams had at least a 10 minute head start on us. Teams were already done solving their clues by the time we got ours. We started solving the clues, but realized when you win races by minutes or even seconds (we lost Scavenger Dash this year by 13 SECONDS, remember!), ten minutes is a huge disadvantage. We also realized that there was no way to make the outcome fair, as they weren't able to track what time each team actually received their clues.  In frustration, we decided to write off CitySolve this year and just do ChallengeNation and maybe we could still cash in on a prize.

Knowing what it takes to produce these races, we felt terrible for Mitch and the CitySolve crew. One tiny error makes for a big issue. I don't know how they ended up scoring the race but I hope people weren't too angry.

After our initial excitement of winning the Costume Contest, we were now just feeling frustrated. And that ends Crappy Race #1. Stayed tuned for Crappy Race #2.
Posted by Diamond Girl at 11:53 PM