Two Crappy Races and A Flight to Australia (continued)

The street corner where we got our CitySolve clues was, in a bad judgement call on CS's part, also the corner of the restaurant that was the start location for Challenge Nation. A bit confusing because many CN racers saw people with clues and thought they were late or that they missed something. We helped sort out some of the confusion and went upstairs to the plaza where the CN race was to start.

The Challenge Nation staff asked one person from each team to stand in a big circle with one hand out. There were a zillion teams so the circle was larger than the area that the sound of their megaphone could reach, causing some teams to miss the announcements. Something to work on, but overall the process worked. Everyone had to remain in the circle until all teams had clues. 1, 2, 3, go! After our first clue fiasco, this seemed like a really fair way to do it. 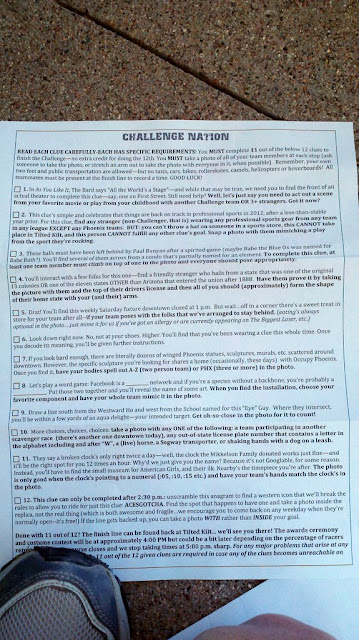 Many of the clues we already knew from previous races and just general knowledge. A lot of them were scavenger type, find-a-stranger clues. John from the Avenging Narwhals in Seattle and Kiri were our clue solvers. A few of the clues were tricky, including #6, which we never solved. That was a shame because we really wanted to skip #12. It didn't even open until 2:30 and we hoped to be finished with the race by that time!

The clue instructions were fun. You really had to read the clues. For example, you had to find a stranger from a specific state, have them show their drivers license in a photo with you while all of you formed the shape of their state with your arms. Can you tell this is Washington? :) 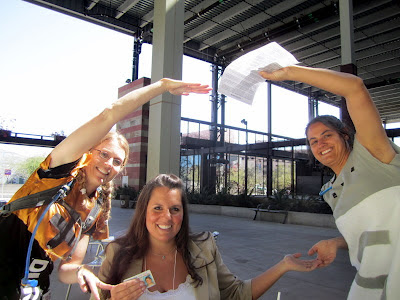 The specifics of this clue were that you had to take a picture when the minute hand was at a 5 minute increment and you had to mimic the arms of the clock. I guess I think that clock arms should be bent. 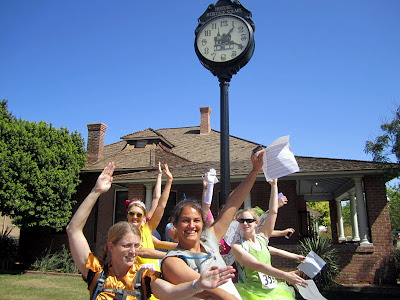 We didn't run our best race. We backtracked quite a few times, and twice went within a half block of #12, Wells Fargo, the clue that didn't open until 2:30. We never did solve #6 so we had to use that as our skip. We were annoyed that we'd have to backtrack yet again to go back to Wells Fargo after 2:30. Despite all that, we were enjoying this race. We liked the clue format which almost made up for the fact that there were no actual challenges. (You would think that a race named "Challenge Nation" would include some challenges and not just photos.)

We weren't in full-on race mode because we had time to kill before we could complete #12 at 2:30. We somewhat leisurely finished the rest of the clues. We got to Wells Fargo at 2:27 and, with a HUGE group of other teams, waited until 2:30 to take our picture. The staff there said that people had been coming in there for the past hour taking pictures and they were letting them. Seriously? What a bunch of morons who couldn't read the rules. The clue specifically stated, IN BOLD, "this clue can only be completed after 2:30." To make sure we didn't get a penalty like all those early teams were going to get, we made sure the time on our phone was visible in the picture. See? 2:30! 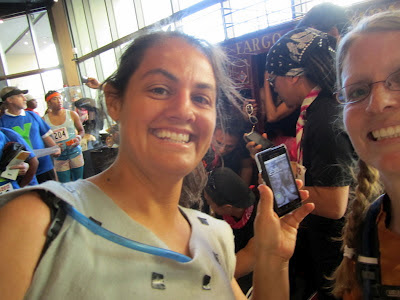 We hauled ass back to the finish line. I ran so fast I almost puked. We were the first team there from the 2:30 Wells Fargo group! The only teams that could have beat us were those who had figured out #6. We were optimistic for a high placement! We checked in and were told we were the 17th team to arrive. 17th?!? No way!

As we were getting our photos checked, I asked the photo checker about the penalty for those people who came in before us and used Wells Fargo as one of their 11 completed clues. He had no idea what I was talking about. They hadn't been giving penalties to those teams. I started to get a little angry. The clue specifically stated AFTER 2:30. The volunteer wisely took us over to the race director. This is where things quickly went downhill.

We presented the problem to the race director. Race Director: "Oh, that was supposed to say 1:30. I copied/pasted from a previous clue set and must not have changed it."  Nope, that excuse isn't good enough! The clue sheets say 2:30 so teams should be penalized for not following the actual written rules, instead of abiding by your intended rules. Race Director: "Well, there isn't anything I can do about it now."  Yes, yes there is. You can re-check the photos of the 16 teams who arrived before us and assess the accurate penalty. Race Director: "No, I can't do that. There is nothing I can do."

At this point, I'm starting to get a lot angry. He keeps trying to brush us off. The finish line area is starting to get really crowded with other teams arriving from Wells Fargo. I keep pushing my point, because I'M RIGHT and he is WRONG. (See? Getting angry.)

Race Director: "Well, I can assure you of one thing. I PERSONALLY checked in the top 5 money-winning teams and they all did #6 and skipped Wells Fargo."

Oh, okay. I can accept that. I'm starting to calm down. That is fair. We didn't win the money. They were smarter than us. Okay.  We proceeded to photo check and accrued no penalties so we stayed in 17th place. The top 25 teams qualify for nationals so they asked us for our email address and phone numbers.

I was still a little worked up from our altercation and decided to do a little research. We went into the bar and started asking around for the teams that came in the Top 5. As we found them, I asked each of them if they skipped Wells Fargo or if they skipped a different clue. We found 3 of the top 5 AND ALL OF THEM SAID THEY WENT TO WELLS FARGO!

This went on for a little bit longer until Christy and I couldn't handle it anymore and he was on the verge of physically escorting us from the building.

As we were passing by the photo check area, which had a long line of teams just arriving, I got up on a bench. I started screaming. "For all of you who just got here from Wells Fargo! They are accepting Wells Fargo pictures from before 2:30! They refuse to fix this!"  Probably not one of my finer moments, but at least I didn't lie to a paying customer! A paying customer with a really loud voice! The people who heard me started to get pissed off too. I don't know what happened after that because we left.

We left. To Australia!  In the airport: 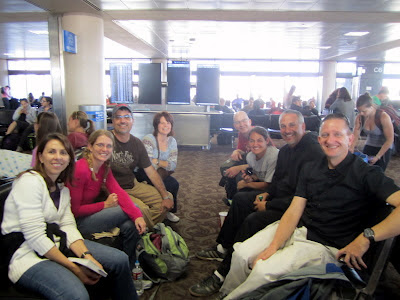 Every time we had access to wi-fi in Australia, I was on Challenge Nation's facebook page either telling the race director that lying is bad business (in my angrier moments) or offering solutions on how they could make it right (in my friendlier moments). Every post was deleted and I was finally removed from their page. I saw a few other posts along the same lines before they were deleted too.

The ironic end to this story is that CN emailed everyone a week later with this:

There were some irregularities with the finish results in our Phoenix race this year, which we have worked throughout this week to address in a fair manner.  In 50 races that we have conducted, we've never had to do this much follow-up, so please accept our apologies for the delay in resolution. However, getting the finish places and times correct is very important to us.

The fundamental issue is that despite the clue clearly indicating that the Wells Fargo History Museum clue was not to be conducted prior to 2:30 p.m., it is apparent that some teams broke that requirement and took that photo prior to 2:30 p.m.  Subsequently, these teams were able to record a finish time that was incorrect, because of our error in fully verifying the photo time for that clue and disqualifying those teams at that point.

They went on to ask everyone to resubmit their pictures so they could verify the actual winning teams. Oh my god. If he had just listened to me that day, none of this would have been an issue. He literally had the top 16 teams' phone numbers in front of him. Those teams all had finished within the past half hour. All he had to do was ask them to come back to photo check. A ten minute fix. Instead, he thought lying to me would be a better option.

After all was said and done, we finished 6th. Which very conveniently puts the trouble-causing team one place out of the money prizes. Who's with me on screaming conspiracy on this one?  :)

I have half a mind to enter the Nationals just to scream at him some more.  But I won't because I won't be giving him another dime.
Posted by Diamond Girl at 11:53 PM

I hope you come back to CitySolve Urban Race. We miss you.

Of course we'll be back for the next CitySolve!

So, we raced Challenge Nation in San Diego the day after your race. Here is our clue number 6, paraphrased because I can't find the sheet, "Look down, no not at your shoes, a little higher. Now reach out and touch someone to find the rest of the clue." We did not solve this clue either.

And here is that clue in Los Angeles, "Did you know you were wearing a clue this whole time? Find the ten coded digits on your body and ring them up to hear your next Challenge."

You had bad luck with Challenge Nation too, huh? We won the online photo contest from back in August, and they've igrnored and even erased every comment we've left them asking when they will announce the winners and give out the $50 prize! Still NOTHING! What a joke of a company.