I would like to introduce you to the Mighty Quinn. 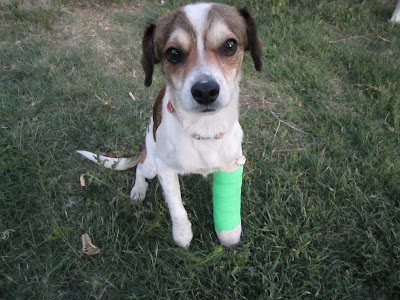 How cute is that face?!

The Mighty Quinn is an adorable, teeny, tiny, insecure little beagle with, you guessed it, a broken leg. To give you a perspective of how little this beagle is, here he is next to Frankie. 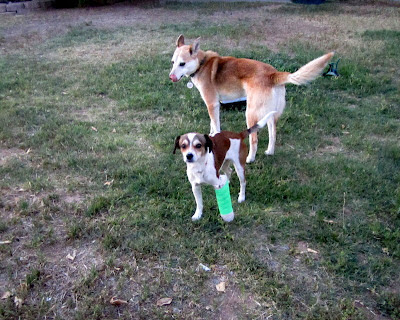 We named him Mighty Quinn in an effort to give him some confidence. That plus a ton of love and a constant routine have helped him out a bit. He's still a little bit insecure but he's no longer quivery. He really wants to please you, but he isn't always sure want you want.

As he's getting comfortable at our house, he is showing his true personality. His true personality is a little quirky. Quirky Quinn. For example, he's great in his crate. No crying or whining when you leave for the day or when you put him to bed. It's when you come back for him that he gets upset. He starts barking and crying and freaking out. It's as if he's saying "I can't believe you left me alone! And I WAS ALONE! All by myself! And it was terrible. TERRIBLE! Ahhhhh!" It takes him about 5 minutes to settle down when you let him out of the crate.

More quirkiness... He loves strangers and wants them all to be his friend. When people come over, he gets uncontrollably wiggly and wants to get in the visitor's lap. He's happy as can be to be loved on by any and every person. I have a few friends, however, who don't enjoy wiggly little dogs in their laps. As we sit on the couch (watching Coyotes playoff hockey. Woo hoo! Go Coyotes!), he'll try for a long time to weasel his way over to them. When he finally figures out that they don't want to be his BFF, he gets pissed. He instantly switches from happy, wiggly "I-love-you"s to growly, barking "I-hate-you"s. He looks right at the unwilling non-friend and speaks his mind. If his barks could be translated, his sentiments wouldn't be fit for print on my blog.

His other habit, which is more annoying than it is quirky, is to wake up at 5:45 every morning. 5:45 am! And by "wake up", I mean he starts scream-barking at 5:45 am. "HEY! I'm alone! ALONE! Come get me now! NOW!"  If he was my dog, I would let him bark it out to teach him that 5:45 is not an acceptable time for scream-barking (as if there is any acceptable time for scream-barking). Since he is a temporary dog, it's easier to just deal with it. I deal with it by putting him back to bed 15 minutes later, after letting him out to pee and feeding him, so I can sleep for another 30 minutes. And true to his quirky nature, he goes right back in his crate quiet as can be...until I let him out again.

In the past 5 weeks, he's been in for some splint changes. Purple: 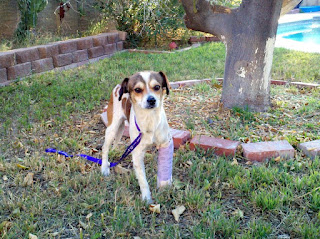 At his second appointment they said he was doing great and the bone was healing well. Yay! I rock as a foster mom! Blue splint: 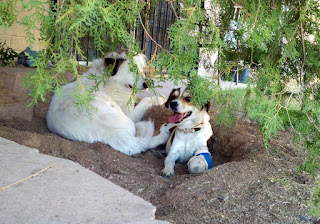 At his vet third appointment he was neutered and got his back dewclaws removed. They did another x-ray on the bone and found that it wasn't doing so well this time. Boo. I suck as a foster mom. They took his splint off anyway, in hopes that the bone would heal itself if it were more free. No splint, but bandages on the back paws: 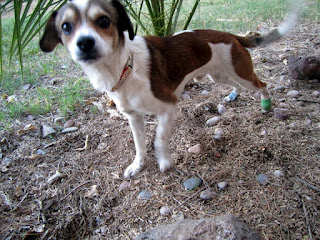 Since he doesn't have a splint to protect the bone, he is now on Super-Strict Cage Rest.  He only gets to walk for about a minute a day during potty breaks. I carry him all over the house and I move a crate all over the house so he can be caged wherever I am. He's getting a little stir crazy. He goes back for a check-up at the end of this week. Hopefully his restrictions will be lifted because he really needs to be leash-trained!

Before the splint came off, I let him wander around the backyard at potty time. I initially tried taking him out on leash, but it was obvious he'd never been on one before. When he hits the end of it, he gets scared and freezes. He lays down and won't move again until I pick him up. Now that he's on Super-Strict Cage Rest, he only gets to go out on a leash. Luckily, since he had previously gotten used to our routine of potty breaks, he does his business as soon as I set him on the ground (what a good dog!). We don't run into the leash problem as often. But when I'm not quick enough to keep the slack when he's walking, he still freezes when he hits the end of the line. A couple of real walks with the the other dogs is all it will take to get him used to the leash, but that will have to wait until he is cleared for exercise. Here's hoping for a good vet visit this week!
Posted by Diamond Girl at 11:51 PM