Cahoots Duo Challenge, April 28, Buckeye AZ
What makes it different: The race is for teams of two. From their website: "All Cahoots courses have been specifically and creatively designed to prove the resolve and test the limits of even the toughest of twosomes. You'll carry, push, pull and roll one another over and through a variety of perils and hazards. You'll swing over energy sapping bogs on the Siamese Trapese, build precarious bridges, and scale 10' walls."
Did it live up to its marketing:  Not really. There were only a few obstacles that required a teammate. Most of the obstacles were the usual obstacles you get at these races. This is a great concept, but they could use a little work on the teamwork aspect. 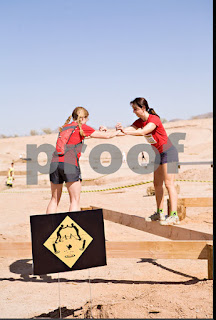 The course: Overall it was good. Fairly well marked, lots of hills incorporated as challenges, but way too short. Only about 2 miles. The website says the course will be 3-4 miles.
Obstacles: The usual - cargo nets, walls. The unusual - a zipline and a trapeze swing. The bad - two of the duo obstacles weren't that great. Irene and I were too short as a team to complete them. The good - a fun waterslide, and I loved the wall!
Organization/Logistics: Great! Wonderful volunteers. Free parking. Race started on time. Best food ever after the race!!
Fun Factor: Irene was my partner. We had a good time, especially since we rocked the wall! Most teams had to have help from other teams to get over it, but we did it on our own. I also really like the smaller races because we can go back afterward and re-do the obstacles and get pictures. It helped that we purchased with a Groupon so we didn't feel cheated by the extra short race.
Would I do it again? If the price is right, yes. Cahoots is one of the more expensive races. We originally weren't going to do it because of the cost, until the Groupon came out. I think they've got a lot of things going for them, including great organizational skills which you cannot do without. I'd like to give them another try. And, I'd do it again just to get another chance to eat that bacon cheeseburger topped with pulled pork! Yummy!

Kiwi Dash, May 5, Phoenix AZ
What makes it different: No niche, just a standard mud run.
Did it live up to its marketing: Yes. It was billed as a 5K full of obstacles with a fun after-party. It was, in fact, a 5K full of obstacles and the after-party was a blues and BBQ festival that you got free admission.
The course: Pretty good. It started out in a mud pit, went through Fear Farm, the Halloween scare park, around the Westside Sports Complex. It's a fairly small area and they utilized it well.
Obstacles: The usual - mud pits, hay bales. The unusual - pushing barrels. The bad - those stupid tires! And wading through an irrigation ditch that was actually very fun but you could only go as fast (i.e. very slow) as the people in front of you. The good - awesome mud (not at all sandy), a fun half-pipe to run up, unique use of storage containers.
Organization/Logistics: Pretty good. The start line was weird. There weren't heats as advertised. We all just lined up and they let a few people through every few seconds. I was not impressed with this and thought the whole race would suck, but it didn't. A lot of people were pissed off by various things - warm water at the water station, no t-shirts, limited access to the hose to rinse off afterward. I didn't mind any of those issues. I thought it was a good event for first-time event directors. They had a lot of volunteers on the course which was good.
Fun Factor: Mid to high. I did the race with Irene. We enjoyed the unusual obstacles and we enjoyed the BBQ afterwards. This was another smaller race that you could walk through again after your heat. The race was on the same day as the Dirty Six. For my money, the Kiwi was much better!
Would I do it again? Sure. They are in the works of planning a zombie run. If my schedule works, I'll give it a go.

5K Foam Fest, May 19, Scottsdale AZ
What makes it different: Foam, presumably. It's billed as a 5K filled with foam and mud and obstacles. Fun games before and after including "foam pit, pull-up bar, mud, limbo, minute-to-win-it games, greased pole, etc."
Did it live up to its marketing:  No. No! NO! It wasn't a 5K and it wasn't foamy. There were NO games before or after. Crappy.
The course: The 5K was only 2.1 miles long. Seriously. WTF? If "5K" is in the name of your event, how do you justify giving us a 2 mile course? Ridiculous. I went in the first wave and finished in 25 minutes. My 5K time is 29:30. I knew something was wrong so I turned around and walked the course backwards to see where I might have missed a turn. No missed turn. I found the race director and asked him how long the course was. He said just about 3 miles. I challenged that telling him that I finished in 25 minutes. He said, "well maybe you are just fast."  Ugh.
Obstacles: They were pretty lame. There were no volunteers at most of them. They had some zig-zag balance beams that people didn't know were for balancing, they just ran through the zig zag. A sign, at least, would have been helpful. The foam wasn't working very well at the beginning (I went in the first heat) and then I heard it wasn't working at all later. There was a dry white tarp that I assume was supposed to be a slip-n-slide but there was no water anywhere. There was no water to drink at the water station when I went through and I hear no water later either. There was a rickety cargo net and some walls and some inflatables that were supposed to be foamy, but weren't. The foam at the Irvine Lake Mud Run was higher than my head, I had to go through it backwards to not inhale it. The foam at the Foam Fest was no higher than my ankles.
Organization/Logistics: Terrible. Volunteers didn't know much. The registration lines were horrible and slow. The course was too short. They weren't completely ready for the first groups. The lack of water made them shut down early. It was so bad that at first they stopped allowing comments on their facebook page, then they took their facebook page down completely. It's still gone.
Fun Factor: There was one fun obstacle where you ran across some exercise balls mounted in a big inflatable. Not fun enough to redeem the awfulness of this event, though.
Would I do it again? Good God, no. I hope they are smart enough not to come back to Phoenix.

I have no pictures and I don't mind a bit.
Posted by Diamond Girl at 7:00 AM

Just wanted to thank you for your reviews, I was considering the Cahoots Challenge but will probably hold off for a while longer- and I TOTALLY agree about the Foam Fest, my husband and I did it and it was the most poorly organized event I've ever done. The one bright side is that it made me realize how well organized most races are! Thanks again.
-Barbara W., Gilbert AZ