We fostered this little guy for two weeks in January while he recovered from kennel cough. 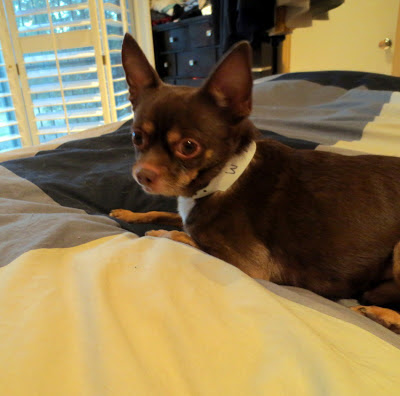 His real name was Ringo but we never called him that. It was always either The Chocolate Chihuahua or Little Shit.

If I wasn't so diplomatic when filling out his kennel card information, it would have read like this:


Here we have a little shit of a dog. He is a pain in the ass, not very affectionate and not very smart. He is aloof and stand-offish, which appears to be more of a personality trait than an outcome of being fearful or previous bad treatment. He will tolerate cuddling when it's cold but that's only because he's seeking your warmth. He will run out any open door and will not come when called nor will he chase you if you turn around and run the other way. He is scared of cats. He will tolerate dogs that you introduce him to while he's too sick to care, but after that, any big dogs he meets will be greeted with growls and lip curls as he has a big case of Little Man Complex.  He isn't very cute with those permanently red-rimmed eyes. His only redeeming traits are that he is 100% house trained, walks well on a leash, and he likes to burrow under the blankets which is moderately entertaining. If you choose to adopt this little shit, we hope you have a good sense of humor and a strong sense of self so you won't feel bad when your dog doesn't like you.

His kennel card ended up just saying generic stuff like he likes to go for walks. :) He was adopted in 3 days. I hope his new people are a better match for him than I was! I've been looking at the website for the past few weeks and the Chocolate Chihuahua has not showed up again, so I guess his new family have decided to keep him and he hasn't run away yet!
Posted by Diamond Girl at 8:53 PM

Perfect description of nearly every chihuahua on the planet. I love every other animal on the planet except these foul-tempered shivering mistakes of an almost-dog. Great for companion to one sedentary or handicapped individual. Better as snake meal.
Most people feel this way. A rabid badger is better company.