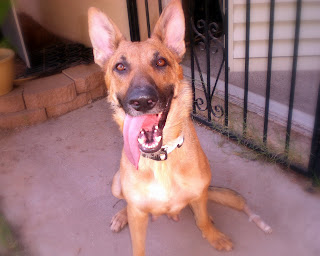 I'm wrapping up the two week foster period with Sable, the slightly sketchy shepherd. She breaks my heart every day. She is so loving, affectionate and willing, but she just has some issues - thus the nickname "Disable" - that will make her an unlikely candidate for adoption in a shelter environment. 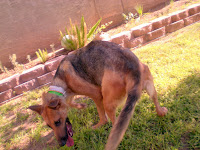 First of all, she definitely suffers from canine compulsive disorder, which manifests itself both in constant spinning and excessive itching/chewing of her skin. She primarily spins when she is in the yard with me. If I leave her outside she'll stop spinning, but mostly that's because s 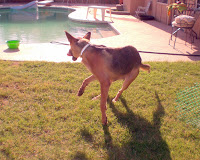 he's standing at the door looking forlorn and wishing I would let her in the house with me. Last weekend I spent about an hour in the pool on Saturday and Sable spent about 50 minutes of that time spinning. I have since figured out that if I put down a towel for her and show her her "bed", she'll relax on the towel for long stretches. Today I was in the pool for three hours (hello, skin cancer...) and she was only spinning for about 3o minutes of that time. Exe 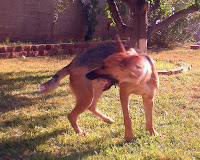 rcise also helps minimize the compulsive behaviors. I have been taking her for a mile walk every morning and two miles every night. Pat pointed out that the spinning really doesn't hurt anyone so it's not a reason to not adopt her. However, right now there are 117 other dogs to choose from at the shelter - why would you pick the one that is spinning so much that she looks like an escapee from the mental ward? And even though it's manageable, why would someone choose such a high maintenance pet? And with behavior like this, she won't last long in the kennels before the shelter staff needs to pull her for a break. Hopefully that break doesn't involve euthanasia.

Her second issue is the "happy tail", which is where she wags her tail so hard against the wall 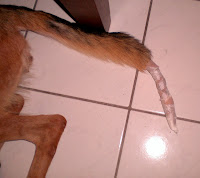 that the skin splits open at the tip of the tail and bleeds. A lot. This is also manageable by keeping her tail wrapped in gauze and surgical tape at all times. I re-wrap her tail every other day. I was doing it twice a day, but I eventually perfected the art of the wrap and the materials to use for it to stay on. Again, with 117 other dogs to choose from, why would someone want one that is so high maintenance?
Third, she has a tendency to bark at strangers. This is a good trait for when I'm walking her at night - I feel very safe with her - but it's not such a good thing when you're looking for a home. This is a big problem with shelter dogs. When she barks, she is very intimidating and she will scare away the adopters. Perhaps she is only barking to protect me and in the absence of someone she considers "hers" she'll be more accepting. She did accept me right from the get-go and the shelter staff seemed to like her, so I'm hoping this is the case.

Fourth, she's iffy with other animals. I have to constantly monitor her with the kitty. It takes a long time for her to warm up to other dogs. She now pretty much ignores Frankie and Georgie except for the occasional attempt to dominate Frankie, which usually leads to me breaking it up before a full fight ensues. Frankie is pretty much on high-tension mode 24 hours a day right now and will choose to be in a different room a lot of the time. Today was the first time she attempted to play with Georgie - the dog that all dogs like - so that's definitely a positive sign. However, the shelter likes to have adopters bring their dogs to meet iffy dogs prior to adoption to make sure they'll get along. But if it takes two weeks for Sable to be comfortable with a dog, that's really not going to work.

The shelter has a program called SAFE (Saving Animals From Euthanasia) where they take kennel-stressed dogs and place them in a permanent foster home until they are adopted. This would be the ideal situation for her but right now there are a large number of dogs already occupying the SAFE foster homes.

Now, don't get me wrong - there are a lot of great things about this dog, too. When I let her out of her crate in the mornings and after work, she melts into a large german shepherd shaped puddle at my feet, wrapping herself around my ankles and asking me to pet her belly. She'll curl up on the couch with you and put her big ol' head in your lap. She's loyal and protective. She listens well and learns quickly. She has gone from jumping all over me to get her dinner to a full minute sit-stay until I release her to eat. She walks nicely on a leash (unless she sees a cat) and I already mentioned how safe she makes me feel. She really could make someone a great pet - but the chances of finding the right someone are not high.

Perhaps you're wondering why I don't just keep her instead of releasing her to an unknown fate. Believe me, I've thought about this a lot and have stressed over the point. I can't do it to poor Frankie - he's my initial responsibility and Sable stresses him out continually. I can't do it to Pat - he doesn't like big dogs as it is and I can foresee a great deal of relationship tension if Sable were to stay. I can't do it to all the other fosters out there. Sable's not the type of dog who will allow me to continuing fostering and there are so many animals that need help. And I can't do it to me. Since Sable has arrived, I've not slept more than five hours a night since I'm getting up early to walk her and staying up late to walk her and to make sure I spend adequate amounts of time with her. Don't think I don't hate myself for my selfishness.

So, an uncertain future is what awaits her. And that's why she breaks my heart. 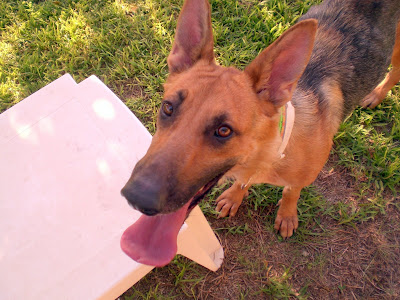 jill, you are the most unselfish foster dog mom in the world. very sad about sable....I am amazed that you have been walking her so much...and loosing sleep! Wow. Sounds like did an amazing job with her. hats off to you.....

Jill, Sable seems to match many characteristics of students in my class. If her new home doesn't work out, I would be more than happy to write her an IEP and add her to my class list. :)