Woo-Hoo! It's My Birthday!

OK, today is not really my birthday. But as you know from the last post, I didn't have much woo-hoo in me on my actual birthday. And besides - all the fun celebrations ar 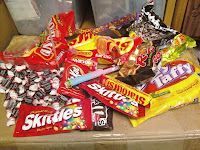 e happening this weekend so as far as I'm concerned, it is still my birthday! Woo-Hoo! 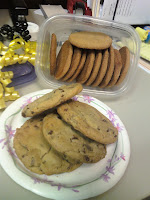 m feeling so much better because I got all these yummy treats for my birthday. There's so much sugar in my system that it's physically impossible to feel down.

A friend of mine pointed out that 37 is a prime number and I'm still in my prime. Since "still in your prime" sounds like something you'd say to your grandma or great-grandma on her birthday, I was a little offended by the implication, but I'm going to run with it anyway.

Most people think their prime is in their early 20's, but I'm thinking my friend is right - my prime is now. My early 20's were pretty much a joke - I didn't do much of anything. I'm almost bitter about all the opportunities I wasted. The only two things I accomplished in my 20's worth mentioning are 1) getting my first dog, thus starting me on my lifelong path as a dog-person and 2) meeting my NFBFs - we've been friends for 16 years now! Yeah, I graduated from college, too, but that's neither here nor there. However, since then I am proud to say I have become a joiner of the highest degree. If there is something going on - I want to be a part of it. If being in your prime means living life to the fullest, then I am still in my prime.

In the past 10 years I have tried the following activities to varying degrees of success:
1. Swing dancing - this was my obsession for many years and through swing I met my husband, most of my Phoenix friends and Ashley Judd. We belonged to a "professional" troupe, we performed a lot, we competed, we traveled.
2. Hockey - it started with roller hockey on the tennis courts, then progressed to roller hockey leagues and then to ice hockey leagues. I never got good, but I played a lot!
3. Soccer - how is it possible that I never played soccer before I was 30? Not even in gym??!! When I was little, my best friend played but it never occurred to me to ask my parents if I could play, too. Now, I play on 7 teams a week.
4. The Pack (nee Puck Patrol) - the Pack is the spirit team for the Phoenix Coyotes. It's sort of like a cheer squad, without the cheering. We ran the intermission games, we shot t-shirt cannons, we hosted all the in-crowd contests and we got to wear cute little outfits. This is one of the things that I am too old to do now. Hell, I was too old when I did it at 31!
5. Rock Climbing - I've only gone a few times but I loved it! Unfortunately, I'm not ready to invest the time and expense it requires.
6. Agility - ah, dog sports! I did take one class more than 10 years ago, but my dogs didn't like it very much and then I spent many years with old dogs. Now that I have Frankie, things are good.
7. Wakeboarding - as you know, I LOVE to wakeboard. This is one of those things I wish I would have tried when I was young - maybe I could have been good.
8. Travel - This isn't to say I didn't travel before but it's been taken to a new level since the invention of Travel Troupe. We go abroad with our friends once a year. We've hit Europe and Central America so far. South America will be added in October. Woo hoo!
9. Book Club - I think I've expounded enough about this here on my website.
10. Fostering Dogs - I put a lot of heart and soul into these homeless pups. It's fun, it's challenging, it's time-consuming, it's tiring and it's so very rewarding! And I always get to have a new dog.
11. Adventure Racing - Again, I've covered this pretty extensively on here, but you should know I'm actively training for the next one. By actively training, I mean I took my bike out on the mountain for 20 minutes on Monday and I didn't die. By mountain, I mean the trail leading up to the base of the mountain.

Things I've tried that didn't really work out:
1. Rowing - despite my high hopes, this was short lived. Getting up at 5 in the morning to drive across town to show a boatful of people how uncoordinated I am really wasn't fun.
2. Roller Derby - I thought this was going to be the greatest thing ever for me. However, before you can compete, you have to practice. And let me tell you, skating in a left-handed circle repeatedly for an hour is so very boring! That was the end of that.
3. Tennis - I was playing every week for a while but my partner moved to California and now I just don't have any free time. Too bad though, because I do have a couple really cute tennis outfits.
4. Sign Language - I took a class. I sucked. I guess I won't be leaving my job to work part-time as an interpreter. Bummer.

And just when I was starting to think that I've done everything out there, I've got plans for two new activities this weekend.
1. Rally Obedience - I had thought this was only for purebred dogs competing in AKC, but an agility friend of mine told me about a venue that lets mixed breeds compete and they are having a seminar tonight. Frankie and I have a lot of work to do on obedience, but I think I'll sign up to compete in the trial in October.
2. Trapeze Class - Yep, that's right! Sunday night is my birthday party and some of my super-cool, non-height-fearing, lots-of-spare-cash friends are joining me for a trapeze lesson. I thought I'd get one or two people who were interested and instead SIX people signed up to play with me!! Check back next week for a recap!
Posted by Diamond Girl at 7:45 AM