Gilmore Adventure Race - Back for Seconds

Saturday, September 25th was Storming the Castle's second annual Gilmore Adventure Race. Last year, the first race rocked our world so we made sure to get in again this year. Our goal, as always, was to not finish last. Our secondary goal was to make top half.

This year the race included paddling, which it has included in the past though it was not part of last year's race. Paddling always makes things more difficult for us because we have to rent boats and convince spouses to take us wherever we are going because kayaks don't fit in my Element and they do fit in spouses' F250s. However, boats were rented and spouses were convinced and we were off to Prescott. We were supposed to be accompanied by Christy and Leah, but Christy's broken hand and Leah's crazy work schedule forced them to drop out. 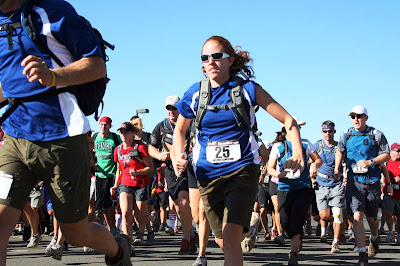 First we had to run across the park to the baseball field where there were a bunch of colored balls with numbers. We each had to find a ball matching our bib number. Irene walked onto the field and the first ball she saw had our number on it. We split up to find the second one and found it right away. All these poor schmucks were still looking for their balls when we left to trade our balls for maps and passports. 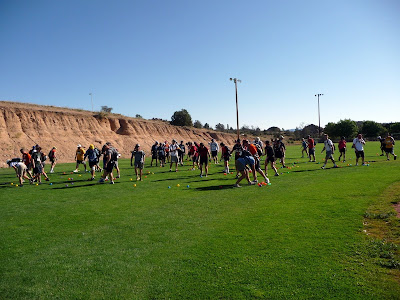 Learning from last year, we immediately mapped out all of our checkpoints for the entire race. This allowed us to look for biking checkpoints while paddling and ensured that once we were set in motion, we would stay in motion.

The first 5 checkpoints were to be located in order via boat. We had to go back and forth over the lake. I SUCK at kayaking so this was a s-l-o-w endeavor. We were part of a large pack to heading for the first checkpoint: 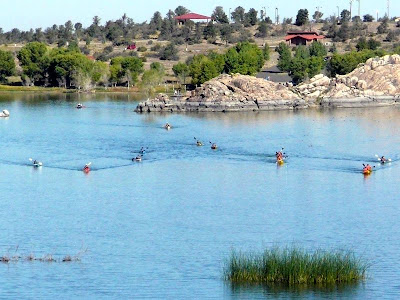 The first checkpoint was on an island across the lake. We saw lots of people all over the front island looking for the checkpoint, but our plotting said the marker would be on the backside of the island so we continued paddling past all these fools. 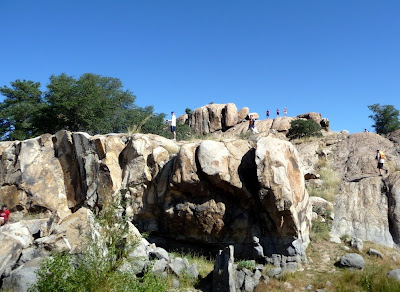 We paddled to this inlet at the back of the island, feeling rather smug for going to the right spot and not getting duped by the people who stopped at the front of the island. There were a bunch of boats already there. 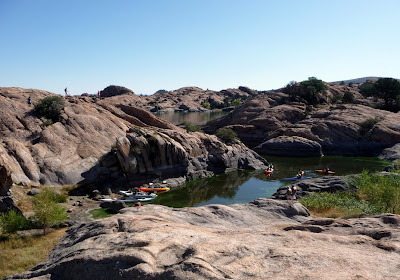 We looked and looked for the checkpoint. We were joined by lots and lots of people. I'm pretty sure all the teams were on the island with us at this point. Lots of people: 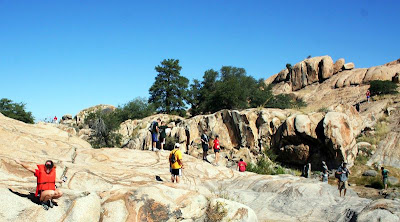 A few teams gave up when the flag could not be found. We would not give up because if you miss a checkpoint, you are disqualified. Disqualified on the FIRST checkpoint? No way. Eventually... finally... a race volunteer showed up and confirmed all our suspicions that the checkpoint flag (and the just-in-case safety tape hung nearby) had been stolen. We were directed to head to checkpoint two. We wasted a lot of time and didn't get any credit for not giving up. Boo.

All the teams were pretty bunched up at that point. Many teams were passing us because I am a horribly slow kayaker. We learned from previous races that the blow-up kayaks are crap. This year we learned that a double kayak is faster than two singles. Always learning...

While crossing the lake from two to three, a girl in a double kayak asked me if I had done the race last year. I said yes. She said she had read my blog and recognized our t-shirts. WOO HOO!! A Little Diamond is famous! She thanked me for all the hints I posted. I was pleased but I would have been a lot more pleased if they weren't passing us while she thanked me!

This is checkpoint four. And yes, the water really was that green. It was full of algae. 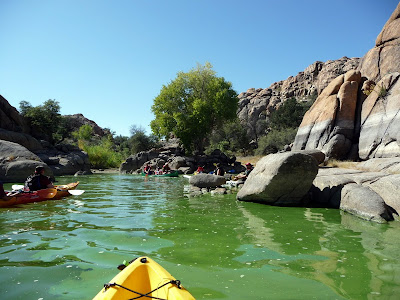 I very s-l-o-w-l-y followed Irene to the last checkpoint. After stamping the passport, the teams all headed back to the dock. Irene, ever the map-genius, directed us to the edge of the lake that was nearest to the TA. This saved us a boatload of time (hee! a pun!) by not making me paddle all the way to the dock and not making Irene run the extra distance back to the TA. We took our chances that 2 lone kayaks would not be stolen in the next five hours and ran off. Once teams saw us do this, a few followed suit. Sometimes following people in front of you can be advantageous. Sadly, our fans (Pat, Brian and the kids) were waiting at the dock to see us.

Our next task was to run for some meters (I forget how many) at 348 degrees from the start line. This led us to an archery range. Oh god. Here we go....

Both team members had to get an arrow into the cardboard target. I went first. The helper-guy showed me how to load the bow and aim it. I kept aiming for #25 and he kept reminding me that my target was #30. Oops. 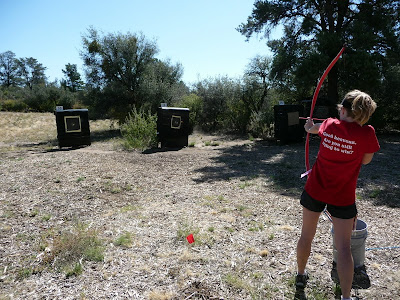 Archery. Yet another thing I suck at. I shot that arrow about a zillion times. If you click on the picture below, you'll see my arrow flying...follow it's trajectory....WAY past #30. Good god. This was gonna take forever. 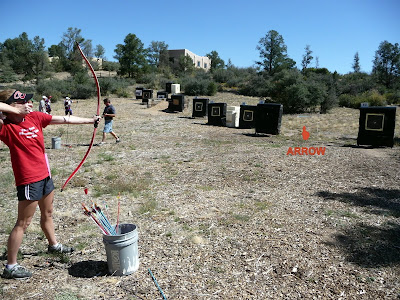 Eventually I hit the building, pretty darn close to that cardboard. Hell, maybe I even hit the cardboard (I don't know, I can't see that far!!) because the guy told me that I was done. Or maybe he just pitied me.

Irene, of course, was good at archery. She's good at everything. It only took her 2 or 3 tries to hit the target. 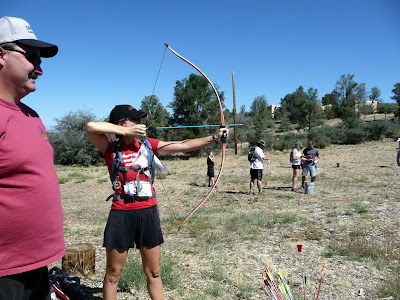 We had to pick up all our spent arrows before we could leave. I think this took as long as it took me to shoot them all. There were A LOT of them and they were NOT close to the target. I suck.

The next part was trekking. We could do the checkpoints in any order. They were located on real trails in the park, so I wasn't too worried about finding them. The trail was easy: 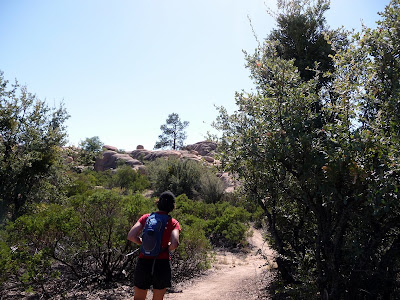 The trails were so easy to follow that whenever the path went over rocks and boulders, there were white dots painted in a line so you wouldn't lose your way. (This was done by the park people, not the race people.) 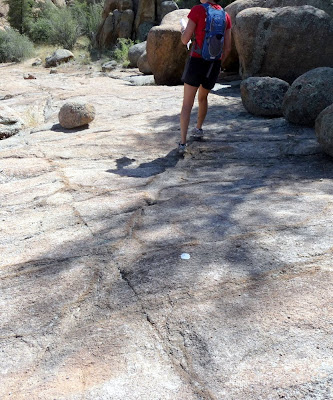 I had told Irene earlier that next time I wasn't going to let her carry the map anymore because she double-checks her plotting and our progress so often that she slows us down. She needs to trust herself, because she is always right the first time! We could save a lot of minutes if we weren't stopping to read the map so much. During the trek, she wanted to take a compass reading to make sure we were on the right track. I refused to stop to let her (I'm mean). As the two checkpoints were both on major trails, I was certain that we'd reach one of them with no problem, even if it wasn't the one that we were headed for and we could re-orient at that time. She was getting nervous and freaking out. And then all of a sudden we see this: 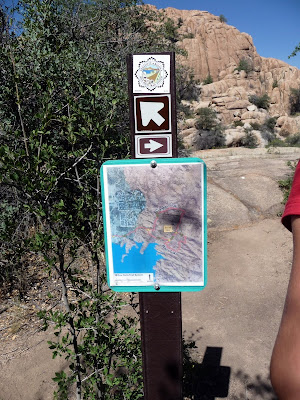 A posted map. On an adventure race. Really?? Again, this is part of the park, not something the race organizers did, but still. However, it calmed Irene down and showed her that we were, in fact, on the right trail. :) We found trekking checkpoint two and then one with no problem. This seemed to be the way to do it, because the people who were doing one first seemed to be unsure of where they were and if they were on track. Maybe the maps were only in the direction we chose?

The hiking was very pretty: 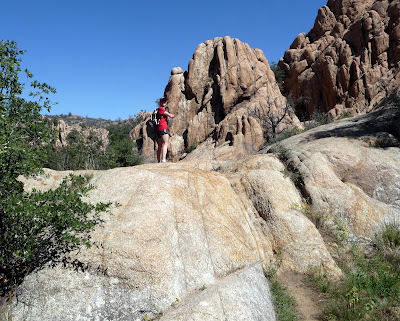 After the trekking, we did another mystery event. We had to transport a marble and a golf ball the length of the baseball infield by rolling them along 1/2 PVC pipes. You couldn't move your feet when the ball was on your PVC pipe. We moved slowly, but we never dropped a ball so we didn't have to start over. Not our most shining moments of mystery events, but it could certainly have been worse!

And then there was biking. Ugh. Biking. Lots of biking.

I am pleased to say that this year I was much better at the biking than last year. Not good enough to take any pictures while out there, but I did manage to bike at least 75% of the time and walk my bike only 25%! The cutoff time for the short course was 2:00. It was getting pretty close to that time when we got our last bike checkpoint. We saw some teams heading out on the bike portion while we were on our way back in, so we took this as a good sign that we were not going to be last. And based on the number of teams we saw still out, it was possible we were top half as well.

Here we are at the finish line. We finished at 1:45. Irene decided we didn't have enough time to get any bonus point checkpoints so the race was over - 4 hours and 45 minutes. 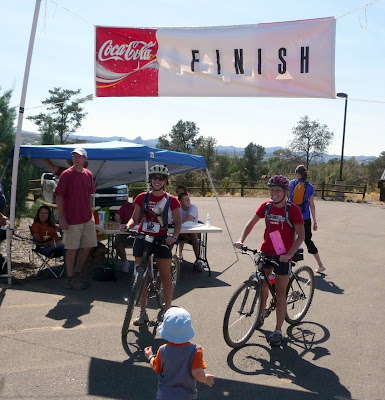 I still don't know if we got top half (hoping we got top third!!) because the times aren't posted yet. I'll keep you updated when they finally post the splits. There are nine divisions and we don't know how we ranked against the others, but we did get first place for our division - 2 person female team! Yay, us! 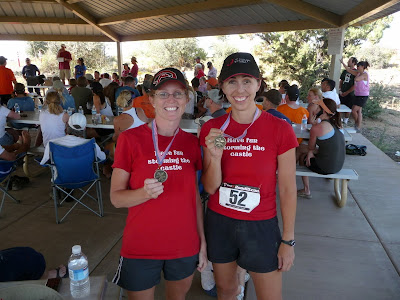 *Edited to add: We got 7th place out of 36 teams! Definitely met the goal of top half! Woooo Hooooo!!!!
Posted by Diamond Girl at 7:55 PM