Another weekend, another urban adventure race.

We didn't storm the castle this time. Christy and I competed as "Run, Run, As Fast As You Can" because we (meaning Christy) made gingerbread man costumes! Only three teams dressed in costume and yet, we didn't win the costume contest. Ugh. Only 20 teams competed in the race and yet, we didn't win. Ugh. The costume prize went to a birthday girl team who didn't have so much of a costume as a piling of all things obnoxious...birthday cake top hats, boas, bright t-shirts with stuff written all over them. The other costumed team were suns - they had orange and yellow sequined clothes and headbands with sunbursts coming out the top. I would have been okay if they had won, because that's a costume...but a lot of crazy things don't make a "costume". Bitter? Yeah, probably. :)

The race itself was ok. We drove down to Tucson the morning of the race so I didn't have any time to walk the city and figure out where I was on the map. This really hurt us, I think. Aimee and Irene competed, too. This was our first time working with another team. We both had our phone support solve some of the clues (thanks to Kiri and Jamie and Steven and Ves!) but we overlapped some work and weren't very efficient.

While we were still mapping our clues, we took care of our photo dares - one of which was to shake hands with a dog. I like dogs! :) 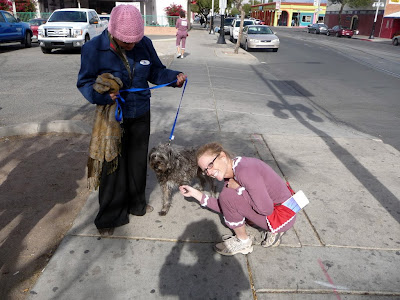 The first clue we tried to find was incorrectly listed on the internet as being at 270 N. Stone. 270 N. Stone is a vacant lot. More research showed the memorial we were looking for was at the police station, which is at 270 SOUTH Stone. Ergh. Wasted some time looking for that one. Thank goodness for Christy's new Droid so we could do more googling on the fly. While we were in the neighborhood of the vacant lot, we knocked out a few more clues. See: we are gingerbread men! Get it? 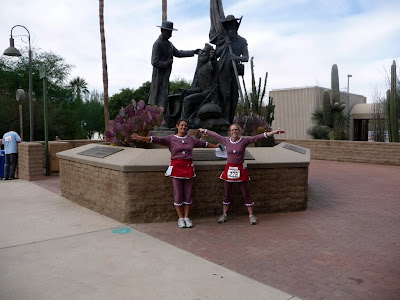 In hindsight, I'd say our costumes needed little brown beanies to tie it all together, but people did know what we were. A few people commented as we ran by.

This is the millenium time capsule which can be found "near the art museum". Or inside the art museum and back out to its courtyard. 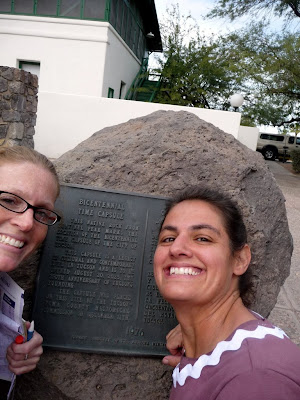 Then on to 270 S. Church. Finally! We had to find a brick memorial with a particular quote. Everyone had a different quote. All during this time, we were leapfrogging Aimee and Irene. Mostly they were one step ahead of us. We got to the police station first, but they found their brick first. Ours was "it's a great day to fight crime." 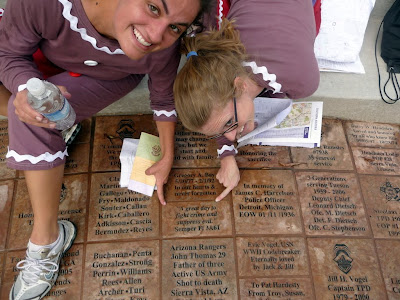 They had also already done their bubble dare, which was getting a piece of bubble gum out of a plateful of whipped cream and chewing it til you can blow a bubble. It seemed a lot easier last time. We had to backtrack to it. Oops. Poor map reading skills on my part.

The downtown tasks were completed. We had a couple clues south of where our map ended. I didn't have exact addresses (the pitfalls of working with another team), but luckily when we got close to where I thought we needed to be we saw what we were looking for: A Door in a Wing. 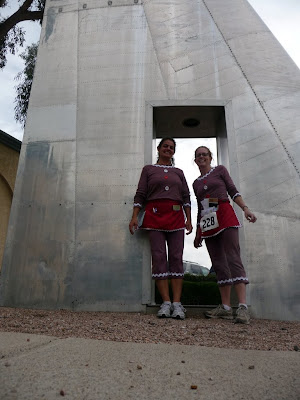 And luckily, there was a mailman pulling up right then who directed us to the Cesar Chavez memorial, which was only one block away. And here we ran into Aimee and Irene again. They were finishing their beanbag toss challenge. Each teammate had to toss little beanbags into three holes on a board, like you would do at the fair. I was pretty sure this would take me forever...and it did. Christy got all three of hers in. I was still tossing. She was handing me beanbags as fast as the race guy could get them to her, but still I could just not get one in the littlest hole. After about three weeks of trying (or maybe just three minutes?), I finally got it in. Aimee and Irene were nowhere to be seen.

This is about where Christy hit the wall. I forgot to mention that she had her tonsils out less than two weeks ago and she has been in bed for the past 12 days. No soccer, no nothing. 2 weeks of lying in bed ill can really take a toll on a body. Or as Christy will tell you, on one's legs. We walked until a bus came and hopped on board. We had to go north quite a ways and we were hoping that it would continue all the way. No such luck. It only took us a few blocks north (and a few blocks out of the way west) before it reached the central station. It didn't save us any time, but it did give Christy a rest.

At the next clue we caught up with Aimee and Irene who were having a hard time taking a self portrait with the really tall sculpture. 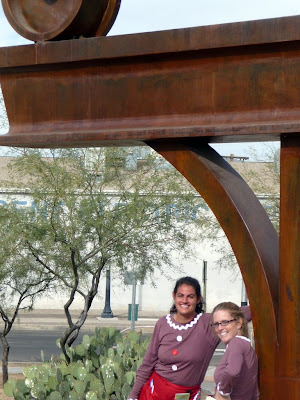 We took their picture, they took ours and we took off towards the last few clues which were at the U of A. We were hoping to take the trolley, but it was broken down in the middle of the street. Bummer.

There was an optional clue to gather 6 non-racers into a human pyramid. This would let you take 5 minutes off your race time. Being loud and bossy sometimes has its advantages. In less than 2 minutes I got these people to do this: 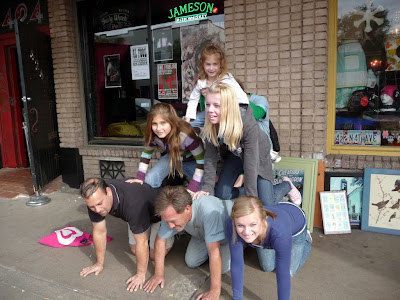 The funny thing is that I don't think the guy on the left was a part of this family. I think he was just exiting the store at the same time as them and didn't know how to turn down my bossy insistence that he get down on his knees and let a child crawl on his back. :) He's got a pretty happening comb-over going on though, doesn't he?

The next clue was at a memorial for Philip Arthur Welsted on the clue sheet, Philip Arthur Welstad on the actual plaque. They had a dare set up where we had to do the wheelbarrow. For a whopping distance of about 10 feet. I thought it was a pretty worthless dare, but Aimee said her arms/chest hurt the next day so maybe it shouldn't have been further. The last clue was a statue of John Campbell Greenway. 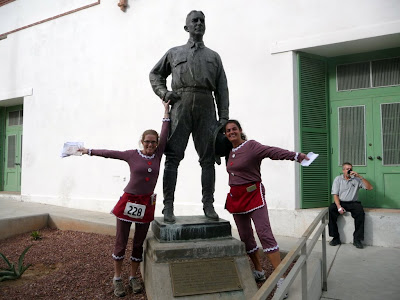 We were still with Aimee and Irene. We took each other's pictures and headed back to the bar, which was 1.5 miles away. Irene hates running. Christy was beat from all the running we'd done so far. Who would win this race?

Christy ran as much as she could. She was pissed that she had to stop and walk. Did I mention that the doctor said she wasn't allowed to go back to work or do anything physical until Day 14? And this was Day 12? Her legs were tired from lack of use, but she didn't give up. We ran most of the way back and created some distance between us and Aimee and Irene. On the way, we passed someone carrying an actual gingerbread house. I wanted to stop for a picture, but we didn't want Aimee and Irene to catch up. We made it back to the bar in just under 2.5 hours. Aimee and Irene came in 2 minutes later.

Our total distance was 8.21 miles with .5 of that on the bus. Don't tell Christy's doctor that she ran just under 8 miles while she was still supposed to be in bed!!

We finished 6th and Aimee and Irene finished 7th. Not too bad, I guess. And we did have fun. And when it was over, we got to eat pizza! Mmmm, pizza.
Posted by Diamond Girl at 4:00 PM

omg, you guys look so cute! you should be bitter about not winning the costume prize.

we really ran 8 miles!! that gives me hope for January- guess I better start running or give your training plan from last year a try.