Last year in the Great Urban Race, our first urban adventure race ever, Christy and I got 3rd place. Since we are not runners, that came as a total surprise! Now that we are seasoned urban adventure racing veterans with a whopping FOUR races under our belts, we had high hopes for this year's GUR. Top 3 for sure! And this year, unlike last year, top 3 wins money!

We went back to our original team name - Storming the Castle - and Christy made us costumes to match. Pretty cool, huh? 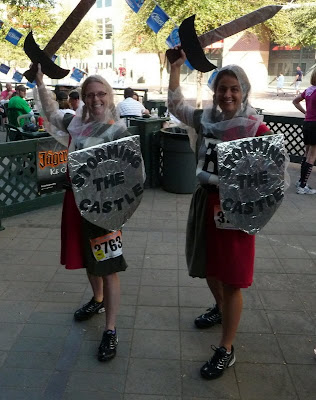 There were 199 teams entered this year (up from last year's 161). At noon we got our clue sheets and we were off and racing. We called our internet support, Kiri - the world's best googler, and started solving. One clue has a picture of a statue to go visit. I thought I knew all the statues in downtown Phoenix, but I was wrong. I had never seen this frog before. However, the background looked like Arizona Center, so we decided to risk it and run there first. I knew if I was wrong that could ruin our chances to come in top 3 and even potentially keep us from qualifying for nationals. But, I was a little flustered about which clue to do first and this at least provided action so we took the chance. And woo hoo! I was right! Frog: 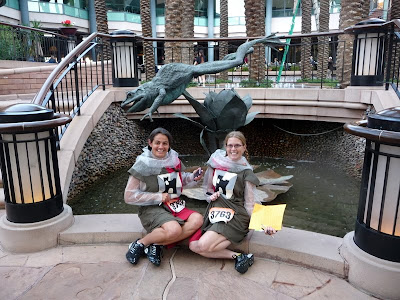 From there we were going to take the light rail and do a few of the clues up Central Avenue. While on the light rail, Kiri checked bus times for us to get to Encanto Park. One was coming shortly and it would be an hour before the next one, so we nixed the Central clues and opted to go to our furthest point. Since the bus seemed to be late and one Central Ave clue was across the street from the bus stop, we ran over and did the eating challenge - get an ice cream cone (which you didn't even have to eat. Weird.) and take a picture with the monkey: 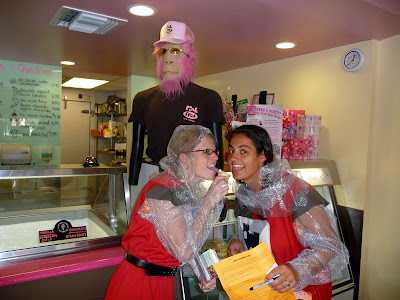 One clue called for taking random pictures of strangers. There was a grid of 9 options and you had to pick 3 to make a tic-tac-toe line. Throughout the race we got 3 strangers wearing sunglasses: 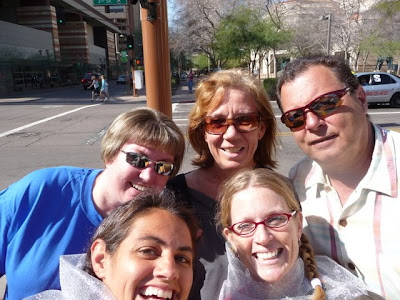 a stranger wearing a Diamondbacks jersey and a stranger bouncing a basketball: 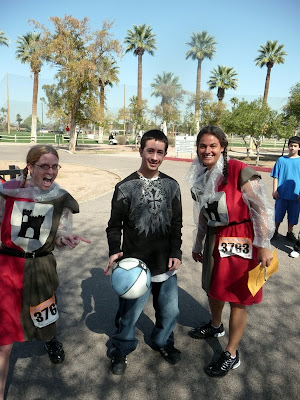 At the park, we met up with our ground support. One clue was to find either a real Valentine that said "Racing my way into your heart" or a candy heart that said "tweet me". Christy's kids have a bazillion bags of candy hearts at home so her spouse found the one we needed and brought it to us. Hey Wayne - ground support is NOT cheating!

After running that far, I was kind of thirsty. We didn't have camelbacks this time, so no immediate thirst quenching. Problem? Nope! Not when there are picnickers around! I saw a family with a whole case of water. I got out a dollar, handed it to a startled man and said, "I'm buying a water from you!" and grabbed a water bottle and ran off. He called after me, "Do you want a cold one?" and pulled one out of his cooler for me. I ran back and took that one, too. :) How often do you suppose a girl dressed in a knight costume forces unsolicited business on a man on a picnic?

At the park we had to do a dizzy bat challenge. I spun blindfolded around a bat 8 times (talk about dizzy!!) and then Christy verbally directed me to a base. The other challenge at the park was to lasso some horns. I let Christy do this one. It only took her 2 or 3 tries. She should be a cowboy! 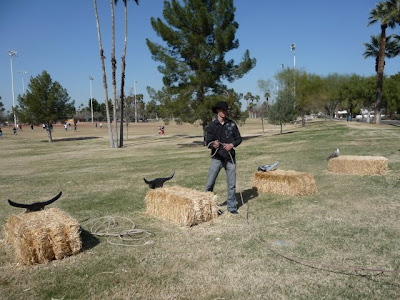 Then we had to go back to Central Avenue. There was one stop halfway there so we opted not to try for a bus. We ran/walked through some neighborhoods. Why hadn't I been working on my running?! Ergh. I kept having to stop and walk. Christy never complains and will run as long as I can, so it's totally me that slowed us down. ERGH.

Walton Park (the location of which Kiri had to guilt out of Wayne): 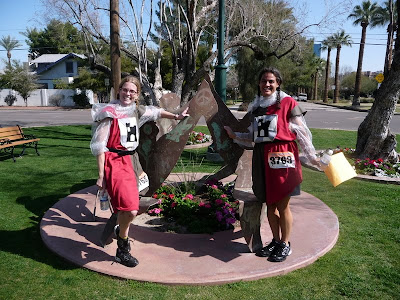 Other than all the running (have I mentioned I hate running?) we were doing pretty well. We stopped at the Heard Museum where they gave us a picture of a Native American statue which we had to replicate by building it out of play-doh. Fun!

NFBF had found a clue for us in the newspaper classifieds and had gone ahead to verify the location. The clue was to take a picture with an authentic 1930-40's trolley. 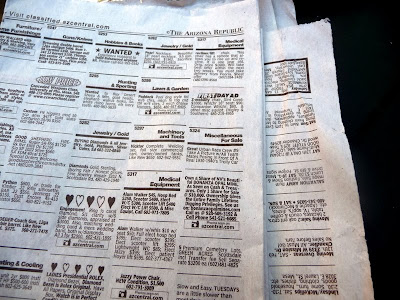 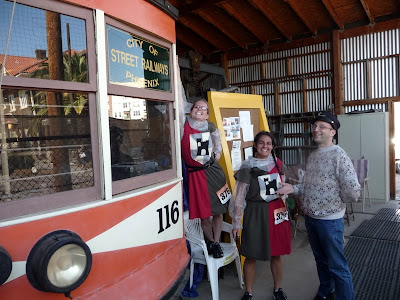 After the trolley, we caught a light rail back to downtown. We waited about 6 minutes for the light rail, but it was worth the wait. It would have taken us 20+ minutes to run that far. Had we been faster runners to, through and from the park, I think we could have been on the light rail that came by 15 minutes earlier. Ergh.

The last stop was the sister cities signs. It took Kiri and NFBF a while to figure out the clue, as Phoenix has about a zillion different sister cities. Christy's kid actually found the exact location by finding the info on wikipedia and then google-mapping the coordinates. They sent me a text of a picture of the pole, but it looked different in real life perspective and I ran us right by it twice. Ugh - more minutes lost. 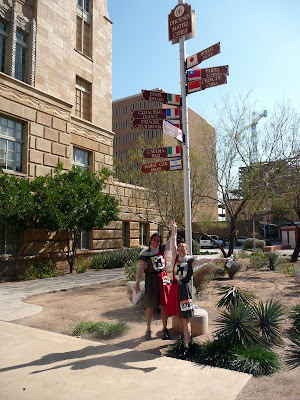 Despite our slow running and our overrun of the sister city sign, we were feeling pretty damn optimistic as we ran the half mile back to the finish line. Yay- there were hardly any people there yet! Woo hoo! Did we win? Second place? Third place?? The volunteers cheered us, greeted us, took down our number and the race organizer came up and said, "Congratulations! If your pictures check out, you are.....fourth place!" Chirsty and I both slumped down in defeat. Fourth?? GRRRRrrrrr! Fourth?! Ergh.

No money. No medal. No nothin'. Frickin' fourth.

Later, Pat asked if we had fun. The response? "Yeah, but that doesn't matter!!!!"

While we were waiting for the costume contest (maybe we'd still win something!), we went to the Diamondbacks Fan Fest which was going on next door. Thousands of people milling around the ballpark and 2 girls dressed as knights. We got lots of weird looks and a few questions. One man said, "Either you're from the Renaissance Festival or we are under siege!" :) 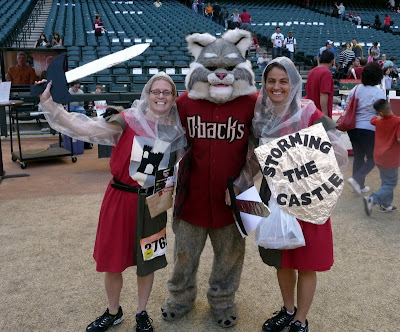 There were about 25 teams competing in the costume contest. We had to get onstage and take turns explaining why we should win. The contest was based on audience applause. Since there were so many teams, they had to have a semi-final round of the top 5 to determine the winners. We did make it to the top 5, but were beaten by these girls, whose team name was "Juan on Juan": 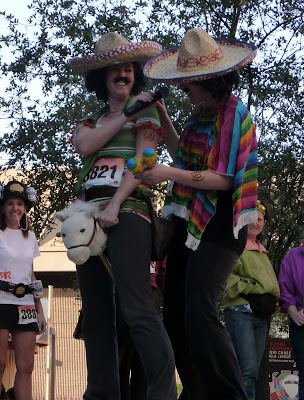 looks like fun. You should check out CitySolve Urban Race Phx. It's this Saturday 2/27.