A Weekend of Second Places

The first second place was good. VERY GOOD! Christy and I (competing as Storming the German Castle) came in second place in the Scavenger Dash. 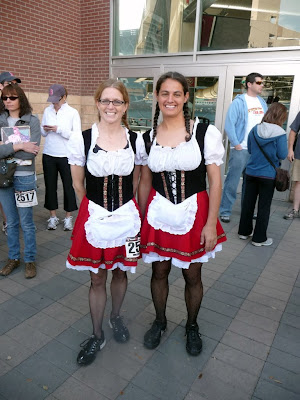 Aren't our costumes cute? We bought them cheap in New Orleans because their zippers were broken. Christy fixed the zippers, took in mine so it would fit and most importantly, added pockets to the apron for our cameras, phones, maps and clue sheets. Voila! Custom-made racing attire!

We started the race at Friday's in the ballpark. At noon they gave us the go to run to the other side of the stadium where our clues were raining down from the sky. Well, kinda like that...they had volunteers throwing them up in the air. We sat down for a minute, called super-star Googler Kiri and mapped the clues. Some of them were fairly easy since I already knew where they were, such as the clue that showed the picture of these kids: 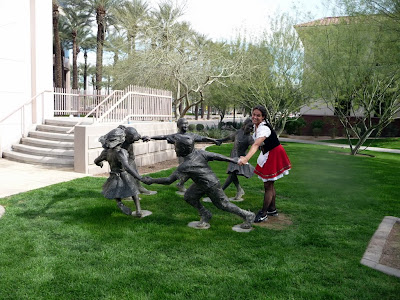 Others required google assistance. Gandhi quote at Release the Fear? Where is the Drowsy Chaperone playing? Beads and Findings? Kiri made short work of the ones we didn't know and we took off running. We were supposed to take a picture in an elevator and also get a photo of getting arrested by a cop or a security guard. My office building has both elevators and security guards.

The security guards said they would get fired if they did that, so we were only successful with this blurry elevator shot. 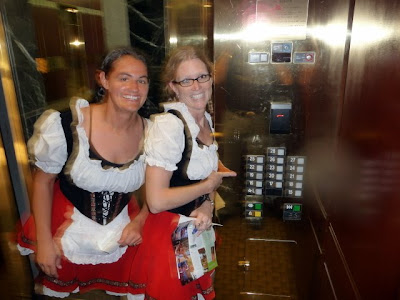 We found a shamrock brick at the Orpheum, where Drowzy Chaperone is playing. 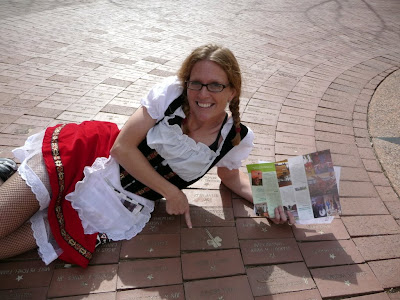 We found Norma Jean's star at the San Carlos hotel. This was another easy one to find for us downtowners. 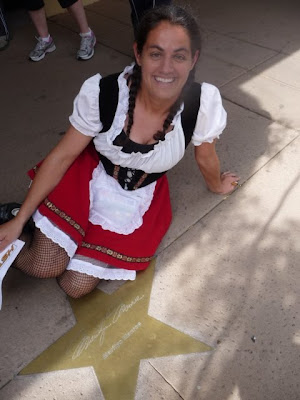 While we were running to the next stop, we saw two policemen across the street. We sprinted up to them and one said, "Let me guess. You want to be arrested, right?" The other guy looked at his partner and said, "It's YOUR turn to take the picture!" Hee. 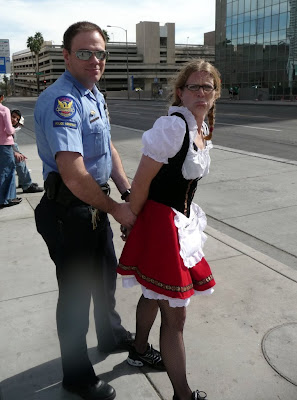 The last clue in the downtown area directed us to the YMCA for a challenge, but it was only available from 12:30-3:30. It wasn't quite 12:30 so instead of wasting time waiting, we caught the light rail and went up to Camelback to Beads and Findings. There were a bunch of teams on the train with us. When we got there, we sprinted across the street and down the block and were one of the first teams to the store. Each of us had to make a glass bead bracelet, at least 7-8 inches of stringed beads and 3 knots. Everyone's hands were shaking from running and from trying to be fast. It was pretty funny. Christy and I finished ahead of most of the teams.

We were hoping to catch the light rail back south because we had to go a little over a mile to Steele Indian School Park. No luck. We ran to the park, which is 2.5 acres, in search of this statue. 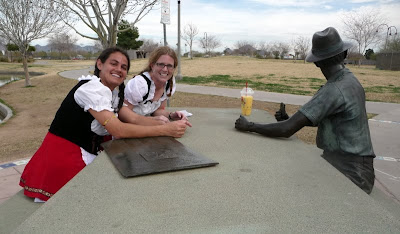 Kiri had told us it was in the middle of the park by the lake and a nice dog walking lady directed us right to it. That's not our smoothie on the table. Some poor man had chosen this table for his family picnic. I wonder how many pictures he had to take!

Our next stop was a little over a mile away. After a brief panic that we were stuck inside the fenced Veterans Memorial Hospital campus, we ended up on 7th Street. We only went about a block before a bus came up! Woo hoo! We took it a little over a mile. I wasn't exactly sure where MacAlpines was (clue: voted best soda shop in the 2006 New Times) so we overshot it a bit. We ran back 1/2 mile. The challenge was for one teammate to either put together a 100 piece puzzle or to eat a frosted cupcake with no hands. Before I could even offer Christy the chance to do the puzzle, she had pushed me in front of a white cupcake and said "EAT!" Ummm....okay! It was delicious!! It wasn't easy to get it all out of the wrapper, but nothing stands between me and my sugar so I got it done. :) Not surprisingly, I did this faster than the other two teams who got there at the same time.

I asked the girl at the counter for a glass of water. She said yes and then proceeded to putz around and chat with some other people. I was very, very thirsty but there was no time to wait for her so we left. The next stop was the Release the Fear statue, made of 4000 tons of melted down weapons. It was a mile and a half away. We weren't so lucky with the bus this time and had to run the entire way. I know a mile and a half isn't that far, but you should know by now that I hate running!

We stopped at Safeway to fulfill the donate 2 cans of food to St. Mary's Foodbank clue. I got in line while Christy grabbed the closest, cheapest cans. Peas. Ew. There were still two people ahead of us in line. I very politely and urgently asked them if we could cut. They both said yes and weren't irritated at all. The cashier was irritated though. He was even more irritated when we ran off without our change or receipt. Grumpy!

We were supposed to take a picture with the Gandhi quote. This was the first quote we saw, but it didn't say Gandhi anywhere. 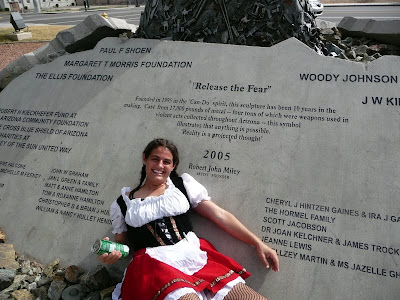 We called Kiri to have her look up the quote online. As soon as she answered, we realized there were a bunch of quotes on the sidewalk all the way around the statue. Duh. We are such morons. But we got the right quote photo: 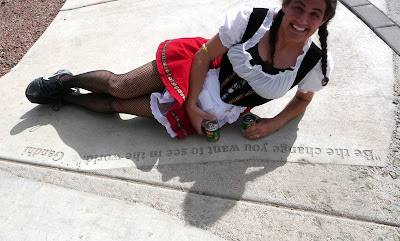 Our last stop was the YMCA stop we skipped earlier. The Y is a tall building so we could see it from where we were. We ran and ran and ran...and it kept getting further away. Ugh. I hate running. Finally it stayed put long enough for us to reach it. The challenge was to sing a few verses and chorus of YMCA....on video. Now the Scavenger Dash have in their possession a blackmail video of 80+ teams. Pretty clever! They gave us a lyric sheet which was good, cuz I really only know the chorus. Kinda. Christy and I kept starting at stopping at different times. However, we danced out the YMCA part like seasoned pros.

We were done with all of our clues. And look! A light rail train that would take us back to the finish! Or is it going the other way? I hesitated for a minute, confused about if it was going north or south. Duh. One way street going south. South! Hurray! We race across the street and around the train. We are at the train door....and it pulls away. Ergh. We decide that if we sprint, and it catches a red light, we might catch it at the next stop. Sprinting. Sprinting. Sprinting. Breathing hard. We see it pull away from the next station. Frick.

So we run all the way back to Chase Field. We finished the race in 1:45. Rick, the organizer (who knows us from adventure racing...which we aren't so great at) looks incredulously at us. "Are you DONE?!" he asks. I think he thought we were there to ask for help or to quit. After assuring him we were, in fact, done, he tells us we got second place!

The winners came in at 1:41. They were on the light rail train that we just missed. Oh, so close! Third place was 11 minutes behind us. Wow! Second out of 80+!! Accepting our 2nd prize movie passes: 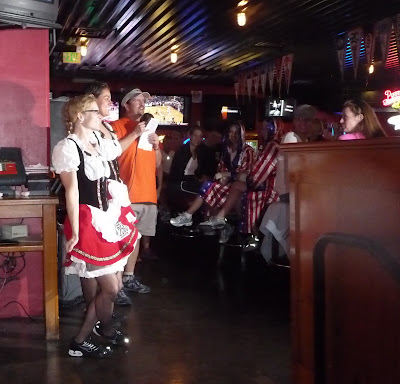 We also came in second place in the costume contest. The Boxing Bi%ches came in 1st. Could have been the make up! 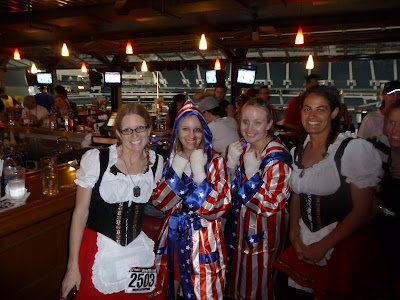 So both of these second places were good. The not so good second places were the Coyotes game that night. They lost 0-6 or something god-awful like that. And then the stupid Colts got second in the Super Bowl. If they had won, I would have won the office pool and $153!!! Jerks.

I think I'll choose to only remember the race from this weekend!
Posted by Diamond Girl at 7:06 PM