This is another one of those posts that Blogger messed up. I spent about 4 hours writing the race recap and then I even went back and proofed it, making a whole bunch of changes. Then I hit "publish post" and Blogger said "please sign in". WTF? Somewhere along the line, I got logged out but didn't know it and kept working and working. When I logged back in, only half of my post remained. I wanted to cry. Maybe I even did.

This happened a few months ago and I'm barely getting over my anger enough to try this again. I'm not going to take a lot of time to re-write all of the stuff that got deleted, so forgive me if you get a thorough beginning followed by a half-assed ending. Boo hiss blogger.

With the end of the clue-solving race season comes the start of the adventure racing season! We kicked it off on May 7th with the Extreme Heat Night Race. (May 7th!! I told you I wrote this a long time ago!)

The race started at REI in Paradise Valley at 6:00 pm. Immediately we were split up with one racer running to the nearby park for a challenge while the other teammate went into REI to do a challenge. Irene felt that I have more energy and run faster so she sent me to the park. Wow, it is a sad state of affairs when the faster/more energetic teammate starts a 1/2 mile run at the front and arrives at the challenge second to last! :( Running sucks!

While Irene ran around REI gathering prices of various merchandise, I got to do this: 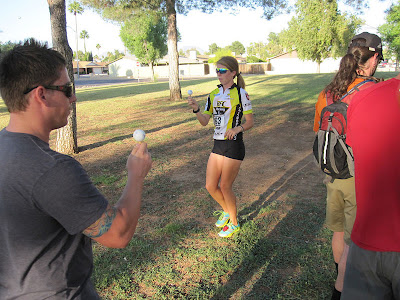 We had to balance a golf ball on a tee, go out around a cone and come back to the start line. If the golf ball fell off the tee you had to go back and start over. I dropped the golf ball right away and then got into the right rhythm. I started second-to-last but I finished the challenge ahead of most teams. Yay! Then I had to run back to REI. Boo. A lot of people passed me. Back to the back of the pack. My running sucks!

At REI we were given our map of bike check points. We had to ride 3 miles to the mountain preserve. My road biking is as awesomely stellar as my running and a bunch more teams passed us. Then I got to flaunt my mountain biking skills as we entered the park. 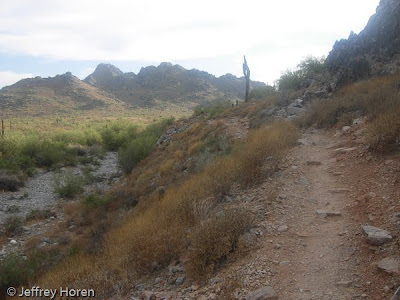 The majority of our adventure races have used jeep trails for the bike portion, or the bike portion was short in comparison to the hike. This race, however, was real mountain biking, technical mountain biking and I couldn't do it. I tried really hard but it was horrible. I was horrible. We had to get to 7 checkpoints, in order, so there were a lot of people in the same place. At one point a bunch of teams took a wrong trail and we got ahead of them. This seems like a good thing, except that as they caught up, they all got stuck behind me on the single-track trail. Half the time I was too scared to pull over because there wasn't a safe-looking place. Also, I couldn't always tell if there were irritated racers behind me because I am not even coordinated enough to look behind me while riding on a road, much less on a rocky, skinny trail! It was horrible for everyone involved. I apologize to all those other teams out there. Not surprisingly I walked the bike A LOT!

There was another racer having as much trouble as I was. The young girl in the golf ball picture looked absolutely miserable. She walked her bike a lot, too. She was a lot faster at it than I was though. I talked to her after the race to find out that she was 17 years and hadn't ridden a bike since she was 14. She's awesome and watching her struggle and beat the mountain helped me struggle through as well.

Irene, of course, rocked the navigating and we steadily got all of our checkpoints though steadily falling further and further behind as we did. I was positive that this was the race where my inability to mountain bike really was going to screw us. We've been so lucky up til now! I tried to keep my spirits up for Irene because I knew I was holding us back. And then it happened. Ugh. I finally crashed. And not like "hit a wall" crashed but like literally fell off my bike and hit the ground crashed. As the sun was setting, there were a lot of little no-see-ums buzzing around our faces. It was so annoying. As I was riding, I very carefully lifted my left hand to get one out of my eye and BOOM! Down I went. It was painful and embarrassing. It was particularly embarrassing because at this point there were racers both right behind and coming toward me on the same trail and they all had to stop for me. Ugh. Irene, however, didn't notice I fell and thus didn't stop for me. I screamed her name but she didn't hear me. Ugh. By this time we had been riding for almost 2 hours and I didn't think we'd ever be done. Alas, we were in the middle of a mountain preserve. Even if I wanted to quit, I'd still have to ride/walk my damned bike out of there. So I let Irene lead me to the rest of the checkpoints while I muttered angrily to myself about how stupid I am to enter these stupid races when I can't even ride a stupid bike.

And then it was dark. I went to turn on my bike light...and no bike light. It must have snapped off when I crashed. Ugh. I did have a headlamp so I used that instead. After we got our last bike checkpoint, we had to either go straight up and over a mountain or around a mountain to get to the bike drop. Another women's team had been following us most of the race, after they realized that Irene was crazy-good at map-reading and navigating. I choose to go over the mountain for two reasons. One, the other ladies would probably give up following us and two, if we were going straight up and straight down, no one would expect me to actually ride my bike, right? Besides, it was so dark that you couldn't see how daunting the mountain really was. It probably wasn't the wisest choice, but it worked - the ladies didn't follow us and I didn't have to ride the bike. As we climbed the mountain we saw only a few bike lights out across the desert, meaning we were pretty close to last. :(

When we finally reached the bike drop, on a cul-de-sac in a neighborhood that abuts the mountain, we had to search the area for index cards with values for various letters. The index cards were taped to flashing traffic cones. You'd think flashing traffic cones would be easy to find at night, but they did a good job of hiding them behind bushes. We had to find all the letters and their values for the word "obstacle." We found the letters and tried to do the math. We were dead tired and our brains weren't functioning very well. I said to Irene, "24+31" and she responded "54". Yeah, that can't be right! We continued like that for awhile, laughing our asses off at our inability to do basic addition and at the look of pity and amazement on the race director's face. However, we did give her the correct answer and she awarded us with the trekking checkpoint map.

This is where my original recap ended, so things will be shorter from here.

The trekking portion included 5 checkpoints that you could do in any order. You could do as many or as few as you wanted, as long as you were back by 10:00 pm. Each checkpoint was worth a point value, depending on how easy or hard it was to find. Since our biking was so slow, we didn't have a lot of time. We chose to skip checkpoint one because it was the lowest point value, and was in the opposite direction of the other checkpoints. I figured we'd get 2 and 3 and then be out of time. But we were feeling good (actually running for lots of it - the moonlight was great!) and Irene was feeling greedy. She was determined to push the time limit as much as possible so we went for 4. I wanted to go back, as we still had to get back on our bikes, do one more bike point and then get back to REI and we were getting close to 10:00. But Irene pushed us on to #5, navigating like the super-star she is. We got 4 out of 5 checkpoints. Woo hoo!

We were second to last back to our bikes, not a good sign. We raced out of the cul-de-sac, picked up the final bike checkpoint (on the bridge over highway 51) and headed back to REI. We had about 10 minutes to get there. We got a little lost getting out of the neighborhood, which really panicked me. Uh oh. We saw some other teams heading back as well, which calmed me down a bit.

We rode up to the REI finish line at 9:57! Plenty of time to spare. The race organizers congratulated us for finishing by the time cutoff. Then they mocked us because Irene's helmet was on backwards! I guess we raced out of the bike drop a little too fast. :) 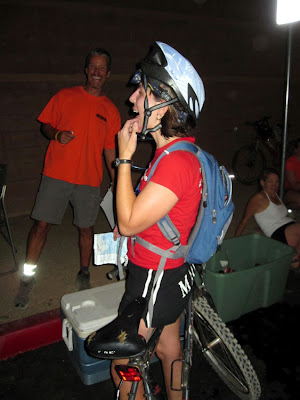 In the end, Irene's greediness paid off. All of those points we accumulated put us in 3rd place! Hurray for Storming the Castle! 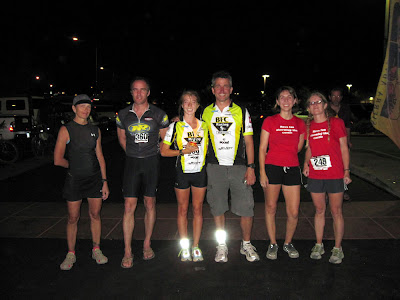 In first place was the other girl who couldn't ride a bike! Yay for her. She must be a damn fast runner because they got all 5 checkpoints and finished 40 minutes ahead of us. When I grow up I want to be her!

That was more challenging, an extreme race at night! Wow ! Congratulations to all the racers who joined for a great job well done. You made it through, that was the spirit ! I guess it is more risky at night, right ? But still, they made it. Kudos ! Looking forward always.