Why Pat Isn't My Race Partner

Every Saturday through July and August, New Belgium is giving away a Fat Tire bike. At 6:00 am, they post a photo of the bike on their facebook page with the bike lock combination. You have to figure out where it is by just the picture. The first one there to unlock the bike wins it. So far there have been 2 bikes in Tempe, one in Chandler, one at the Biltmore and one in Glendale. Last week was my first week to play and I did not recognize the location so I went back to bed.

But today's picture was this: 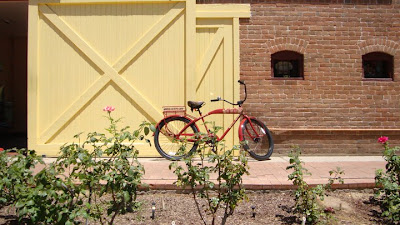 Bam! I knew it right away...because we got married there: 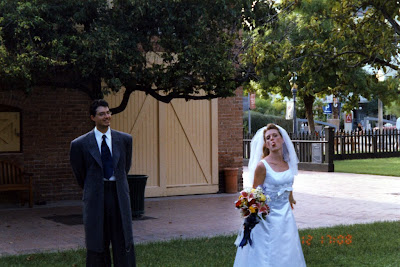 Here's the scene. It's 5:58 am. My alarm goes off, I check my phone. "Pat! It's at Heritage Square!" I say. Heritage Square is downtown, about 11 miles away. There is only a very slim chance I could get there first since we live so far away. I would truly have to haul ass and hope that no one else recognized the location. But Pat says, "We can try, I'll go with you." My response was "Ok, but we have to go right now! And we can't let the dogs know we are leaving." There wasn't time to let them go out to pee, you see, so I didn't want them to wake up.

I grab the first pair of shoes I see, run (silently) to the kitchen to grab my purse and my keys while pulling on the shoes and I'm out the door and in the car. I pull out of the driveway and am waiting in the street. And waiting. A full minute goes by. Wtf? And I'm still waiting. And another full minute goes by. WTF?? This is a frickin' race!! Minutes count! Where is he?!?! I put it in park and go running in to see what the hell his problem is...and he comes ambling out the door. Three and a half minutes!!! Oh my god!!!!!

This is what he did: He got out of bed. He went pee. He got some socks and found his shoes. He wondered for a bit where I was and why I wasn't in the room urging him to go faster. Then he SAT DOWN and put on the socks. Then he put on the shoes. He kept wondering where I was. HUH? Where do you think I would be?? He ambles to the kitchen to get his wallet and keys. As he's meandering through the house, he sees the front door is open and he sees my car in the street. He gets the "uh oh, I'm in trouble" sinking feeling and heads outside. It never occurred to him that I'd already be ready to go. Huh?!?!?

The whole way there we laughed that he could waste 3.5 minutes wondering where I was. Has he not met me? Does he not know that competitive is in my blood? AND THAT THIS WAS A RACE?!?! Oh sweet jesus, if we missed the bike by three minutes, I would have had to kill him. The man has no sense of urgency at all!

As it turned out, we were 5th to Heritage Square which really isn't that bad considering the distance we had to drive to get there...and that Pat wasted 3.5 minutes! We missed the bike by 9 minutes, so Pat was off the hook. The girl who won lived right by there.

So, since we were up super early anyway, we went for a hike. Which I finished about 10 minutes before Pat did.
Posted by Diamond Girl at 9:52 AM

The gap between those-of-us-who-rush and those-of-them-who-dawdle is a wide one.