How many Groupons do you have waiting to be used? I have about 1,000! To be clear, when I say "Groupon", I'm using it in the same way I use kleenex for tissue and band-aid for sticky bandage. Now that is cleared up, I go back to the issue of the multitudes of Groupons piling up in my inbox. I declared Saturday to be Groupon Day.

We started Saturday on Friday night by going to Il Posto where I had a $25 groupon. To get the deal you had to spend $35 on food. I've been putting off using this one because Pat and I don't usually spend that much for a meal and maybe this one would be better spent if we brought a friend or two. However no friend, much less two, could be found so we decided to order big. Pat went REALLY big...he ordered the seafood pasta special that was $25: 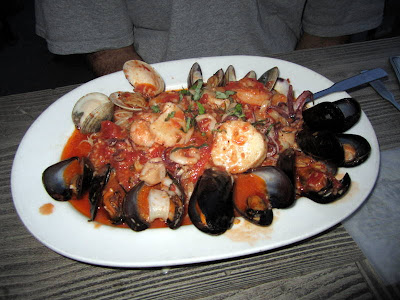 There really was pasta under all that seafood. The scallops were super yummy. I ordered big, too, but not THAT big! I got a Thai chicken pizza, which usually I would split with someone. 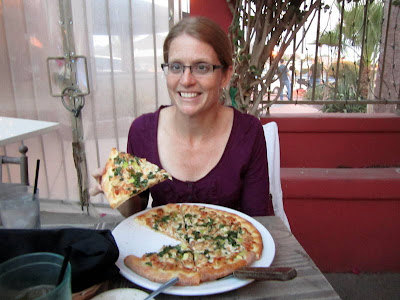 It wasn't that good. The "spicy peanut sauce" was really just peanut butter. Boo. I should have gotten the ceviche or the calamari like I usually do, but they are both less than $10. :) 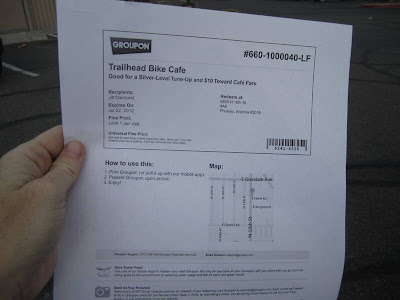 We took my bike for a "Silver-Level Tune-Up" at the Trailhead Bike Cafe. I have an adventure race on August 13, so I thought it would be a good idea to get my ride as fit as can be. I need all the help I can get in the biking department! This groupon also included $10 at their cafe. 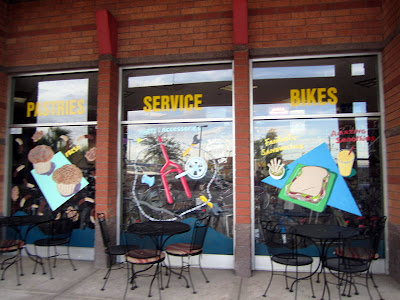 Pat got a cherry danish that he said was delicious. I got french toast: 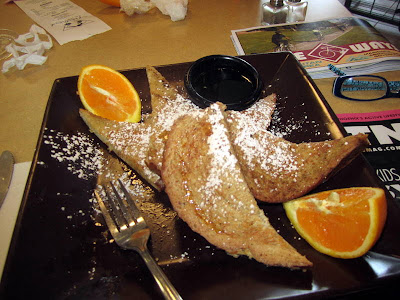 I should have had the foresight to realize that a cafe in a bike shop might be a healthy-type place that uses wacky, nutty, wheat bread for french toast and some sort of brown powdered sugar to go on top. C'mon, people. French toast isn't supposed to be good for you! I should have gotten a blueberry muffin and a strawberry-banana smoothie. Boo. Two for two on bad decisions.

Next stop was Bella Labs for teeth whitening. 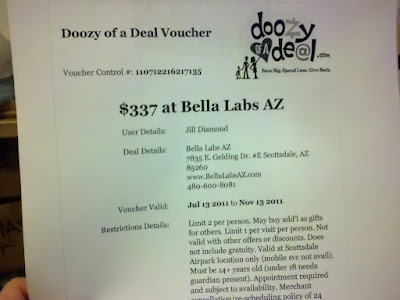 I bought a groupon for each of us and made appointments for 9:00 and 10:00 am. We got there really early. We were in the Scottsdale Airpark so we decided to walk by the airport to waste some time. We got to see a few planes take off and land. And we got to sweat a lot, too. It was really hot already!

Pat's appointment was first. The voucher was for three 15-minute increments of whitening. They paint your teeth with bleach-y stuff, then shine light on it for 15 minutes. The bleach-y stuff wears off quickly, thus the three 15-minutes instead of one 45-minute treatment. Pat fell asleep during his treatments. :) Brand new pearly whites: 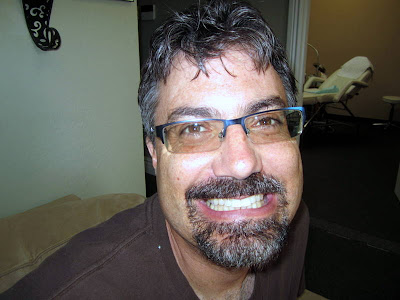 After two of the treatments on my teeth, the lady said that I didn't need a third cuz my teeth were pretty dang white already. :) She gave me a take-home paint pen kit for Pat to use instead of doing my 3rd treatment. 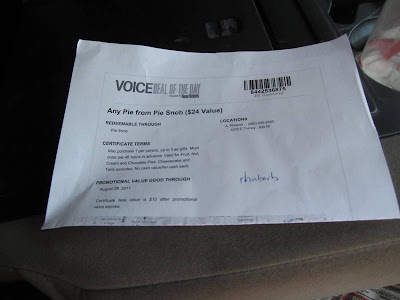 Pie Snob, what a great name! I bought two of these groupons in anticipation of the pies being really yummy. I've been hoarding the pie groupons to use for the just the right time. Of course, the right time never came, possibly because I couldn't decide if I wanted to be generous and bring the pie to a party of some sort or if I wanted to be stingy and eat the pie myself, and now they are about to expire. Since this was Groupon Day, I stopped waiting and ordered up a pie.

Pie Snob is housed at a house. Literally. We drove to the address and we were right smack in the middle of a normal neighborhood. It was a little weird. Was I supposed to ring the front doorbell and ask for a pie? This is what I decided to do, but the Pie Snob knew I was coming and she came out to meet me as soon as I got out of the car. The Pie Snob was very nice! She took me to the back of the house where she has converted a 2 car-garage into a fancy-shmancy pie-baking kitchen. So cool! And she presented me with this: 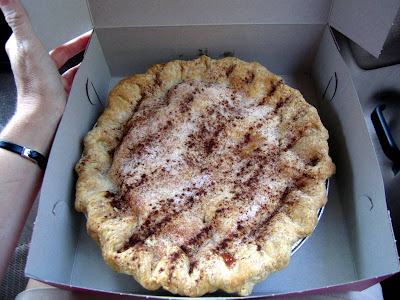 Finally, a good decision! It was soooo yummy!! I love rhubarb pie! Next I'm going to try either a banana cream (I'm kind of a pie snob myself and I can't imagine anyone's being better than mine) or a chocolate cream. Coincidentally, the next theme for book club is Pie in the Sky (we are reading The Sky Is Everywhere) so I'll have to get over my stinginess and share the pie.

Whew. All this groupon-ing is making me tired. Brief nap break.

The last groupon for the day was for Mellow Mushroom. 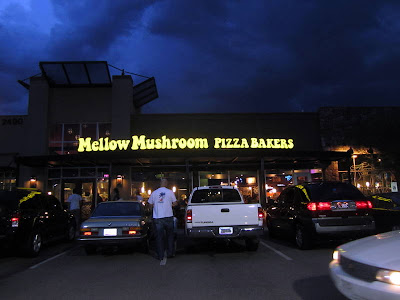 Cool sky, huh? This was in the middle of a lightning storm.

We got spinach-artichoke dip as an appetizer. It was good but it was teeny-tiny and not worth the price. I was thinking I was going to have another less-than-stellar meal, but then we got our pizza: 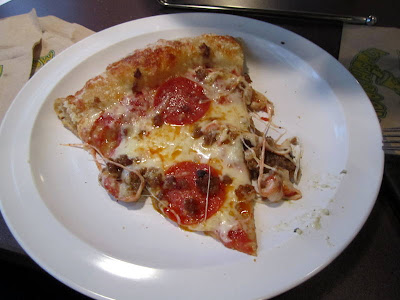 It was pretty dang yummy! Another good decision, putting me at 2-for-4 for the day. We ended the meal with a half-cooked brownie sundae which was also yummy, though strangely served on a plate instead of in a bowl. Mellow Mushroom won't replace Spinato's as my go-to pizza joint, but it was a tasty meal to wrap up Groupon Day!

Happy Groupon Day, everyone.
Posted by Diamond Girl at 8:18 PM

I've been interested in people using their Groupons. I paid $10 to get a $20 gift card from Amazon, which I thought was a good deal. However, I feel like in most cases I would end up spending more money under the disguise of saving money. What do you think? How much did you spend on Groupon Day? How much did you "save"? Either way, sounds like a fun day.