My husband has a new boyfriend. His name is Craig. 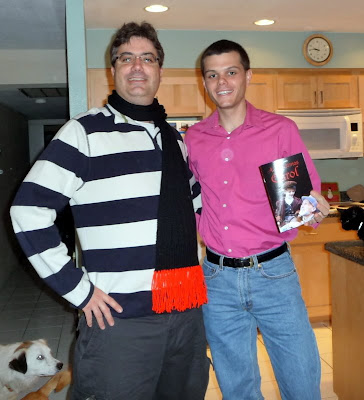 Pat spends a lot of time with Craig. They go to the English pub and talk about bikes. I'm used to it. But things have now been taken to a whole new level. On Friday night, Pat took Craig to see a play. A Christmas play. And Craig wore a pink shirt. I think you can officially call what they have "a relationship." Don't they look cute together?

Is this something I should be worried about? Jealous, even?

Absolutely not! I am not losing Craig. He likes me just as much as he likes Pat! After the play, he came over and we partied like rock stars til 3:30 in the morning! And when I refer to rock stars, I mean the very aged kind of rock stars who live in nursing homes and prefer puzzles to cocaine and hookers. 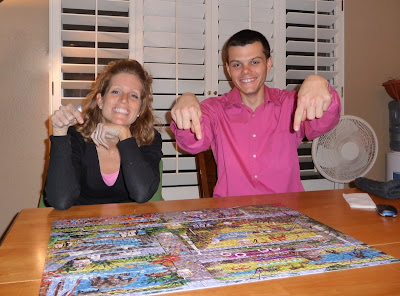 These big smiles were caused by two things. 1) It was just past 3:30 in the morning and we were a little loopy. 2) This was the first of many puzzles that we have completed recently where there was not EVEN ONE missing piece! WOO HOO! (It's the little things in life that are worth celebrating). We've been debating on whether the missing pieces are a direct result of getting what you pay for when you buy the cheapest puzzles on the market or a result of a combination of our carelessness, the cat's tendency to bat things onto the floor and the dogs' tendency to eat anything that falls off the table. Looks like it's the latter.

You may think that doing a puzzle would be a dull way to spend five hours that could be better spent sleeping, but that's only because you've never done a puzzle with Craig. Conversations with Craig tend to be quite interesting. If you ever get the opportunity to partake in a philosophical discussion with him, I suggest you take it. This particular evening we covered, among other things, suicide, tragic vs. non-tragic death, love, relationships and pop music. It was a lot like listening to the Smiths.
Posted by Diamond Girl at 7:21 AM

oMG!you look like ANNE in that pic (OK~ not Anne now, but Anne in 1990) :) Hope to see you soon! (Cross your fingers and pray for no snow here and no freezing rain in Ill!)