I know you're probably thinking that maybe I never made it out of the Grand Canyon. I mean, it's been weeks since this trip took place, right? Well, I did make it out and this will be the final post about it. Which is good, because in the meantime, LOTS of blog-worthy things have happened. I got a new foster dog (Chico!), we did another adventure race (and placed second!), we met Vanilla Ice (this is not a joke!) and Pat broke down our front door.

In order to beat the heat of the day and to get an early start on the drive home, Christy and I decided to leave camp at 5 am. This made Aimee decide to leave at 4 am - because she didn't think she'd hike as fast as us and she didn't want us to have to wait for her. We put out all our stuff for the mules. They pick it up at 7 am and deliver it between 10:00 and noon. We would be up at the top way before 10:00, but we figured we'd get on the road right at 10:00.

As scheduled, Aimee left camp at a little after 4 am with David/Iren and Rob/Monica. Christy and I left at 4:58. 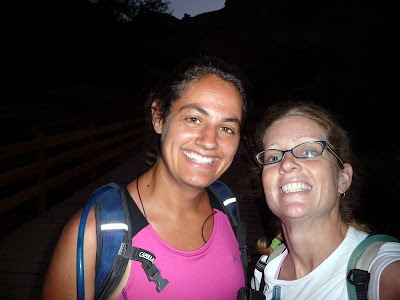 This is the bridge you cross after you leave the village. Notice no huge backpack? It was great hiking with just my camelback and an extra water jug! 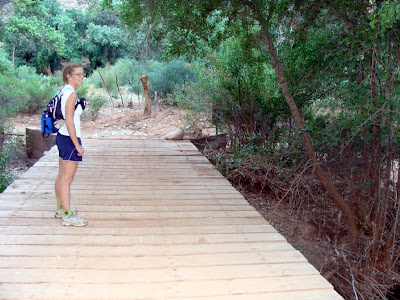 Without the packs weighing us down, we were able to enjoy our surroundings and take pictures. Isn't this beautiful? 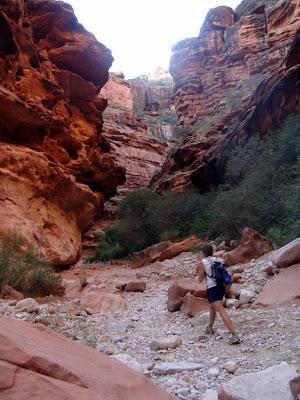 Starting early gave us the benefit of shade for most of the way. The sun was hot, but the tall canyon walls blocked it for us.

Without our big packs, we were also able to take some time to climb on the rocks. I love rocks! I was very happy to play on them. What a great hike! 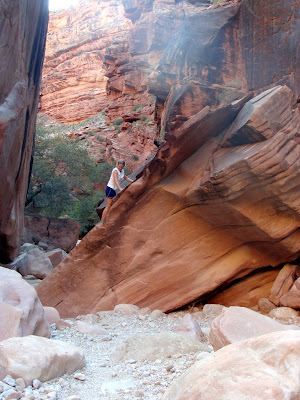 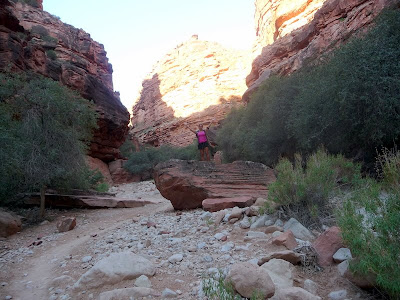 We also took some time to play with this guy. 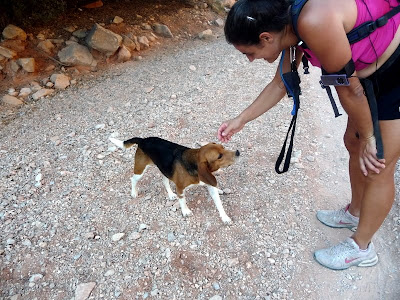 This beagle was the friendliest of the camp dogs. He'd even roll over and let you pet his belly. He accompanied us for a large portion of the hike. He'd show up, say hi then disappear...only to reappear again 5 minutes later further up the trail. After looking at everyone else's pictures of their hike out, it seems that Friendly Beagle accompanied everyone up the canyon that day!

Eventually the sun was high enough to get over the canyon walls. Wow, was it hot. We felt very bad for our fellow campers who didn't leave as early as we did. Their hike was going to have lots more sun than ours did....yowie! More pretty (I have no recollection of seeing this on the way down): 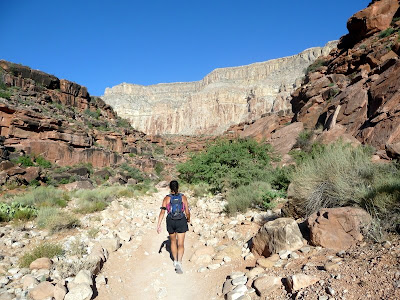 We got out of the canyon and this is what we saw (more views that I didn't get to enjoy on the way down): 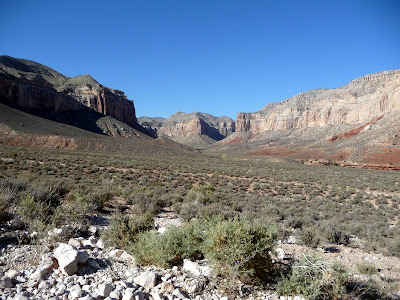 Then came the torture. The last 1.5 miles of the hike are steep, steep switchbacks. I doubt I could have done this with my pack on. It was hard with just a camelback. Again, we were very happy to have the shade and were worried for everyone hiking after us, since the sun was just starting to come over these walls. Holy crap, this is steep: 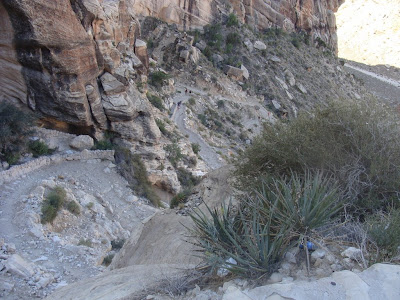 Despite the stopping to play, climb rocks and take pictures, we were hiking pretty fast. We continued to rejoice over leaving our bags for the mules! Our goal was to catch up to Aimee and crew. We did catch and pass Nick, who left at 4:30, but the first group beat us to the top by about 10 minutes. Dang it! Maybe we shouldn't have climbed those rocks! :) The 10 mile hike took us 3 hours and 19 minutes....less time than hiking in!

Aimee was the first person to reach the top. Yay, Aimee!! 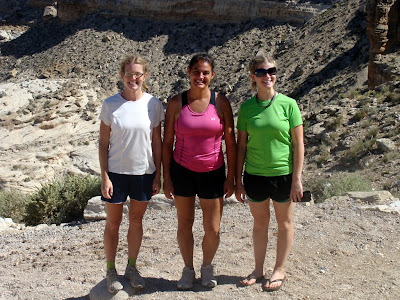 Just to make sure Laura doesn't kill me, I will now mention that she and Craig hiked the 10 miles in 3 hours and 5 minutes...with packs. 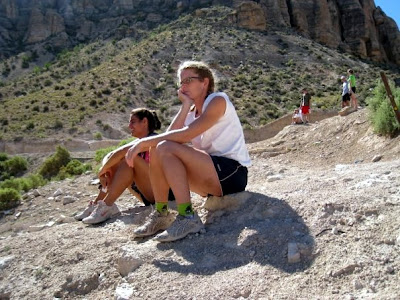 Our group started to assemble. And we waited some more. 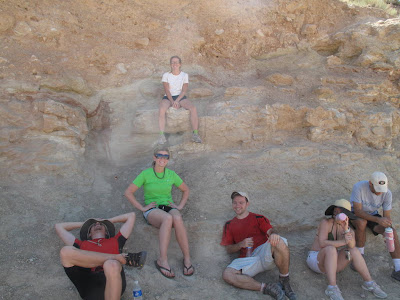 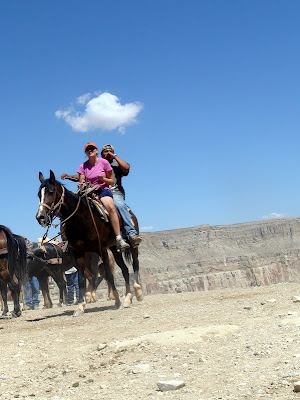 But everyone made it out with no injuries! Hooray!

And our bags still didn't come. Finally....after FOUR hours of waiting (and you know I hate waiting!!) our bags came at 11:52. Ergh.

Loaded up. Drove home.
Posted by Diamond Girl at 11:10 PM