Saturday, September 12 was my 10th Wedding Anniversary. Pat and I had some misunderstandings about how it was to be celebrated. Initially Pat wanted to rent a venue and throw a huge catered gala. I felt this was more expense than I really wanted to go to. Then I suggested a baseball game because Pat has become a fan this summer. No more was said, so I thought this was the plan. I was wrong. On Tuesday before the date, Pat wanted to know how I was coming with the party plans. Huh? I was doing a lot of event planning...at work! 12 events in two weeks, to be exact. But I hadn't been planning a party for our anniversary.

So, with very little advance notice, I threw together a "Wedding Party" and invited lots of people. Pat and I had already planned to wear our wedding clothes for our annual anniversary pictures so I thought it would be fun if everyone got to wear wedding clothes to the party.

"What a lovely bridesmaid's dress! And you can definitely wear it again!!" And it's true! You can wear it again! You can wear it to Jill & Pat's 10th Anniversary Wedding Party! Saturday is our 10th Anniversary and we'd love it if you would come help celebrate the occasion. But this time around you are all invited to be a member of our wedding party. Every single one of you...Bridesmaids and Groomsmen!

Dress Code:
Girls - a bridesmaid dress that has been sitting in your closet waiting for the chance to wear it again (Nicole and Christy - it would be cool if you could dig out your dress from my wedding!) If you don't have one hanging in your closet, then be a good sport and borrow one, make one or visit Goodwill!
Boys - A tux, a suit, preferably with a bow tie or something you'd wear as the groomsman in Pat's wedding.
Jill - Obviously, I'll be wearing my wedding dress!
Pat - Busting out the old zoot suit!
Rules: No anniversary gifts are allowed. Save the environment and skip the cards, too. No bridal party gifts will be given either, so if you were thinking about attending just to get your pair of jammies or your cuff links, forget about it. Also, we won't be buying your dinner, because we are cheap assholes. But we really hope you are able to come join our wedding party!!

We started out at Heritage Square taking our usual anniversary pictures: 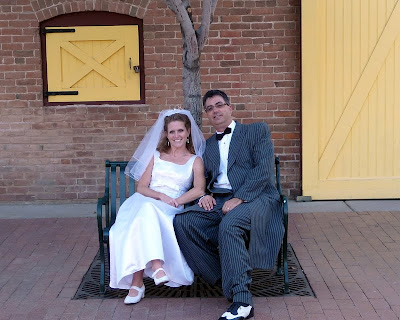 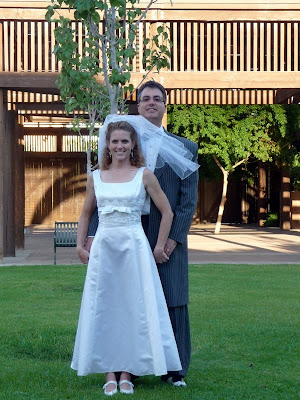 Then our friends started to arrive for the group Wedding Pictures.

Three of Pat's original groomsmen, Steven (the best man), NFBF and Josh (Sean was sick and Brian was out of town): 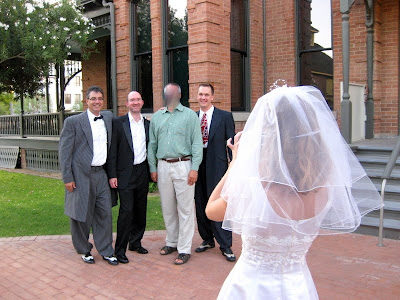 Two of my original bridesmaids, Nicole and Christy (Anne, Amy and Laura all live out of state): 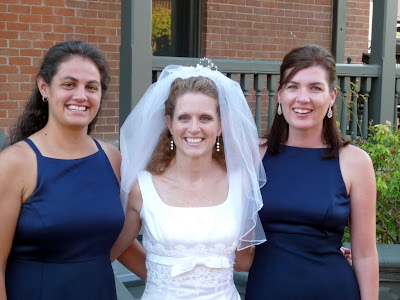 Christy was so excited because ten years later, her dress was too big for her! 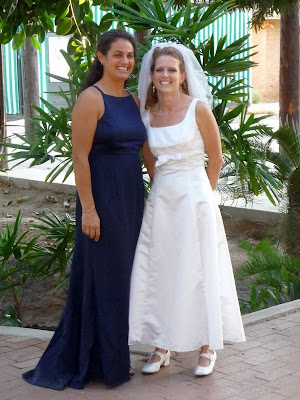 Nicole was not as happy, because ten years later, her size 0 dress would not zip up anymore. But it looked pretty sexy as a backless number! 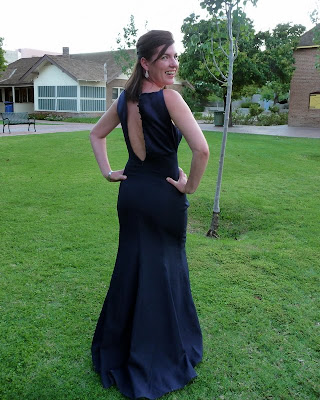 Both girls have babies as the cause. Christy had just given birth two weeks prior to my wedding so she's a lot smaller now that she's stopped having babies. Nicole just gave birth a year ago and the pregnancy expanded her rib cage. What good sports they are to keep and bring out their dresses!!

Pat's family (Pat's mom is also wearing the same dress from the wedding!): 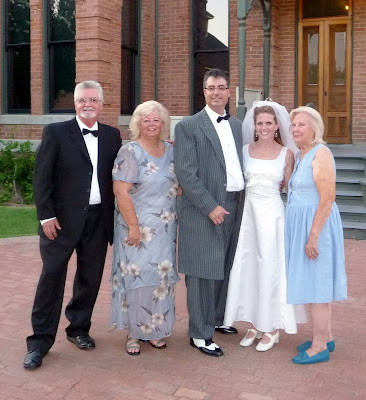 Pat and I with all of our new bridesmaids in their beautiful bridesmaid dresses: 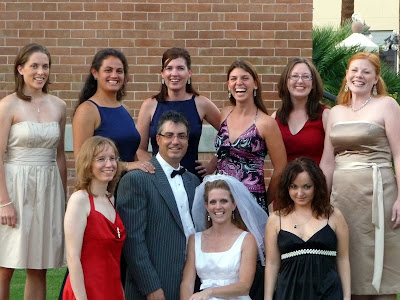 This pictures cracks me up: 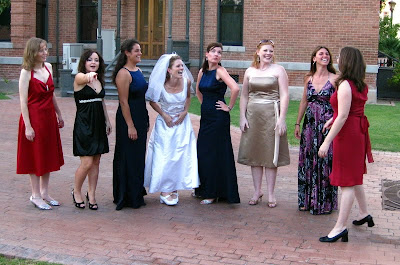 Pat with all his new groomsmen in their varying degrees of groomsmen attire: 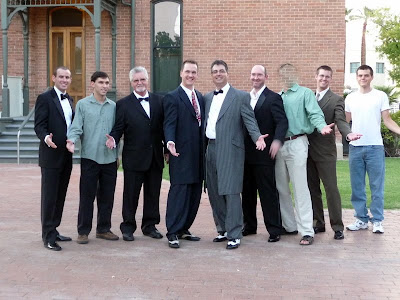 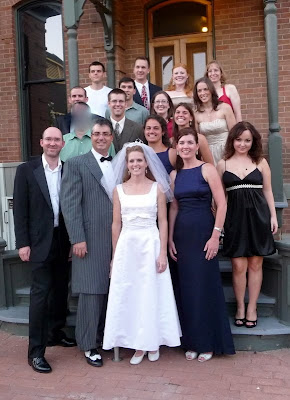 After taking pictures we headed over to our "reception" at Local Breeze, where we accumulated a few more bridesmaids. Aimee in one of her sage green bridesmaid dresses: 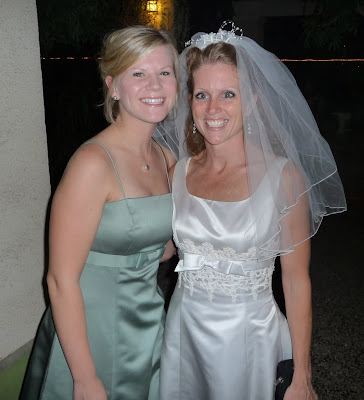 The book club bridesmaids (Kiri let us down with the pretty sundress, when she had promised an atrocious floral velvet bridesmaid dress): 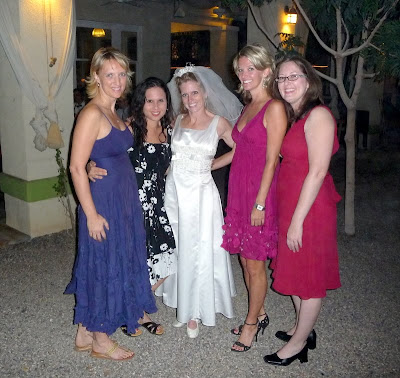 And more groomsmen. Here is Brent in his red, velvet smoking jacket. This boy certainly knows how to Wedding Party: 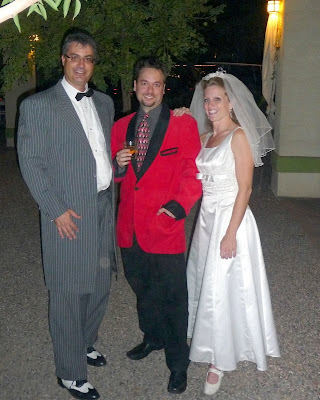 All of these people were present at our wedding ten years ago!! 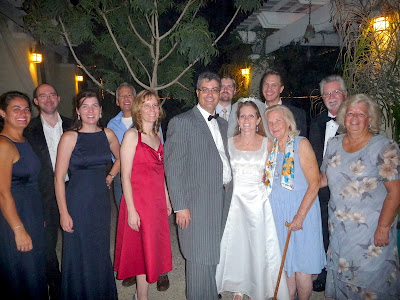 And just as a reminder...pimpin' ain't easy...though these boys make it look like it is! 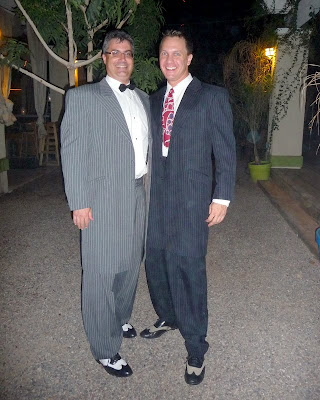 The dinner was yummy, the waiter (a drag queen named Aimee D'Manda Justice, though not in drag so was answering to Zach) was hilarious, the company was great. We had a bunch of tables together on the patio. There were other diners on the patio and I'm sure they thought we were having a real wedding reception. I wonder if they felt bad for us...no music, no dancing, no private venue. :)

And here is something you don't see every day: 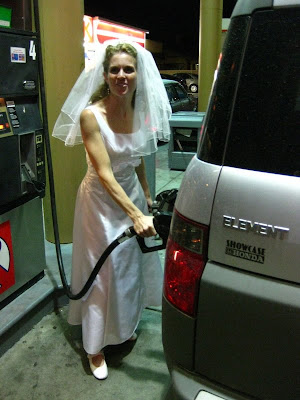 Hey hot Bride, you can pump my gas anytime!

sorry to have missed it! but happy to read (and see) all about it. glad that it all worked out!

Wow, so pleased to know about this 10th anniversary wedding party. I liked reading this post a lot. The pictures are also wonderful. We have also been finding the rooftop event space San Francisco for our 5th anniversary. Might book a venue soon from Eventup.com.


Thanks for sharing your information.The insights are really helpful and informative.
The dress itself is very comfortable and easy to wear.

These are so pretty! This dress is absolutely gorgeous!Find a great collection of wedding dress .