Everyone gets their chance to gloat. Here's mine:

MY PHOENIX COYOTES ARE UNDEFEATED! That's right! A week into the NHL season and we have not lost a game! Woo hoo!

Posting this quickly, in case tomorrow's game makes it untrue...

Ok, so they have only played one game so far. But if you saw the game, you have to admit that they looked great! Speed and puck handling and goals...oh my! Their performance throughout the whole game thoroughly built up my hopes for the rest of the season. Most of these high hopes rest soundly on the shoulders of our new coach. Dave Tippett rocks. I'm so happy that Gretzky turned tail and ran. He was a horrible coach with low expectations for the team. And, not surprisingly, those low expectations were met. But I get the feeling that Tippett has high expectations for the team...and that they will be met. Go Coyotes!! Hoooowwwwlllll!!

On a separate note. I love the new 3rd jerseys, mostly because the new logo looks remarkably like Frankie jumping...if only the coyote's front paws were crossed, the way my coyote does it! 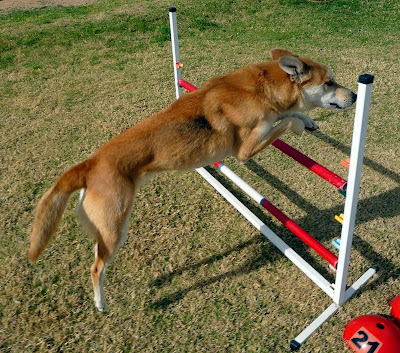 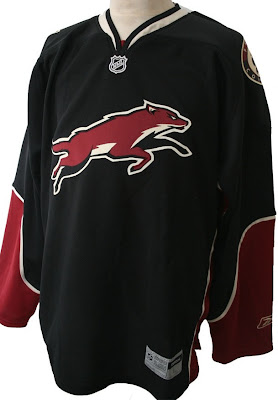 I think a new coach will be great for them - I've always liked Dave Tippett.

You should know some good IP lawyers to make sure that you get some $$ for them using Frankie's "likeness" on their jerseys! :+) R

Only you would see the jersey and immediatly reference your brain to a image from a picture you had seen (it helps that it is a dog picture) you have amazing observation skills.