Last Saturday was the Humane Society's Compassion With Fashion featuring Oliver, America's Next Top Model. As you know, I took Oliver back to the shelter on Thursday. On Saturday I was at the resort early for my volunteer shift and oh-so-ready to see my Bonzai Boy again! I greeted him as they took him off the truck. He was so ecstatic to see me! Ah, does the heart good. 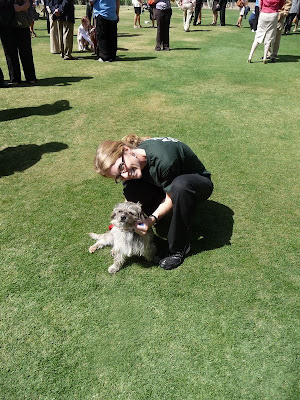 For the first two hours, there was a meet-and-greet on the lawn for all the event attendees to meet and play with the adoptable dogs. Oliver was a superstar! He was friendly with all the other dogs and all the guests. I learned something new about him, too: Oliver LOVES children. LOVES THEM! This little boy was the first to visit. The little boy sat down and within two seconds Oliver was in his lap. It was so cute. 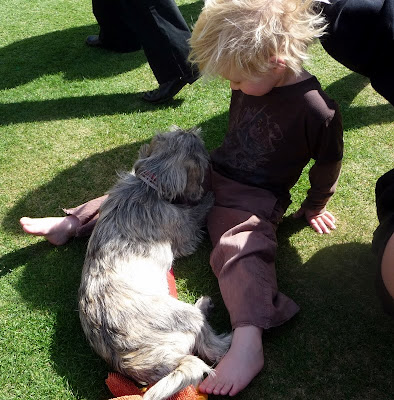 Then these little girls came to visit and same thing...Oliver just could not get enough of their little hands and squeaky voices. 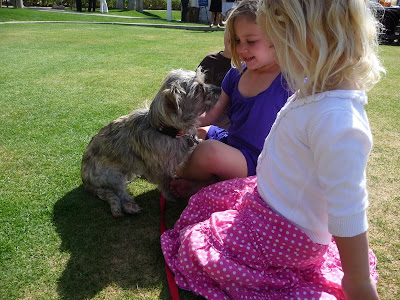 There were so many awesome adoptable dogs. I thought that Oliver would be the belle of the ball with no problem, but that was before I met the world's friendliest miniature schnauzer, Hans; the world's cutest, friendliest golden retriever, Avery; the teeny-tiniest Chihuahua with no inferiority complex at all, Mia; a Great Dane that looked exactly like my fashion-show foster from two years ago; this super-duper cute pomeranian/papillon/fuzzball mix, Sergio: 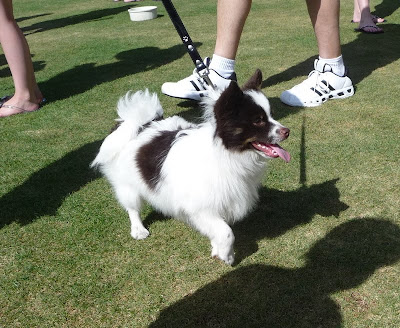 There was an awesome chocolate lab, Creedence, who had impeccable manners and didn't steal Oliver's toy from him even though she wanted to so, so, so, so badly: 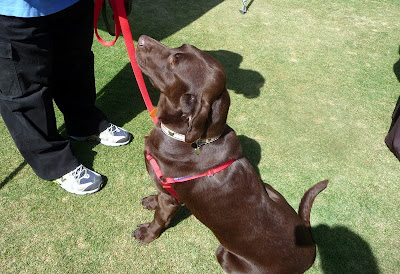 There was a mastiff, too: 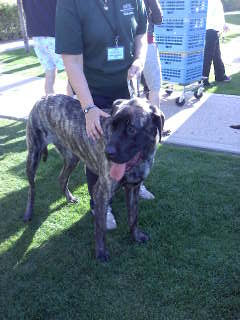 If I forget about the four-month-old, one-eyed, ball of fluff shih-tzu mix named Monkey and the pint-sized three-month-old border terrier/tiniest thing you can think of mix named Brad, then Oliver was the belle of the ball! How could it be any other way? Just look at him! 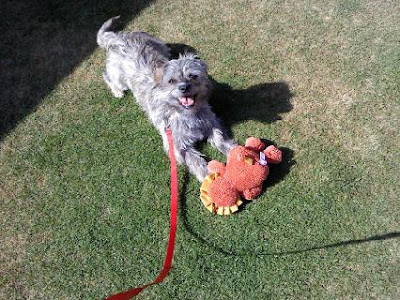 Ok, Brad and Monkey raised the most money, but Oliver was third! People bought $10 raffle tickets for the opportunity to adopt the dogs. EVERYONE wanted those 2 dogs. But almost everyone wanted Oliver, too. 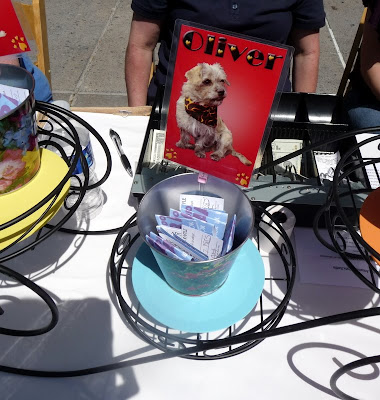 In the end, he had about 30 tickets. I felt so bad for the dogs that didn't have very many people interested in them. Odie, the Great Dane only had 2 tickets. The most shocking one was Sergio - he only had 4 or 5 tickets in his bucket the last time I looked. Let's look at him again:

Seriously? In addition to being this handsome, he was also friendly, well-behaved and loved the kids and the other dogs. I just don't get it! I would have chosen him in a heartbeat!! But no worries, in the end, every doggie and every kitty got a home!

We took a short break while the guests were seated and served their lunches. Oliver was exhausted and fell asleep as soon as I sat down. 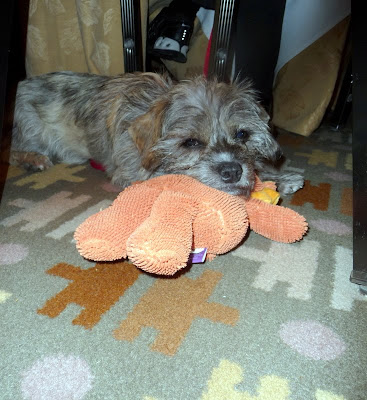 Then we lined up with the firefighter escorts for the fashion show. Oliver followed Odie, the Dane. Odie and Oliver became friends while they were waiting. 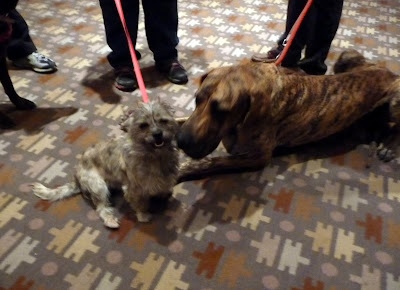 It was pretty amazing - there were 15 shelter dogs lined up end to end and there was no misbehaving by anyone and no barking at all!! What a bunch of keepers!! The AHS folks did a great job of picking this year's models!

I gave Oliver's firefighter a brief run-down on how Oliver heels and sits when you stop. She was all prepared to go out and show the crowd his wonderful leash-skills. I was backstage during the show, so I didn't get to see Oliver walk the runway. I got to see the live video though.

Oliver didn't actually get a chance to walk the runway. Why? Let me tell you! (WARNING- grumpy Child-Hater alert!!) Because all the parents let their kids leave their tables and crowd the runway and scream and grab at the dogs as they walked by. So annoying. Let's give another round of kudos to the AHS staff for picking 15 dogs that could handle that kind of pressure without snapping. Most of them, like Oliver, loved every minute of it. 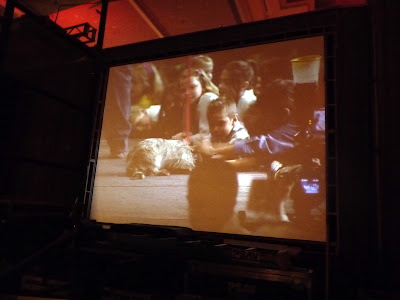 In the end, Oliver was adopted by a stay-at-home grandma who watches her 2-year-old grandson every day. Oliver will be happy to have someone home all the time! Hopefully she lets him play with the little boy! She also adopted a kitten at the event, so Oliver will have a little playmate to replace his buddy, Al. After the adoption was complete, I took Oliver to his new mom and showed her his tricks and training to date. Sit, down, stay, roll over, spin, heel. She looked at me and said, "Wow, I've never had a dog that could sit before." Oy. Somehow, I get the impression that there will be no future training in her house. Poor guy - he really likes it and he's got so much potential! Ah, well...he's got a good home and I'm sure he'll be really happy. Hurray, Oliver!
Posted by Diamond Girl at 7:00 AM